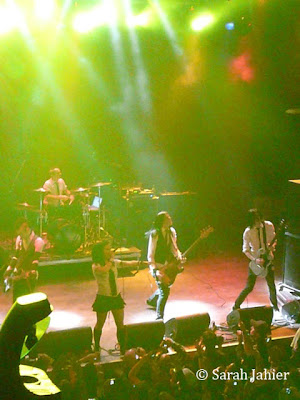 The always amazing TBM!
Last weekend yielded another Sunday night concert, this time with the amazing The Birthday Massacre! I was pretty stoked that the venue was just a short drive from my house, so I figured it would be no big deal getting home late and getting to work the next day adequately rested (this did not go to plan - more on this later). 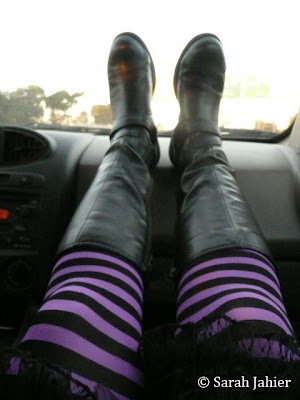 I pulled on my super-cool skeleton girl shirt I snagged from the last Birthday Massacre show we were at a few months ago, slipped into some purple tights and a puffy Lolita-like skirt, yanked on my boot and was ready to go! Mister Spooky and I headed to the House of Blues Anaheim, located in the stroller-hell that is Downtown Disney. We arrived at the venue, dodging screaming tots and tired parents all the way, picked up our tix and went to find some pre-show grub.

After enjoying a veggie sandwich and some fries at La Brea Bakery (which came back to haunt me later), we headed back to the venue. It was still about an hour to doors, but the line was already snaking around and around the venue, so we decided to jump in and just wait. The supporting band Black Veil Brides, who I had never heard of, brought out quite the assortment of tweens and their moms. Hmmmmm...this did not bode well with me and their annoying chatter put me in a pretty foul mood. Wow, do I act like an old lady or what?! Doors finally opened and we managed to snag some free seats in the VIP section. I DID NOT want to be surrounded by excitable young girls who squealed every time a guitar tech ambled onto the stage. 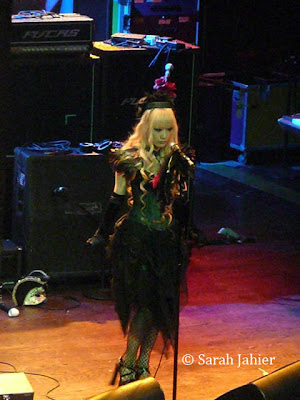 Exo-Chika of Aural Vampire
Aural Vampire, a Japanese electropop/darkwave act, hit the stage on schedule and were pretty frickin' awesome! I'd been listening to AV's CDs a few weeks prior to the show, and they certainly did not disappoint!! I also loved that super-cute vocalist Exo-Chika made an attempt to talk to the crowd even though her English wasn't that great. She was just so darn cute and her costume was amazing! I just wish their set had been longer. My favorite song of the set was "Economical Animal Superstar". 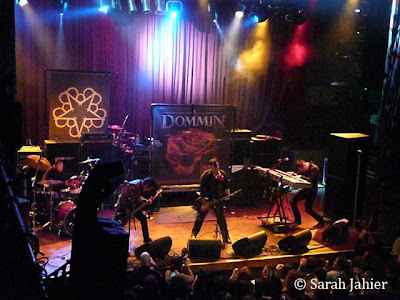 Next on was Dommin, who were more mellow but still put on a good show. They opened with their best and catchiest song, "My Heart, Your Hands", which has been stuck in my head for DAYS. They have a more straight-up rock sound with gothic influences, though vocalist Kristofer Dommin's deep voice reminds me of Glenn Danzig.Yummy! My favorite song was the previously mentioned "My Heart, Your Hands", but "Tonight" was equally good! 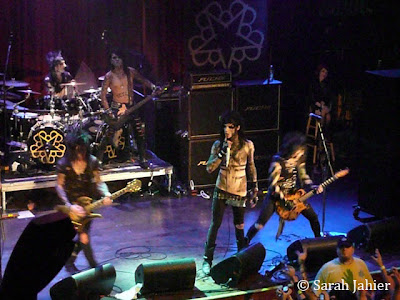 Black Veil Brides
After Dommin's set was over all the tweens rushed the floor in anticipation of Black Veil Brides. This band looks like they are trying to rip-off both Mötley Crüe and Kiss and their music isn't all that great...correction, it pretty much sucks. I seriously don't understand their appeal, but to each their own. They did put on a very energetic and fun show, though ragging on the metal kid that kept flipping them off was pretty douche-y (that kid was my HERO!). They better get used to people flipping them off because I don't think anyone really likes their music besides twelve-year-old girls and their moms. Ummm...I didn't really have a favorite from their set. Like Twatlight, I'll just never understand the appeal this band has for tweens (and their moms). 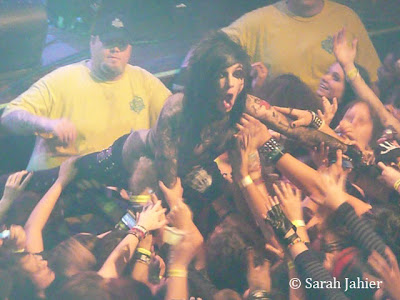 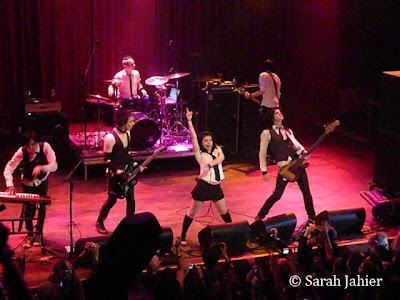 The Birthday Massacre
After BVB, it was finally time for one of my favorite bands, The Birthday Massacre, to take the stage!! This was my first time seeing them as a headlining act, so I was pretty stoked that they would have an extra-long set length. I thought they did an excellent job mixing older songs with their newer stuff, though I love it all equally! They are touring to support their new album Pins and Needles

(absolutely amazing album, BTW!), so the set list had new songs like "In the Dark" and "Pins and Needles". 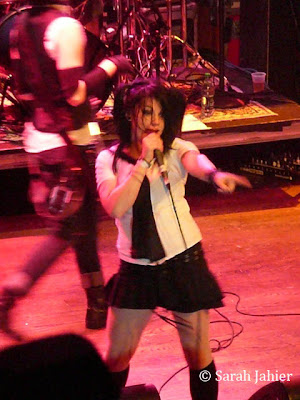 Chibi of TBM
Chibi was her usual cute self and had all the boys drooling over her standard schoolgirl outfit! She, and the rest of the band, always put a lot of energy into their stage shows and Sunday's show was no different! They really rocked the house and seemed to play everyone's favorites. I certainly could not pick a favorite song they played because everything was just so darn awesome! 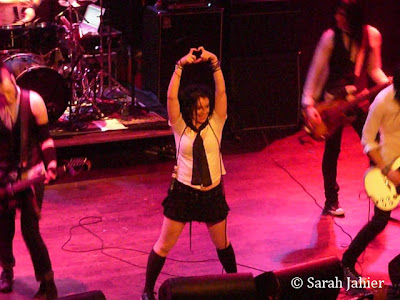 We love you too!!
So I mentioned earlier in the post how dinner came back to haunt me? Well, after the show I got awful food poisoning and was up all night...so there went my plan for getting a good night's rest! I stayed home sick the next day, and the day after that I still felt awful. Ugh...I can't remember the last time I got food poisoning (on a veggie sandwich with NO DAIRY on it, no less), so thanks a lot for breaking my winning streak, La Brea Bakery...more like La Brea Barfery. Ick.

Besides that (and the tween invasion), it was a good show. I even got to meet a cool cat named Q who Mister Spooky (otherwise known in concert circles as The Bloody Lumberjack - here is his YouTube page) has moshed with at other shows. Q has a cool concert blog you should check out called From Pit to Lawn. See you at the next one, dude!

Here are some videos of the show I shot: