Apologies again for not being able to post on a more regular basis, but life is busy busy busy right now and doesn't look like it will be slowing down anytime soon! I'll be trying to post at least once a week as my schedule permits and as I have "blog-worthy" events to post about.

For now, I have some fun concert photos for you to enjoy...Last weekend Mister Spooky and I went to see the aggrotech/electro-industrial band Combichrist with the supporting line-up of Aesthetic Perfection, God Module and iVardensphere. Yes, amazing line-up. This was probably close to our 8th time seeing them and they always put on an AMAZING show. It was our 2nd time seeing Aesthetic Perfection and our first time for God Module (one of my FAVE bands...I interviewed them a while back HERE) and iVardensphere. 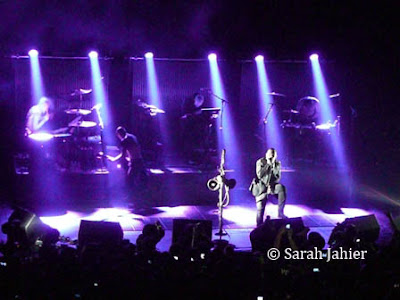 The one, the only...Combichrist
The show was November 7th, 2010 at The Music Box (formerly the Henry Fonda) in Hollywood. We got VFIM (Very F*cking Important Monster) passes which allowed us early entry and a quick meet 'n' greet with the band. They were running a bit late on sound check so not much chit-chatting happened, but it was great to see all the guys!

While waiting around, we got to check out the venue, which was awesome. They had these awesome Hieronymus Bosch-like murals covering the walls, cool chandeliers all over the place and a posh, gothic vibe going on. Surprising since the venue usually consists of hip-hop acts and such. They also had a sweet rooftop balcony with a view of Hollywood Blvd. 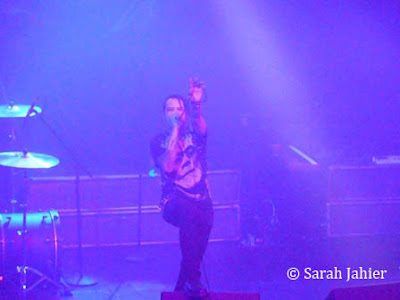 Clint Carney of God Module
Doors opened soon after and the kiddies started pouring in. The show started soon after, and though I wasn't too into the opening band, iVardensphere, they still put on a good show! God Module, with new member Clint Carney taking over for Byron Miller, was phenomenal! Their set was too short in my opinion, and they didn't play my favorite song, "Spooky", but their dark industrial sound really got everyone going. I suspect they had a lot of converts that night! 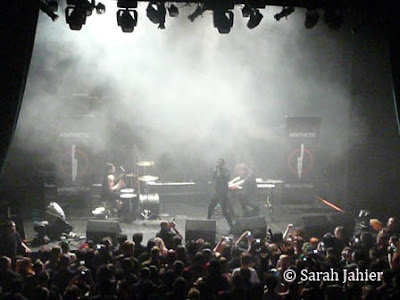 Aesthetic Perfection
Next was Aesthetic Perfection, whom I adore. They really tore up the floor with their electro-industrial music and Daniel Graves put on a wild 'n' crazy show, as usual!! I think half the crowd was there just to see them as they have a less heavy sound than Combichrist. My favorite song of the set? "The Great Depression", of course! 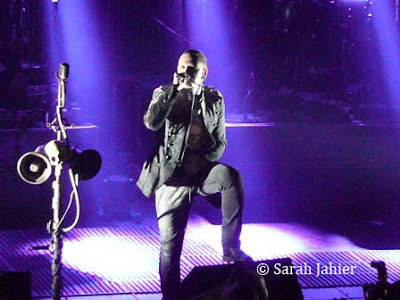 The Andy Show! Combichrist frontman Andy LePlegua
Headliners Combichrist certainly did not disappoint! The Andy Show (aka Andy LePlegua) and members Joe Letz, Trever Friedrich and Z-Marr, plus Wes Borland as a special guest on guitar, put on another skull-crushing show that left the audience bloodied but begging for more. This was the most polished Combichrist show I've seen, as they had fancy-pantsy screens behind them projecting all sorts of mayhem. The light show was intense as well, and I'm surprised no one suffered a seizure from the frickin' annoying strobe lights. Most of the music played was from the new album Making Monsters

, which, to tell the truth, I'm not a big fan of, but some old classics were mixed in there as well. Also, Brandon Schieppati from Bleeding Through made a special guest appearance on the song "Follow the Trail of Blood". Favorite song of the night? Hmmmm...that would be tough to pick but I'm always partial to "Blut Royale" and "Scarred". 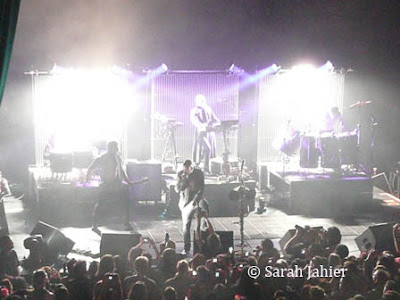 Combichrist
There was an after-party after the show, but unfortunately we couldn't stay since it was a "school night" and we both had work the next morning. Being tired the next morning was sooooo worth it, because this was truly a kick-ass show! 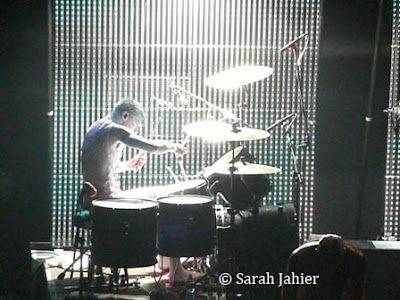 We <3 Joey!
Drummer Joe Letz of Combichrist
See ya next time you come to town, boys! 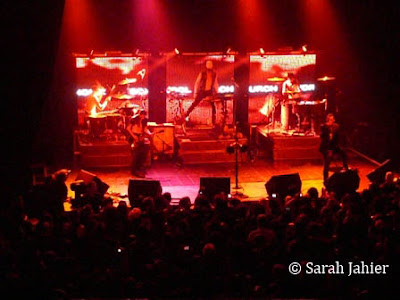 Combichrist
Want more pics? I have a ton of concert pics on my Facebook page!
Want more info on the bands? Check out their official sites below:
Combichrist
Aesthetic Perfection
God Module
iVardensphere
Posted by Sarah E. Jahier at 11:47 AM