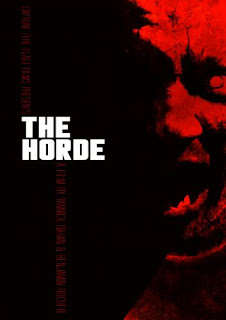 The Horde (aka La Horde in its native French), which was released on DVD recently, received a lot of press, both favorable and unfavorable. It seems that horror fans are split on this film – either they hated it with a passion or named it as one of their “best of” picks for 2010. Horror films that split the horror community right down the middle always intrigue me. It really makes me marvel at how people’s perspectives can be so different – one person may have called it the best zombie movie of 2010, but another said it was the worst POS he had ever seen. Surely everyone’s opinion is different, but films that cause such a wide divide in the horror community are even more interesting to me. So, of course I had to see The Horde to decide for myself whether it was a bloody good time or just a waste of time.

The Horde is about a group of vigilante cops that decide to take revenge on a group of gangsters that killed a fellow police officer. They storm the gang’s decrepit headquarters, housed inside a ghetto apartment building, but soon discover they are out-manned and out-gunned by the ruthless thugs. As the gang holds them hostage, a whole new dilemma presents itself as masses of fast-moving zombies start amassing outside the building. Now the remaining cops and gang members must work together to escape the hungry hordes of undead.


Read the rest of my review on Fatally Yours!
Posted by Sarah E. Jahier at 9:31 PM