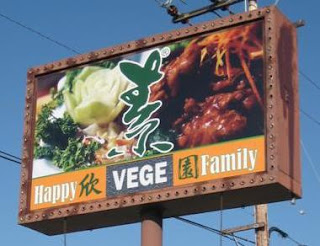 My boyfriend (non-vegan) and I (vegan) arrived on a Sunday night to a near-empty restaurant, however after 10 minutes or so a few more groups of people came through the doors. We were greeted by a very friendly host and excellent wait staff.

I asked our waiter which items on the menu were vegan, and he replied that 99% of the menu was vegan (BTW...the menu is very extensive)! Huzzah! He said the remaining 1% can easily be made vegan by omission of egg. So basically, if you're vegan, just ask them to hold the egg on anything that lists it on the menu. Easy peasy! I love it when being vegan is this easy!

We ordered the hot and sour soup, Mongolian "beef" and soy "chicken" nuggets with orange peel. The dishes don't include rice, so we had to order some on the side. However, either brown or white rice is only an extra $1, so it's not that bad. The service was super-fast and we got our orders within 10 minutes of ordering. 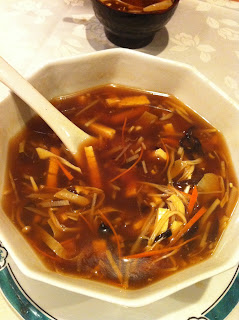 Hot and Sour Soup
The hot and sour soup (we got the smaller of the two sizes) was HUGE, spicy and downright delicious!! It was filled with tofu, mushrooms, noodles, veggies and yummy spices. 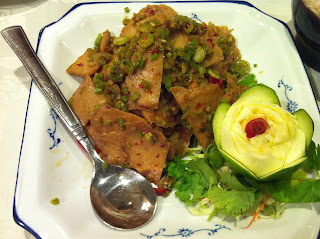 Mongolian "Beef"
The Mongolian beef was really nicely spiced and had quite a bit of heat to it (but not too much). It was a little dry in my opinion and I wish it would have come with some veggies, but it was still satisfying. 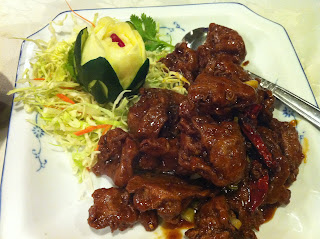 Soy "Chicken" Nuggets with Orange Peel
The soy "chicken" nuggets with orange peel were the real star of the meal though (next to the amazing hot and sour soup!). Perfectly crispy and with a wonderful bite, these were devoured by my boyfriend and me. I would definitely order these again on subsequent visits! 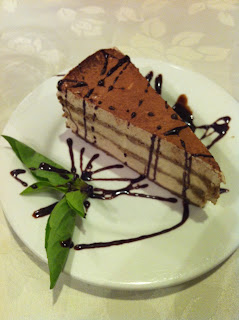 Vegan Tiramisu
After that delicious meal we were both stuffed, but decided that we just had to try their vegan tiramisu dessert! I don't know what a traditionally Italian dessert is doing in a Chinese restaurant...but god bless the genius that thought of putting it on Happy Family's menu, because ordering this was the best decision of the night!! OMG, guys, it was soooooo good! It was silky and scrumptious and very flavorful. I can't wait to go back just for the tiramisu!

Happy Family was a very positive restaurant experience and I cannot wait to go back again. Whenever I have a hankering for some good Chinese food that I know will be 100% vegan, Happy Family will be my first stop!