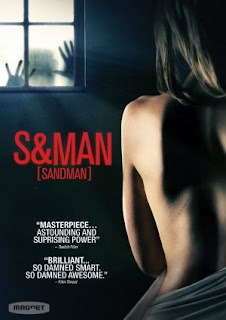 Though the DVD cover of S&Man is extremely misleading (it makes it look like a crappy slasher), rest assured that the actual film is pretty damn brilliant, challenging and powerful. I was surprised to find that director J.T. Petty (The Burrowers, Soft for Digging) made this film and that I hadn’t heard of it sooner. Though it had a festival run way back in 2006, the film wasn’t released on DVD stateside until October 2010.

S&Man (aka Sandman, not S&M Man, like I originally thought!) is a film that explores the seedier side of horror that encompasses the “hardcore” mock-snuff films like the August Underground or Guinea Pig series that are infamous for their shock value and hyper-realism.


Read the rest of my review on Fatally Yours!!
Posted by Sarah E. Jahier at 11:34 PM