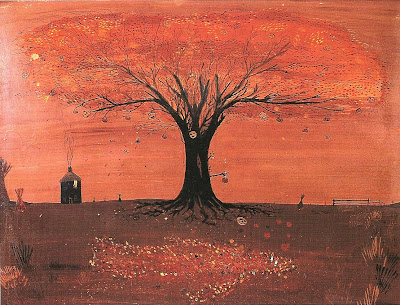 When I learned today that literary icon Ray Bradbury had passed, I was overwhelmed with shock and then sadness. For all you autumn people out there, you know how much I love his books based around our favorite holiday, All Hallow's Eve. From the spectacular Something Wicked This Way Comes (also an excellent movie) to the short stories in The October Country to my personal favorite, The Halloween Tree (also made into a fun animated movie [narrated by Bradbury but sadly only available on VHS] and audio book), Bradbury idolized, celebrated and had a healthy respect (and fear) for the hallowed holiday.

I will never forget Bradbury's poignant writing style, especially in his Halloween-themed works, where his words could conjure up the sights and sounds of bright, crunching leaves, the smell of warm pumpkin spice and the bittersweet feeling of being a kid on the cusp of adulthood around the best time of the year.

No one else could describe October-obsessed people like myself as eloquently as Bradbury (excerpt from The October Country):

“That country where it is always turning late in the year. That country where the hills are fog and the rivers are mist; where noons go quickly, dusks and twilights linger, and midnights stay. That country composed in the main of cellars, sub-cellars, coal-bins, closets, attics, and pantries faced away from the sun. That country whose people are autumn people, thinking only autumn thoughts. Whose people passing at night on the empty walks sound like rain.”

May you rest in peace amongst endless pumpkin patches under an autumn sky, Ray.

October won't be the same without you.
Posted by Sarah E. Jahier at 8:32 PM