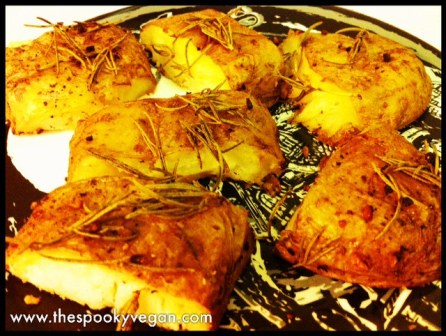 Last night I tried a super-easy recipe for what I like to call Rosemary Smashed Oven Potatoes, adapted from a recipe for Jamie Oliver's Perfect Roast Potatoes. Now, generally when I make oven potatoes I cube potatoes into bite-sized bits and just stick them in the oven, but this recipe called for bigger chunks and a different way of preparing them, which resulted in delicious results!

All you need are:

-Potatoes (small round ones work best, but you can use Russet potatoes)
-Olive Oil
-Fresh Rosemary
-Salt and Pepper
-Minced Garlic

Jamie Oliver's recipe calls for smaller potatoes, but I used big ol' russet potatoes. To start, I scrubbed and rinsed about 5 or 6 potatoes. Now, this next step is where the prep differs dramatically from any oven potatoes I've made. After washing the taters, I threw them whole into a big pot of boiling water with some sea salt for 10 minutes. I left the peels on, but you can also peel them if you like before boiling them. This extra par-boiling step softens them right up and preps them for oven baking. At this point you can pre-heat your oven to 375 degrees Fahrenheit.

While the potatoes were boiling, I took about 4 or 5 sprigs of rosemary (you can use more or less, depending on your taste preference) and stripped the leaves off the branches. In a small bowl I mixed the rosemary leaves, a few drizzles of olive oil, freshly ground black pepper and about 2 or 3 tablespoons of minced garlic. I also added a few splashes of vinegar (Jamie Oliver suggests red wine vinegar, but I used balsamic), which serves to make the flavors of the dish really pop!

After 10 minutes of boiling, I drained the potatoes and, after a few minutes of letting them cool, sliced them in half and then cut the halves into about four smaller pieces (you could also quarter them).

I lined a baking sheet (make sure it has raised edges - an oven-safe casserole dish would also work) with foil, then drizzles about 1 or 2 tablespoons of olive oil on it. I placed all my sliced potatoes on the sheet (flat side down) and drizzled a bit more olive oil over the potatoes. I sprinkled some sea salt and pepper over the potatoes and popped them in the oven for 30 minutes at 375 degrees. We will add the rosemary mixture to the potatoes after the first 30 minutes are up.

After 30 minutes I took the potatoes out of the oven and smashed them with a masher (though even a fork would work for this). You just mash the potatoes down flat so they have more surface area to cook. At this point I also added the rosemary mixture. You wait until this point to add it so the rosemary leaves will cook to a perfect crisp without burning.

Pop everything back in the oven (still at 375 degrees) for an additional 30 minutes and when you pull it out again the potatoes should be a bit crispy around the edges and just loaded with that lovely rosemary and garlic taste! The special techniques of par-boiling the potatoes first as well as the addition of vinegar to the rosemary/garlic mix really amp up the textures and flavors of this recipe...thanks Jamie Oliver!

If you've got about an hour and are looking for some simple comfort food, these Rosemary Smashed Oven Potatoes are an easy, aromatic and satisfying dish!
Posted by Sarah E. Jahier at 2:21 PM