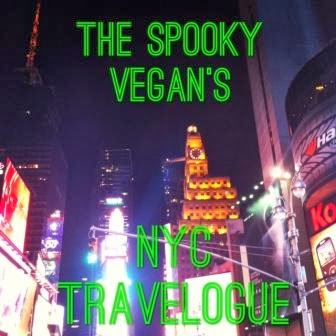 Yesterday I shared part one of my trip to New York City, and below you will find the continuation of my travelogue!

We left off after I had eaten myself silly through Manhattan and Brooklyn, strolled through Central Park and attended the goth/industrial Triton Festival... 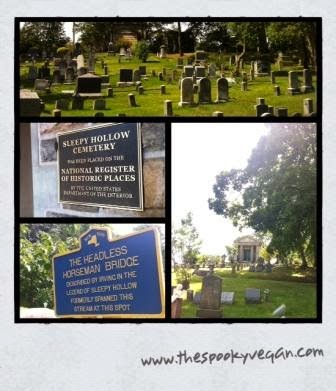 
The morning after Triton Fest we got up relatively early to take the train upstate to Sleepy Hollow! A few people from Triton joined us in our excursion up the Hudson Valley to the home of Washington Irving and his Legend of Sleepy Hollow. I ecstatically toured the old Sleepy Hollow Cemetery and adjoining Old Dutch Burial Ground. I wanted to spend more time there, but it was kinda hot, so we walked and walked and walked until we made our way to Tarrytown, where we had a late lunch before heading back into the city. 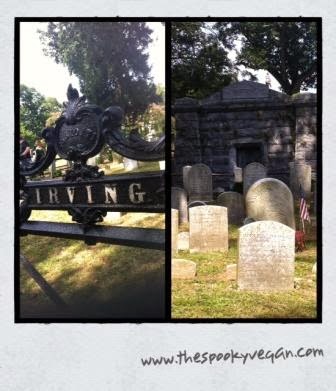 That night was the last night of Triton Fest, and we saw God Module, Grendel and Combichrist! Great festival, all around! New York really knows how to party! 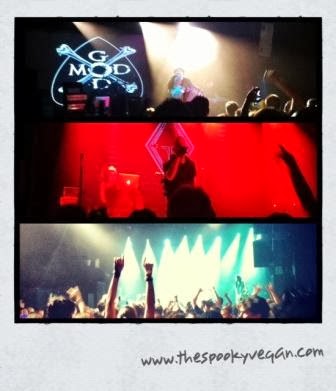 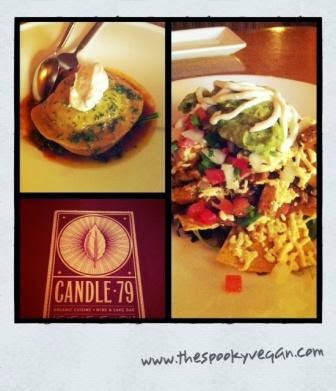 Sunday, we slept in and then ventured out to Central Park again for some strolling before an early dinner reservation at Candle 79. Then…squuuuueeeee…Candle 79!!! This restaurant was on my bucket list previously, and I’m so glad I got to go! It was an amazing experience! For appetizers, we ordered the Saffron Lobster Mushroom Ravioli and the Angel’s Nachos. Both were amazing, but we both agreed the ravioli were heavenly! 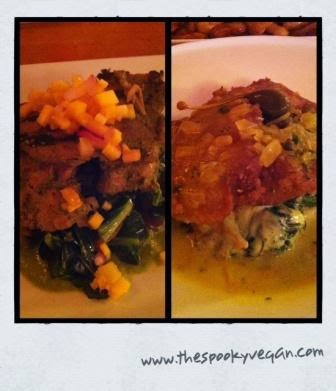 Candle 79's Caribbean Jerk Grilled Seitan and Seitan Piccata
(sorry for the dark pics...it was hard to get a good photo there!)

For entrées, we got the Caribbean Jerk Grilled Seitan and the Seitan Piccata. I loved both, but I preferred the Caribbean Jerk Grilled Seitan. I couldn’t resist ordering dessert, and I chose the cannoli! Cannoli used to be my favorite (I am an Italian girl, after all!), but I don’t think I’ve had one since going vegan! This definitely filled that gap! It was so decadent and delicious, though I could have done with less chocolate. We rolled out of there and waddled through Central Park in the twilight dusk. After giving our tummies some time to recover, we headed out later that night to check out Times Square. I was unimpressed, but hey, at least I did it!

Monday was our last day there, so we strolled down to Chelsea to go to Blossom for lunch. After waiting around we find out that they are closed for kitchen maintenance, so we go over a few blocks to Blossom Du Jour for lunch. I get the Little Italy sandwich and Mister Spooky gets the Midtown Melt sammie. The Midtown Melt was my fave! Sooooo good! 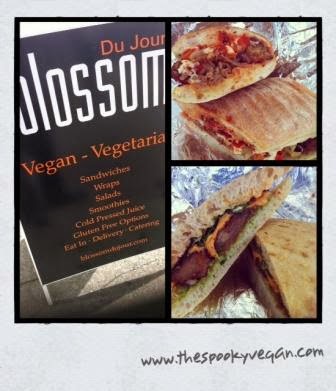 The Highline wasn’t too far away, so we go check that out and enjoy a lovely stroll through gardens above the city. We hop on the subway and head down to the Staten Island ferry, because you gotta see the Statue of Liberty in person once in your life, right? The Staten Island ferry is free (yippee, especially after dropping bills on fancy vegan eats) and takes you right by the Statue of Liberty. It was pretty neat seeing it in person! 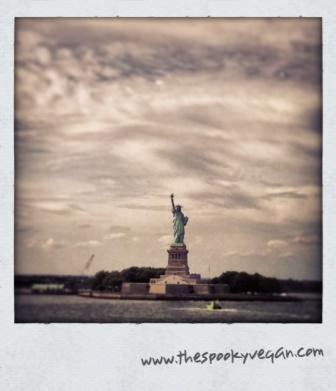 The Statue of Liberty

Back on Manhattan we walk around Battery Park a bit, then head back up to Blossom since they have re-opened for dinner. This is another vegan restaurant I never thought I would get to! We had Cashew Cream Ravioli and Cape Code Cakes for appetizers. We both really liked the ravioli. Mister Spooky proclaimed it his favorite vegan dish of the trip, though I gave the edge to Candle 79’s ravioli. For entrées, we ordered the Cauliflower Risotto (him) and Port Wine Seitan (her). I did not like the cauliflower risotto at all, but the port wine seitan was pretty good. Dessert was cheesecake and crème brulee! Blossom was delicious, but I think I prefer Candle 79. 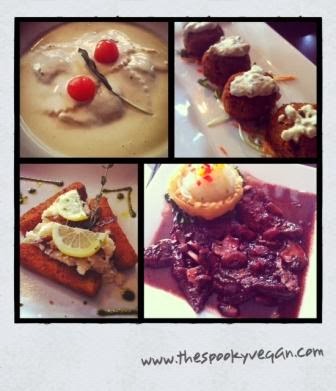 We met our friends at The Slaughtered Lamb, which is a bar after my own heart as it is an homage of American Werewolf in London, but didn’t stay long because of the stifling heat inside (ugh, turn on you’re A/C people). We headed back to our friend’s apartment and spent the rest of the evening hanging out on the rooftop overlooking the Financial District and toasting to the great city of New York. 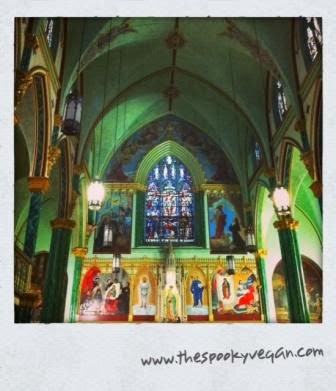 To be honest, I didn’t think I would like NYC at all, but I completely fell head over heels in love with it! The subway was a breeze (I recommend downloading an app like Embark or NYC Subway to navigate it), the food was amazing (and I barely scratched the surface of vegan eateries), the people were really friendly and it was a stunningly beautiful place! I cannot wait to go back!