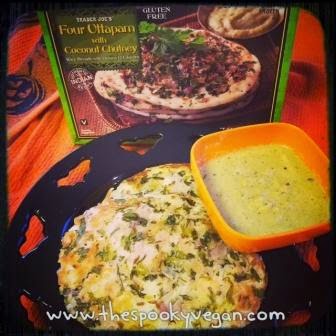 It always seems like I am finding new vegan items to try at Trader Joe's, and I recently discovered this Uttapam with Coconut Chutney in the frozen food aisle! I had never seen it before, so I had to try it. As luck would have it, I was feeling particularly lazy the other night, so I decided I would try this easy-to-make uttapam. By the way, before I picked this up I had no clue what uttapam was (I really need to eat more Indian food), but from the box I learned that the rounds pictured on the front are rice breads topped with onions and cilantro. It sounded like quite a tasty, light meal, especially with the coconut chutney!

I heated up the uttapam in a cast iron skillet until it was crispy on the bottom and thoroughly cooked through (you can also heat it in the microwave, but I wanted it a little bit crispy on the bottom). I ate it right away, and dipped it into the coconut chutney for extra deliciousness!

The uttapam was really good, and the rice bread kinda reminded me of latkes in their texture and consistency. The cilantro and onion were yummy as well, and the topping reminded me of a Middle Eastern-style flatbread topped with spinach and garlic that I used to buy all the time! Also, the coconut chutney was the perfect addition to the uttapam, I just wish there had been more of it! The box came with two packets of the chutney and four uttapam bread rounds, but I pretty much used up all the chutney on my first two bread rounds!

The uttapam was great as a light meal and could also be used as a quick snack. I believe it was around $4, though that is a total guesstimation as I don't remember the exact price. I would definitely buy this again!
Posted by Sarah E. Jahier at 7:30 AM