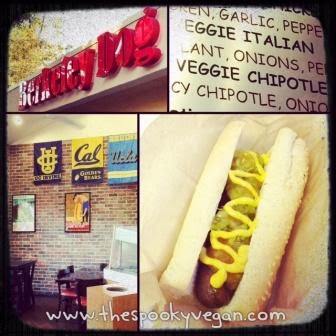 UPDATE: Unfortunately, this restaurant has closed.

Attention UCI and Orange County vegans! Berkeley Dog, located on the UCI campus near Trader Joe's and Veggie Grill, has two vegan sausage options! I'm not sure how long these have been available, but after visiting the location with some non-vegans a few weeks ago, I was ecstatic to see "veggie dogs" on the menu.


Their website lists them as vegan, however their in-store menu just says "veggie", so I double-checked with the cashier to find out if they were vegan, and while she didn't know, she went and got the product sheet with a full list of ingredients for me. Lo and behold, not only were their two veggie options vegan, but they were Field Roast sausages! Field Roast is pretty much the king of vegan sausages/hot dogs, so I was totes stoked.

The two vegan options they offer are the "Veggie Italian" and "Veggie Chipotle". I got the Veggie Chipotle to go and was pleased when they cooked the Field Roast sausage in a separate pan on their grill. Now, I didn't verify if their bun was vegan, so double-check if you go there. It was a plain white bun with sesame seeds on top, and a little too thick and "bready" for my tastes, so I ended up discarding most of it anyway. Since I got my dog to go, it was plain when I got it home (I guess I was supposed to add my own onions, even though it specifies them on the menu?), so I just loaded it with my own relish, hot sauce and mustard. Since it was Field Roast, of course it was tasty!

The plain dog and bun was around $4 (same price as the rest of their gourmet sausage options), and while I could have bought my own pack of Field Roast sausages for this price, it is still nice to see vegan options at otherwise meat-heavy establishments.

If you are in the area and don't feel like eating at Veggie Grill, Berkeley Dog is a solid choice, especially if you are dining with non-vegans.