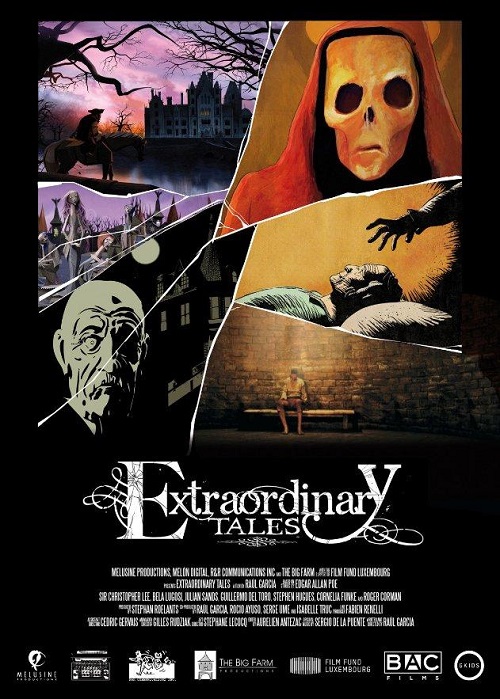 I haven't been posting as many "Watch Now on Netflix" articles as I would like and have a lot of (fairly) new Netflix titles to recommend to you that I need to catch up on (hopefully soon, maybe in one big post)! However, when I saw this animated tribute to Edgar Allan Poe's work, I knew I had to write something about it immediately. You see, I have been wanting and waiting to check out Extraordinary Tales for quite some time now, and was ecstatic when it was recently added to stream on Netflix Instant!

This animated horror anthology features horror greats like Bela Lugosi, Christopher Lee, Guillermo del Toro, Roger Corman, and Julian Sands narrating five Edgar Allan Poe tales and one wraparound story. Each animated short is narrated in a different style, with one having a stark graphic novel look, another one looking like a soft watercolor painting, another featuring bold colors in old comic book style, and so on.

Of course I adore Poe, so this was quite a treat to watch. The tales that are covered in the film are "The Fall of the House of Usher" (narrated by the late, great Christopher Lee), "The Tell-Tale Heart" (with archival recordings of Bela Lugosi reciting the tale), "The Pit and the Pendulum" (narrated by Guillermo del Toro), "The Facts in the Case of M. Valdemar" (narrated by Julian Sands), and "The Masque of the Red Death" (with Roger Corman as the voice of Prince Prospero).

My favorite segments were "The Tell-Tale Heart" and "The Pit and the Pendulum" - I loved how the animation style came together with the narration on both of these! They had very different visual styles, but both were striking. And the scratchy recording of Bela Lugosi's voice in "The Tell-Tale Heart" just fit so perfectly, even with the stark black and white style of the animation! And Guillermo del Toro totally nailed it with his narration of the prisoner in "The Pit and the Pendulum" - just heartrendingly beautiful!

The anthology wasn't perfect, but overall I enjoyed it and would recommend it to those looking for gorgeous words and visuals they can just bask in. I would definitely watch this again, and think it would be great to put on in the background while drawing or even cleaning the house (after watching it once, of course). It's calming and thrilling all at once, if that makes sense!

Extraordinary Tales is definitely a treat for Poe fans! Watch it now streaming on Netflix or purchase it via Amazon!