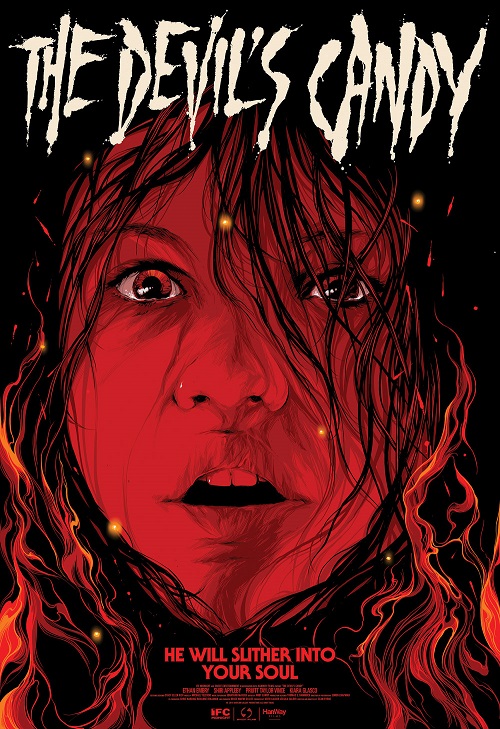 I was so excited to see that Netflix added The Devil's Candy to their instant streaming catalog! I had been looking forward to seeing it since early 2016 (where I had it as one of my most anticipated movies of 2016). Even though it technically had a 2015 release (probably at film festivals), it was really hard to track down, though I think it was available on Amazon at the beginning of 2017.

I really enjoyed writer/director Sean Byrne's last film The Loved Ones, so I couldn't wait to see The Devil's Candy. As soon as I saw it pop up on Netflix I dimmed the lights, lit a few candles, and snuggled up on the couch with a big bowl of popcorn to finally watch The Devil's Candy!

The story focuses on a rural Texas farmhouse that seems to be inhabited by an evil, satanic force. The previous owners died in the house and their grown-up but mentally disturbed son Ray (Pruitt Taylor Vince) has been forced to move out. He continues to hear voices telling him to do bad things, which he tries to drown out by playing loud, droning metal riffs. In the meantime, an artist named Jesse (Ethan Embry) and his metal-loving daughter Zooey (Kiara Glasco) and wife Astrid (Shiri Appleby) move into the rural farmhouse. However, the same satanic presence continues to lurk in the home and begins to affect Jesse's art, which becomes increasingly disturbing, as well as deteriorating his relationship with his wife and daughter. The evil forces also continue to affect the mentally disturbed Ray, as he begins to give in to the voices' demands and stalk the family inhabiting his old home.

I really liked that I cared about the characters right off the bat, and I loved seeing such a strong, positive relationship between a dad and his daughter. Ethan Embry did such a fantastic job as artist dad Jesse! He was sweet and caring and just so cute. I also loved his smart, adorable, metal-loving, and kick-ass daughter Zooey. Pruitt Taylor Vince was truly creepy but also oddly sympathetic as the disturbed Ray, proving again what a fantastic actor he is.

I also liked how this wasn't your typical possessed/demonic/satanic film. It has a slow build and is much more subtle at portraying the horror. It avoids the cliches and expected outcomes of stereotypical possession/satanic horror flicks, and I like that it did the unexpected and focused on the family's bond rather than the demonic bits. This might disappoint some people, but I liked the different approach, especially since the family was so likable.

The film also has some mesmerizing cinematography, and overall it is beautifully shot. It also has a heavy soundtrack that I dug a lot. It explores themes about family, passion versus madness, how far you would go to achieve your dreams or obtain success (i.e. selling your soul and selling out), and more. I was hooked from the first few scenes and was invested in what would become of Jesse, Jesse's family, and Ray.

If you haven't had a chance to check out The Devil's Candy, I highly recommend you do so on Netflix streaming!

If you don't have Netflix, you can also watch it on Amazon and the Blu-ray can be pre-ordered ahead of its September release!

If you have seen The Devil's Candy, let me know what you thought in the comments below!