Descend Into Darkness This Weekend at ScareLA 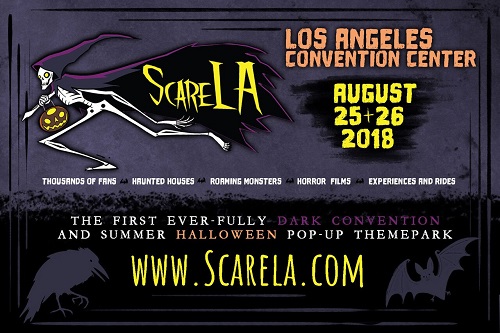 This weekend ScareLA returns with a brand new creative direction for their Halloween-in-summer convention as it reveals the first-ever fully dark immersive convention and pop-up theme park in Downtown Los Angeles, inviting attendees to "Descend Into Darkness."

The event will be held at the Los Angeles Convention Center Saturday, August 25th and Sunday, August 26th, and will feature a wide array of horror and Halloween vendors, haunts, rides, experiences, and more, promising an immersive and interactive Halloween experience as soon as you cross the threshold onto the show floor.

For more information on the event, read the official press release below:

LOS ANGELES, CA -- ScareLA, the original summer Halloween convention, announced a brand new creative direction and theme for its 2018 event. Set to thrill audiences this August 25 and 26, at the Los Angeles Convention Center, SoCal’s premier show will take place with the lights off. Revealing the world’s first summer Halloween pop-up theme park under the title "Descend Into Darkness," ScareLA continues to push the envelope of the horror genre and deliver on the ultimate fan experience.

The con's new format is an exciting departure into the world of themed entertainment and a first of its kind. Guests will explore the showfloor in a low lit environment immersed into the night of Halloween as soon as they cross the doorstep.

Established in 2012, ScareLA was the first fan convention dedicated to the Halloween season. The show has become known for its signature immersive and interactive format bringing together fans and famous from around the world to celebrate Halloween in the summer. This year ScareLA's Founder and Executive Producer, Lora Ivanova, is taking her vision even further in a groundbreaking move to intensify the show's experiential trademark.

"At ScareLA, we pride ourselves on truly pushing the boundaries of what a convention can and should be," said Ivanova. "After quickly becoming the largest event of its kind, we are now setting our sights on a new goal - delivering the ultimate scare fan experience. What better way to do that than by truly embracing what Halloween is all about - complete immersion, engagement and dark fun! We cannot wait to welcome fans to our new summer Halloween pop-up theme park, it truly will be an experience unlike any other."

As ScareLA prepares to celebrate its sixth anniversary, it promises to do so with thrills and chills for all ages - from full size haunts, experiences, and rides to original activations, panels and attendance from leaders in the haunt and horror world.

Use code "20ween" for 20% off tickets for a limited time - grab your tickets while you still can HERE!

Hope to scare ya there!
Posted by Sarah E. Jahier at 9:30 AM