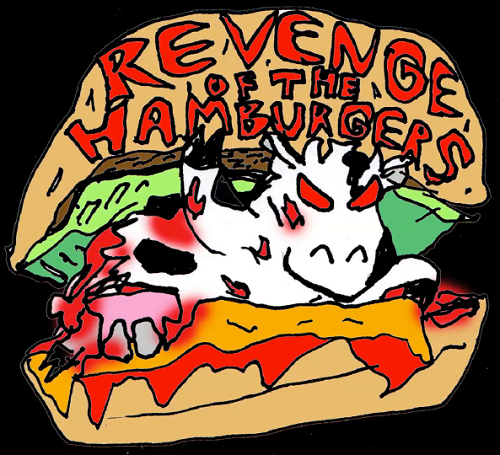 Synopsis: The movie stars Maddy, a ghost cow who leads zombie like animals in revolt from the factory farm and meat corporation that is responsible for their sufferings and deaths.  The film also follows Tanya and Alec who are opposite personality animal-lovers who are caught in the chaos. Other characters include the Farmer and the owner of the meat company. Through various perspectives one thing is for sure. "No one wants to be served up for dinner."

The film will be a combination of animation, stop-motion, and live-action and will be directed by Tom Zarzecki. If you decide to donate to Revenge of the Hamburgers, there are some neat perks you can receive, including special thanks in the credits, producer credit, opportunity to be an extra in the film, VIP packages, copies of storyboards, and more!

Every dollar helps fund this vegan horror-comedy, so take a moment to read more about this movie and donate if you are able to. You can find more information on the film via their IndieGoGo page!
Posted by Sarah E. Jahier at 11:00 AM