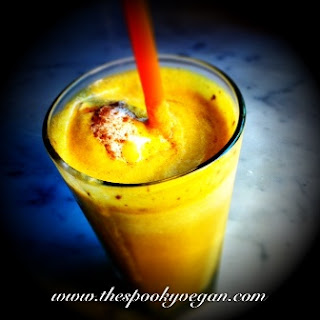 Octobers in Southern California are usually pretty warm...unfortunately temperatures still hover around 80 degrees Fahrenheit and we rarely get a cool, crisp autumn. If you are like me and still want to enjoy the warm flavors of the fall season while still staying cool, then try this vegan pumpkin pie shake recipe! It is like a pumpkin pie in milkshake form!

I adapted the recipe after looking at several pumpkin smoothie recipes online (namely this one by Feed Me I'm Cranky and this one by Happy Herbivore). I wanted a richer, thicker shake so I added some vanilla ice cream and this new autumn creation was born!

Throw everything in a blender and blend until smooth and creamy. If shake is too thick, add more non-dairy milk. If you like a bit more sweetness, try adding a teaspoon or so of pure maple syrup.

Pour into a tall glass and top with a scoop of vanilla ice cream and a sprinkle of cinnamon if desired. Drink and enjoy!

Recipe makes enough for two if you feel like sharing!
Posted by Sarah E. Jahier at 10:30 AM