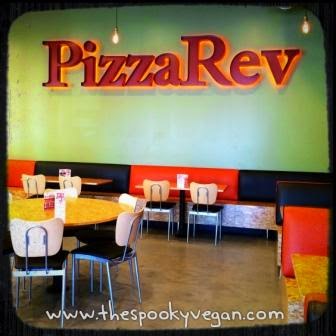 A fellow Orange County vegan clued me in on PizzaRev, a new pizza place that opened up near South Coast Plaza in Orange County. PizzaRev has other restaurants in SoCal (and are planning on expanding to other parts of the nation), but this is the first one I had ever heard of! They have a build-your-own pizza system, with a counter set-up much like Chipotle’s, where you tell your server what kind of crust, sauce, and toppings you want for your pizza. They are not a vegan restaurant, but they do offer vegan options!

Both of their crusts, the original and the gluten-free dough, are vegan! The gluten-free dough will run you an additional $2, though. The vegan sauces they offer are marinara, BBQ, or olive oil. And guess what?! They offer vegan cheese (I believe it's Daiya). The vegan cheese is $1 extra, but that’s not bad at all considering other places charge $3 for vegan cheese. As for toppings, they don’t have vegan meats, but do offer tons of veggies and other vegan options. Annnnnd they don’t charge by toppings, so feel free to pile on the veggies! 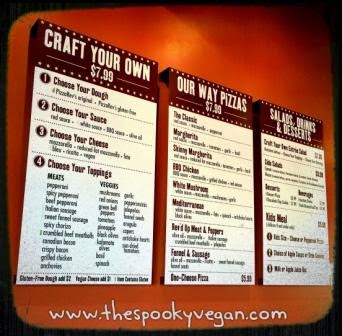 The menus - the first is the "Build Your Own" pizza menu,
the middle menu is "Our Way Pizzas" (didn't see any vegan
oneson this list, though), and the last one is the Salads,
Drinks and Dessert menu.

The assembly-line approach to their pizzas is pretty cool. I picked my dough, which comes in a personal-size, then my server went down the line asking what I wanted at each station (sauce, cheese, toppings). I told her I wanted a vegan pizza and she even changed gloves before handling any of the toppings without me having to ask her to do so! I got regular dough, marinara sauce, vegan cheese, pineapples, jalapenos, spinach and topped it with some Bob’s Red Hot Sauce. After choosing my toppings, into the oven it went. After about 10 minutes I had a piping hot pizza ready to be devoured! I loved the thin, crunchy crust and the rest of it was really tasty as well.

I only had a few minor complaints – They kinda skimped on the vegan cheese (though this could be because the crust is thin and would get soggy with too much). I would have liked to see a bit more than a drizzle of Daiya, though. Furthermore, I originally asked for arugula and was given spinach instead (they put it on after it came out of the oven so it wouldn't burn), but I actually didn't notice this until I looked at pics afterwards. Despite the lack of Daiya and the wrong greens, it still tasted yummy! However, the issue of more concern was that the server didn't seem to understand what “vegan” meant (I asked if all sauces were vegan, and she said yes, even though the white creamy sauce is obviously not vegan), but luckily I had checked out this section their site previously and knew what to order. Other than those minor issues, I had a great experience - the service was friendly (the manager even came over to greet me) and the pizza was delicious! 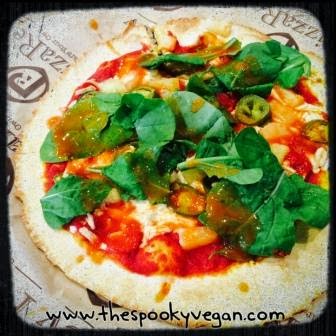 Here is my pizza creation!

My pizza came out to about $9, which isn't too bad. Their flat rate for pizzas is $7.99, but since I got vegan cheese it was a dollar extra. The pizzas are about 9 to 10 inches (personal pizza style), so I think the price is right.

They also serve beer and wine, so it would definitely be fun to get a group together to enjoy some pizzas and booze! They have a large seating area, a bar area, and even a patio area, which makes this location perfect for groups or families.

I will definitely be back!

For more info, visit PizzaRev’s site!
Posted by Sarah E. Jahier at 8:30 AM