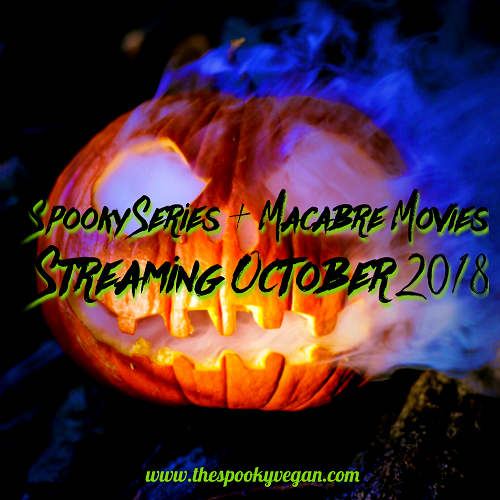 I am seriously stoked for a number of horror movies and series that are coming to different streaming platforms this October, and there are so many to choose from! You need a subscription for the streaming services below to watch these films or series, and I'm covering only the major ones - Netflix, Hulu, Shudder, and Amazon Prime. See what I'm most excited to check out from these streaming services this month below!

Creeped Out Season 1 (Netflix, October 4th, 2018) - This BBC anthology series premieres on US Netflix October 4th and tells kid-centered horror stories, much like a mix of Goosebumps and Black Mirror.

True Horror Season 1 (Shudder, October 4th, 2018) - Each episode of this Shudder-exclusive series tells a real horror story, based on true testimonies, brought to life through straight-to-camera documentary interviews and beautifully scripted drama. As you'll see below, I loooove these based-on-true-paranormal-events series, and I can't wait to check out this one.

Satan's Slaves (Shudder, October 4th, 2018) - This Indonesian film made its US-debut on Shudder October 4th and is about an evil that plagues a family after the death of their mother. The title alone grabbed my attention, but I'm also interested to check this out since it was the highest-grossing film of 2017 in Indonesia.

Into the Dark (Hulu, October 5th, 2018)- This is a holiday-themed anthology series premiering on Hulu October 5th with "The Body." Every month for a year, this series will feature an episode (which I believe will be feature-length) based on a holiday. "The Body" is about a hit-man transporting a body on Halloween night, but he attracts unwanted attention when everyone he encounters thinks he has a killer costume.

Malevolent (Netflix, October 5th, 2018)- This film premieres on Netflix October 5th and tells the tale of a brother and sister team that scam people into believing their homes are haunted and then help them get rid of ghosts...but then they discover a real haunted house.

Terrified (Shudder, October 11th, 2018) - Coming exclusively to Shudder on October 11th, Terrified is about paranormal events occurring in a seemingly ordinary suburban neighborhood in Buenos Aires and a doctor, her colleague, and an ex-cop who investigate this neighborhood nightmare. This looks plenty spooky from the terrifying (ha) trailer!

The Haunting of Hill House Season 1 (Netflix, October 12th, 2018) - I am eagerly looking forward to this series when it debuts on Netflix on October 12th! From the trailers it looks to be a departure from the Shirley Jackson novel, but I am in based on the visuals alone and for the fact that Mike Flanagan (Oculus, Gerald's Game, Hush) is at the helm. It looks like it will follow grown-up siblings who grew up in Hill House as they return to Hill House with their own families to face the ghosts of their past.

Apostle (Netflix, October 12th, 2018) - This film, premiering on Netflix on October 12th, looks to be different from director Gareth Evans' action-packed The Raid and The Raid 2 films, but the fact that it is a period piece in 1905, deals with creepy cults, has some insane imagery in the trailer, AND stars Dan Stevens has me extremely interested! The film is about a man who travels to a remote island in search of his missing sister after she is kidnapped by a murderous religious cult.

Light as a Feather Season 1 (Hulu, October 12th, 2018) - An innocent game of Light as a Feather, Stiff as a Board goes wrong when the five teen girls who played start dying off in the exact way that was predicted, forcing the survivors to figure out why they're being targeted. Ok, this looks like it may be a little cheesy and more for tweens, but it has potential to be a guilty pleasure! We'll see how it goes when it debuts on Hulu October 12th.

Slice (Amazon Prime, October 18th, 2018) - I have been looking forward to this odd little A24 horror release since I first heard about it last year, and it is finally getting a release on Amazon Prime October 18th! It's about a pizza place that is a portal to hell, a werewolf wanted for murder, and a ghost - and from the trailer it looks to be a pretty rad time and features some big names.

The Witch in the Window (Shudder, October 18th, 2018) - A separated father and his estranged twelve-year-old son head to Vermont to repair an old farmhouse - and, hopefully, their relationship - until a terrifying encounter leaves him doubting whether he can protect his son from an evil making its way into their heads, and hearts. A witch haunting a house, ummmm yes please!! This movie has gotten good buzz and I can't wait to check it out on Shudder October 18th.

Haunted Season 1 (Netflix, October 19th, 2018) - This is a dramatized version of people re-telling their supernatural, paranormal, or just plain weird experiences. This sounds a lot like Paranormal Survivor, and I absolutely love these kind of shows, so I can't wait to check out Haunted on Netflix October 19th.

Lore Season 2 (Amazon Prime, October 19th, 2018) - Who else loved Lore Season 1?! I really liked the mix of dramatizations and animation that told creepy historical stories, and I hear the second season is going to go even darker when it returns to Amazon Prime on October 19th. If you love the podcast

Summer of '84 (Shudder, October 25th, 2018) - This isn't exactly a Shudder-exclusive since it had a limited theatrical run and I believe is available to rent/buy on Blu-ray/DVD, but I am glad it is coming to Shudder on October 25th so I can finally watch it! This movie is about a group of boys in the '80s as they try to determine if their next-door neighbor, who is also a cop, is a serial killer.

The Chilling Adventures of Sabrina (Netflix, October 26th, 2018) - This is the one series I am anticipating the most this October! If you've seen the trailers, you know how absolutely stunning it looks! It is a revamped version of the Sabrina comments, with a much darker aesthetic. Witches, rituals, Satanic sacrifices, it looks like it is going to have it all!

What are you looking forward to watching this October on Netflix, Hulu, Shudder, or Amazon Prime?

Stay spooky, fiends!
Posted by Sarah E. Jahier at 6:30 AM