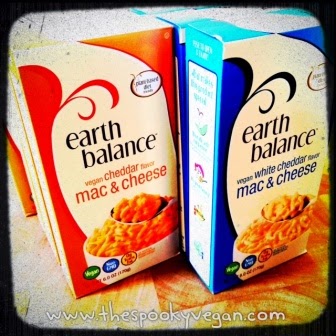 By now, most of you know that the wonderful Earth Balance has begun making vegan mac n cheese, sold in boxes just like the Kraft stuff most of us were familiar with in our pre-vegan days! I don’t know about you, but those boxes of mac n cheese hold so many nostalgic memories for me, so in my opinion I think it is fantastic that this comfort food has finally been veganized!

Earth Balance has made two flavors – the classic orange-colored cheddar flavor, plus a white cheddar flavor. Both flavors should be on store shelves this month (some are already hitting the shelves of local health food stores and Whole Foods), but I got impatient and just ordered mine online from the fine folks at Rabbit Food Grocery. 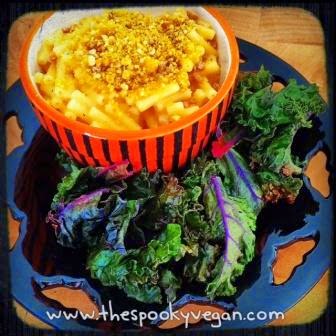 Earth Balance Cheddar Mac and Cheese topped with Parmela,
Bacony Bits and served with a side of purple kale

I tried the cheddar flavor first. Making it was exactly like making the Kraft kind – boil water, add the macaroni noodles, drain, then add in the (vegan) cheese powder, non-dairy milk (I used rice milk) and butter (of course I used Earth Balance)!  Mix it all up, let it sit to solidify for five minutes, season with salt and pepper and dig in! For extra cheesiness, I added some Parmela Vegan Parmesan crumbles and for some added smokiness I sprinkled some Wayfare Pig Out Bacony Bits on top!

After taking the first bite, I was amazed at how close it resembled the Kraft  mac n cheese from my pre-vegan days. At first, it was a little watery, but like I mentioned above if you let it sit in the pot after cooking it solidifies nicely. I also felt it had a slightly sweet taste, but I couldn't tell if that was just my tastebuds being weird or the flavor itself, though it seemed to go away after I seasoned it with salt, pepper and topped it with the Parmela and Bacony Bits. 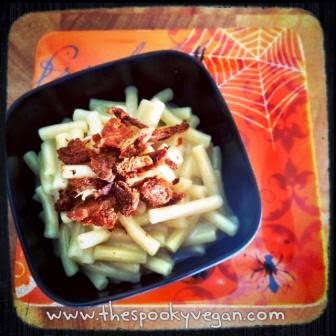 I also tried the white cheddar, and though I had assumed I wouldn't like it as much as the cheddar flavor, I was surprised to find I loved this flavor! It is prepared the exact same way the cheddar flavor is, and I seasoned it with salt, pepper and topped it with Louisville Vegan Jerky Company Bourbon Smoked Spicy Chipotle jerky. The flavor was pure cheesy goodness...I just couldn't stop eating it!

I was really pleased with how both these flavors tasted…sometimes you just need comfort foods from childhood and it is so awesome that a decent vegan option for mac n cheese in a box now exists! The only previous experience I had with vegan mac n cheese in a box didn't go as well – it was when I first went vegan 6+ years ago and tried some Chreese. I didn't care for it much and didn't taste anything like the Kraft mac n cheese! Earth Balance has come to the rescue and finally successfully veganized a childhood favorite! I feel like a broken record, but they have done it AGAIN! Kudos to Earth Balance and hurrah for vegan junk food!