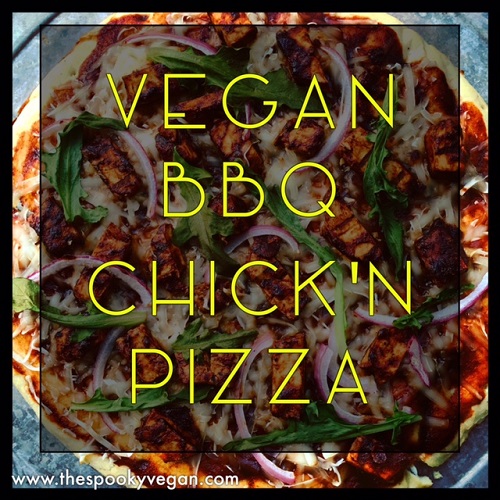 Pizza is my fave food group and I'll pretty much demolish any vegan pizza put in front of me. Recently I was craving a BBQ chick'n pizza, and realized I hadn't enjoyed one in quite some time! I drool over a zesty BBQ chick'n pizza, and once I whipped up this quick and easy recipe it made me question why I don't make this type of pizza more often!

This pizza is super simple, and with the help of of few pre-prepared ingredients it comes together in less than 20 minutes - that's prep and cooking time combined! This pizza doesn't require too many ingredients and is very tasty! It's so easy to throw together that I kinda feel silly sharing it here, but I thought, what the heck, everyone needs more vegan BBQ chick'n pizza in their life!

Here are the ingredients I used (feel free to tweak and add your own fave toppings):


Following the instructions on your dough, pre-heat the oven (usually to around 400 to 450 degrees Fahrenheit). Then roll out the dough and spread a few spoonfuls of BBQ sauce over it. Top that with the vegan mozzarella, the marinated and lightly sautéed Beyond Meat chick'n strips, and sliced onion. Set the arugula to the side for now.

Pop the pizza in the oven for the time specified on the instructions for the dough (usually about 10 to 12 minutes). In the last minute or two of cooking, pull the pizza out and top with a little or a lot of the arugula, depending on your preference. Stick it back in the oven for just one or two minutes, until the arugula leaves begin to wilt. 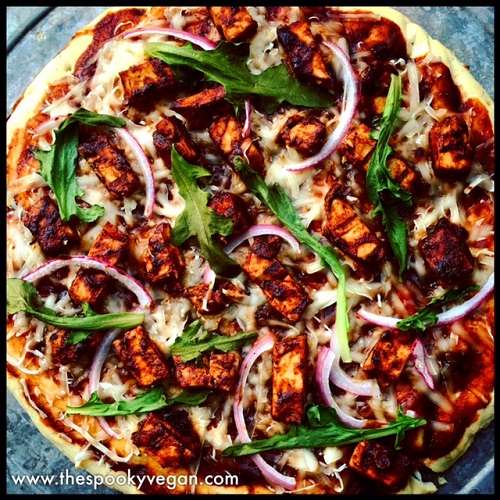 Take out of the oven, let cool a few minutes, then slice, devour, and enjoy!
Posted by Sarah E. Jahier at 11:00 AM