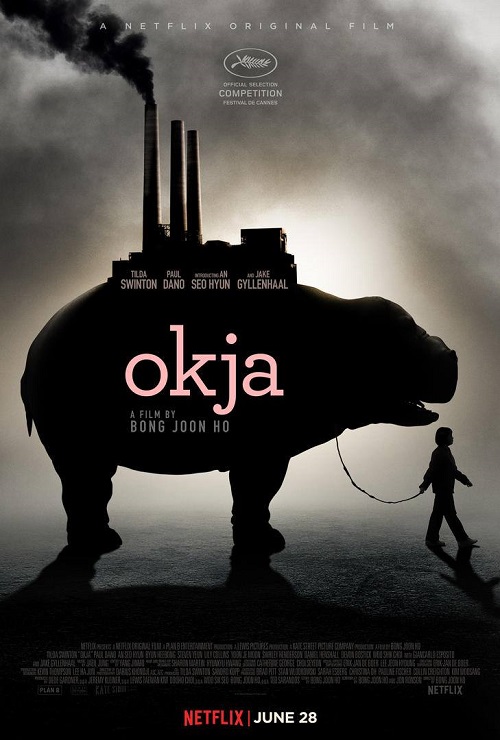 I finally mustered up the courage to watch the Netflix original film Okja - I heard it could be a very emotional film, so this past Friday night I curled up on the couch with some popcorn, my cat Havoc, and plenty of tissues. Now, I normally stick to recommending horror movies to watch, but since this film was so powerful (and contains some horrific elements) I think everyone should watch it. More on my thoughts on it below.

Synopsis: For 10 idyllic years at her home in the remote mountains of South Korea, young Mija has been caretaker and constant companion to Okja - a massive animal created by the Mirando Corporation for their "superpig" program. The Mirando Corporation takes Okja away from Mija and transports her to New York, where an image-obsessed and self-promoting CEO has big plans for Mija's dearest friend. With no particular plan but single-minded in intent, Mija sets out on a rescue mission.

Okja is a heartwarming and heartbreaking film that tackles timely issues like genetically modified food, corporate greed, the cruelty of the unsustainable animal agriculture business, why we draw the line at having compassion for some creatures and not others, and the beauty and power of friendship. It's part coming-of-age story, part heist film, part wacky comedy, part heartbreaking social commentary, and director Bong Joon Ho does a wonderful job of balancing and bringing together these varying tones of the film and creating a cohesive, engaging story.

I appreciated how the film shows that consumers are lied to with greenwashing campaigns (like labeling meat and other animal products as "natural" or "eco-friendly" when they are anything but those things) and how it clearly shows corporations are the real terrorists with these actions as well as hiding the horrors that take place in labs and slaughterhouses.

It also offers a scathing commentary on those who claim to love animals but still treat them like disposable commodities. It was both sad and satisfying to see a movie address the hypocrisy many people have with their relationships with animals (why they love some, but exploit others - check out Why We Love Dogs, Eat Pigs, and Wear Cows by Melanie Joy or Eating Animals by Jonathan Safran Foer if you would like to read more on the disconnect prevalent in our world).

It was heartbreaking to witness the way Okja and other superpigs were treated in the film, especially when this is how billions of farm animals are treated on a daily basis and how the scenes featuring slaughterhouses and factory farms are the norm. These scenes are harrowing, and I hope people make the connection that these horrors are what billions of smart, beautiful animals are subjected to everyday in animal agriculture.

However, I don't want you to think this is a heavy film that solely addresses the issues noted above - it is not a one-note film and is so varied and wonderful that anyone can enjoy it, whether or not they are left pondering their own relationship with animals after watching the film (though I do hope they are left with much to think about). It has some truly joyous moments that show the affection between Okja and Mija, not to mention some stunning and whimsical set pieces (i.e. the beautiful mountains where Okja and Mija grow up or the promo parade where Okja is revealed to the public).

The actors' performances themselves were quite enjoyable, from Tilda Swinton's hyper performance as the psychopathic head(s) of the Mirando Corporation, to Jake Gyllenhaal as a wacky and awful "animal lover" TV personality, to Paul Dano and Steven Yeun as members of the Animal Liberation Front (aka ALF, and yes, it is a real organization), to An Seo Hyun as the fierce and adorable Mija. And of course, there is Okja herself, so full of emotion, understanding, and intelligence, that you basically fall in love with her the first five minutes.

Okja deserves all the positive attention it is getting - not only is it a fully rounded film, but it makes its audience question the plight of the planet and how animal agriculture is heading us in the wrong direction and is not the answer to anything - not world hunger, not a more natural or more humane food model, not to a cleaner future. It is the opposite to all those things, and it must cease in order for the human race to survive.

You can watch Okja now on Netflix streaming.
Posted by Sarah E. Jahier at 9:00 AM