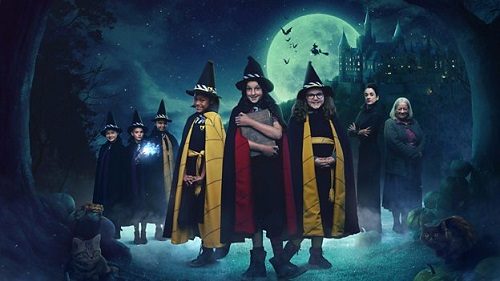 Netflix recently released the TV series The Worst Witch, based off the series of books (said to be the inspiration behind the Harry Potter series) by Jill Murphy first published in 1974 and most well-known for the 1986 made-for-TV film starring a young Fairuza Balk and featuring an unforgettable Halloween musical number by Tim Curry. There are various other film and TV adaptations, but I've only seen the 1986 version, which has a sweet, quirky, and cheesy charm.

The Worst Witch follows the well-intentioned but terribly clumsy Mildred Hubble (played by Bella Ramsey, best known as Lyanna Mormont in Game of Thrones) as she navigates her way through the magical Miss Cackle's Academy for Witches. Due to her bad luck, lack of experience in witchcraft, and poor spellwork, she is soon considered the worst student in the school. However, with the encouragement of the kind headmistress Miss Cackle and her new friends Maud Spellbody and Enid Nightshade to help her out, Mildred overcomes her hardships and even manages to save the school from certain disaster several times!

You can imagine how ecstatic I was last Friday when Netflix premiered the new Worst Witch series! I have been craving something new and fun, and this adorable, spellbinding series came just in time, and seemed especially fitting since Halloween goodies are popping up in stores. I binge-watched it last weekend and though it is a little corny and not the most polished production, I still had so much fun with it and gladly look forward to season 2!

The characters are all likable and the situations they get into will give you a good chuckle. Sure, the series is made for kids, but there is no reason spooky kids at heart won't enjoy it, too! I loved the camaraderie between the young witches, the quirky storylines, and the witchy fashions (seriously want Miss Hecate Hardbroom's wardrobe!).

If you are looking for some light entertainment, The Worst Witch is a sweet and spellbinding series I recommend checking out.

You can watch the series streaming on Netflix now!