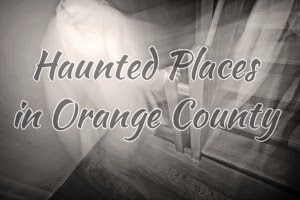 Since I've chosen ghosts and hauntings as the overarching theme for this year’s 31 Days of Halloween, I thought it would be fun to explore some supposedly haunted locations in Orange County (virtually of course!).

I have always been fascinated with haunted locations, whether they are the typical historic haunted houses or otherwise nondescript modern structures that have perhaps witnessed tragic events. Whether you believe in haunted places or not, there are just some locations that put your nerves on end, give you the shivers, and make you feel like something unseen is watching.

Even though Orange County isn't that old and doesn't have as many historical structures as other parts of the state, there are a surprising number of reportedly haunted locations, some that were even new to me! I haven’t listed them all, but here are a few I've handpicked for their accessibility in case you would like to conduct your own ghost investigation. Many historical societies and paranormal groups in Orange County also offer tours of these locations, especially in October, should you feel safer going in a group.

Please read on, but visit these locations at your own risk… 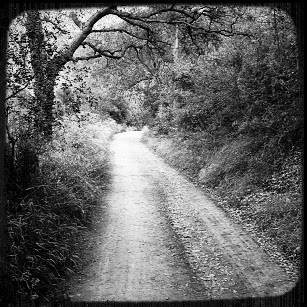 Black Star Canyon in the Santa Ana foothills – Out of all the locations listed here, this one place freaks me out the most. This isolated canyon gets eerie after nightfall, with reports of strange occurrences and unfriendly locals giving this canyon hiking trail a notorious reputation. The legends surrounding this place include an Indian massacre, human sacrifice in Satanic rituals, mysterious “Lady in White” sightings, and more. Should you find yourself up the canyon after nightfall, you may experience disembodied screams, shadowy shapes and an overall uneasy feeling of someone (or something) watching you. And if the spirits don't bother you enough, you will also need to keep an eye out for the locals up there, who react with hostility towards outsiders. Orange County Ghosts and Legends Tours takes groups up the canyon so you don’t have to experience the foreboding atmosphere alone. 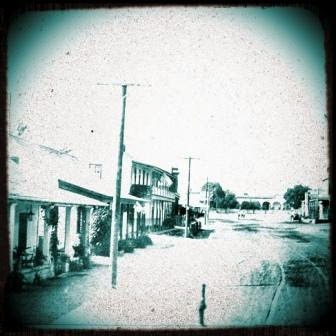 El Adobe Restaurant in San Juan Capistrano - Located in one of the oldest buildings in Orange County, El Adobe was built as a home in 1797, then was used as the town’s courthouse and jail starting in 1812, and eventually becoming the restaurant it is today. El Adobe Restaurant is said to be haunted by the spirit of a headless monk, who may just greet you at the front of the restaurant and has been known to hang around the wine cellar (which was once the jail). You can try to meet this spirit during the month of October, as the restaurant usually hosts a Halloween-themed dinner in the ghost’s honor. 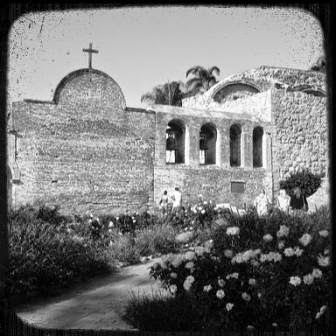 Mission San Juan Capistrano – San Juan Capistrano has more than one ghost, and its mission is home to several spirits, including a faceless monk, a Native American girl, a decapitated soldier who keeps watch over the grounds, and a “Lady in White”, similar to the one reportedly seen in Black Star Canyon. Strange occurrences experienced by visitors to the mission include the mission bells ringing at odd hours, ectoplasmic mist and orbs, shadowy figures in the cemetery, and apparitions of the ghosts themselves. 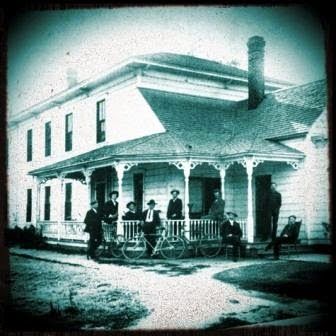 Old Towne Orange – Dating back to the 1864, Orange is one of the oldest Orange County cities, and the square-mile area surrounding the original plaza called Old Towne Orange Historic District still contains many of the original structures built after the city’s incorporation in 1888.Orange and its plaza is so pleasant during the day, that you may be surprised to learn that it comes with some macabre history and there are several ghosts that are said to haunt the area. HauntedOC hosts many ghost tours of Orange, showing guests the haunted hot spots. 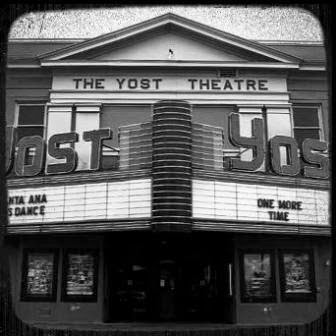 Yost Theatre in Santa Ana – The Yost Theatre is said to be one of the most haunted locations in Orange County and was even featured on the show Ghost Adventures. The Yost’s history dates back to the early 1900’s, and it has served as a vaudeville hall, concert venue, movie theater, church and the basement was even used as a jail. There are many spirits said to haunt the theater, which now hosts concerts, and guests have reported feeling sick, strange cold spots, and overall uneasiness. 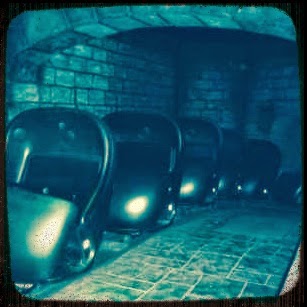 Doombuggies in the Haunted Mansion
[source]

Disneyland - Yup, even the "Happiest Place on Earth" may have some ghosts, and not just the fun ones in the Haunted Mansion attraction. Several sinister experiences have been reported by guests in several parts of the park, including a weeping child at the end of the Haunted Mansion ride and a ghostly woman on the Matterhorn ride. Many believe that the spirits are either those who have died on the property or those whose ashes have been scattered by their bereaved families. Some even say that Walt Disney himself keeps watch over the park near his old apartment over the fire station on Main Street USA. 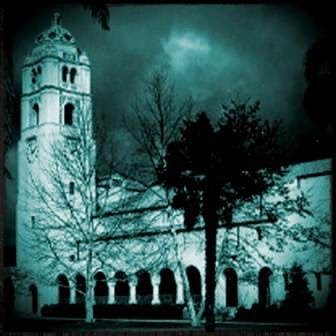 Downtown Fullerton – Another city with a haunted reputation is Fullerton, specifically the historic downtown district. The city's haunted locales include the Plummer Auditorium, where sightings of an angry woman spirit have been reported, the Fox Theater, where a weeping woman apparition has been seen/heard, and Villa del Sol (formerly Hotel California), where a local police officer claims to have witnessed a ghost at the bar and others have reported strange noises and occurrences. Haunted Fullerton Walking Tours gives tours of these haunted locations (and more) every October.


Have you explored any of these haunted locations in Orange County?

Do you have any other haunted or creepy places in Orange County to add to this list?
Posted by Sarah E. Jahier at 7:00 AM