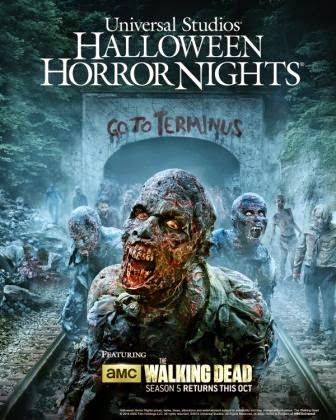 I got to attend my first EVER Halloween Horror Nights at Universal Studios Hollywood this past Saturday! I can't believe I had never attended before, and my first time was made even more special by a very generous friend who spoiled me with VIP tickets! I wanted to share a bit of my experience and let you know what I thought of it all.

Before I talk you through the evening I had, I want to mention that in an effort to soak everything in I barely took any pictures, which is odd for someone like me who is always snapping away! Mister Spooky, who attended as well, was kind enough to lend me some of his photos, though some are a bit blurry due to all the action and low lighting. With that said, let me talk you through our eerie evening! 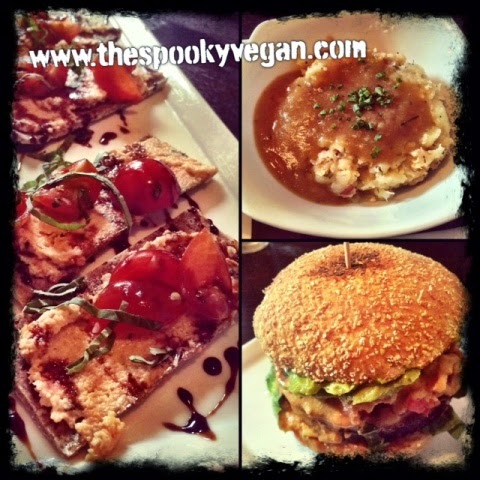 We started the night by having an early dinner at Sun Café (review of their previous location), which is located just down the hill from Universal Studios. Universal is pretty sparse on vegan dining options (see my previous report on vegan dining options at Universal), so Sun Café is the closest vegan restaurant and I highly recommend going there if you go to Universal Studios. After an early dinner, we headed up to Universal at about 5:30 pm. 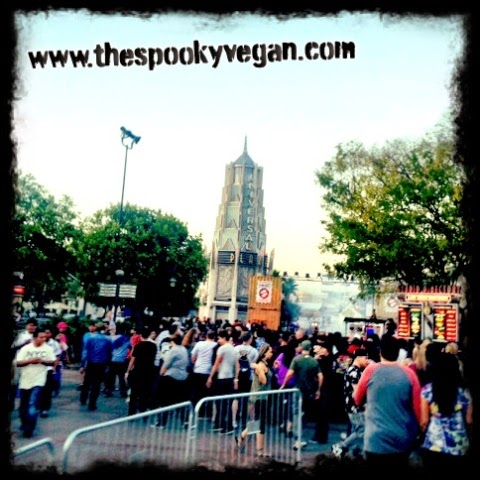 The park gets insanely busy for Halloween Horror Nights, so getting there early is key. With VIP tickets, valet parking was included, so we drove to the lot closest to the park entrance that is marked “valet”. There aren't any “VIP” parking signs, so if you do VIP just ask the attendants where to go and follow signs for the valet.

Once parked, we walked a short distance to the park entrance. VIP has its own entrances, so we headed for those and went through the metal detector security check and headed to the VIP will call, where they gave us our badges explained to us when our meal time and group tour was at the VIP lounge. VIP tickets come with a free buffet at a VIP-only lounge as well as a private guide to three of the most popular mazes and Terror Tram, as well as unlimited front-of-line passes. 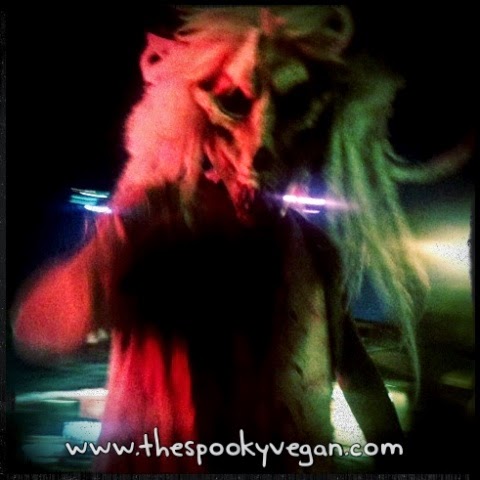 Creature from "Skullz", a scare zone in the lower lot - the
scare actors were on stilts and wearing these crazy skulls...and
would run after people on stilts! It was awesome!

After getting our badges, we were escorted to the front of the “opening ceremonies”, past all the general admission peeps, so we had front row seats of The Purge freaks! It was pretty awesome when they took the barricades down and dudes and ladies dressed in creepy masks came at you with chainsaws, knives, and other weapons! 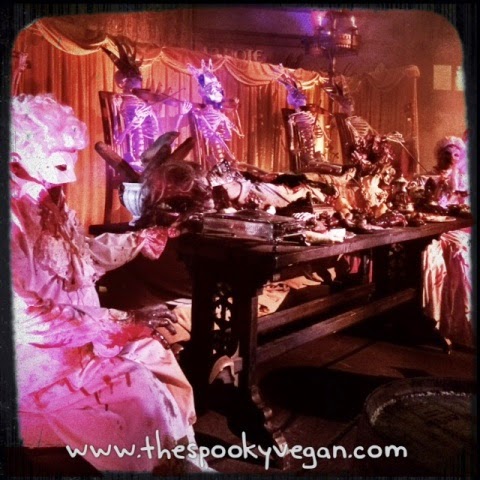 A gruesome tableau at the Mask-a-Raid scare
zone, complete with cannibal courtesans!

Our VIP lounge entry time wasn't until 8:30, so we had plenty of time to head to the lower lot and hit up the Clowns and American Werewolf in London mazes first! To get there, we walked past the Skullz scare zone, where actors on stilts were wearing these awesome animal skulls! Then we hit the VIP lines for the mazes. VIP gets you unlimited front-of-line, so we had no wait at all to enter the mazes. They did a bang-up job with American Werewolf…there were huge wolves popping out at you, awesome transformations, and cool sets! My favorite scene was having to walk through a theater filled with bloodied up people and creatures…but you didn't know which ones were fake and which ones would jump out at you! 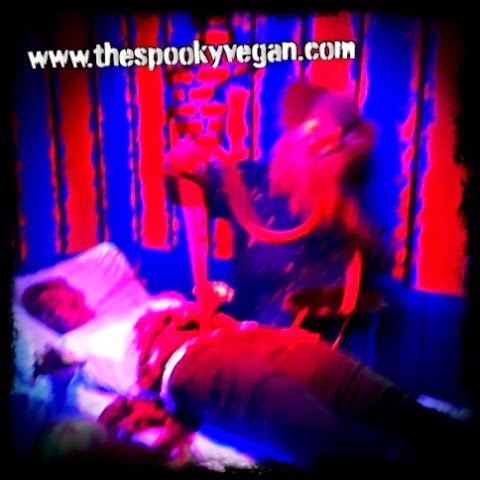 Clown in action gutting some poor guest who just wanted the
ice cream he was promised!

Next we did the Clowns maze, which was a lot of fun! It was in vividly bright 3-D, so you put on glasses before entering a neon-colored world that literally popped out at you! They also pumped some crazy smells in there, from cotton candy and popcorn to mint to puke smells! It was gross in the best way possible! And the clowns themselves were pretty gnarly as well! 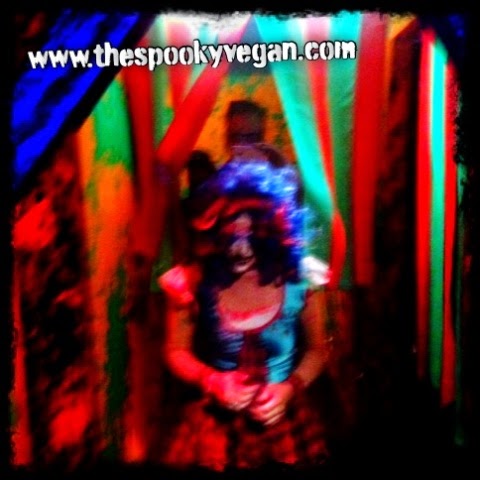 This lady clown that jumps out of a mirror in Clowns was my favorite!

Besides those two mazes, the lower lot also had The Walking Dead maze, AVP: Alien vs. Predator maze, and the Dusk Till Dawn maze, but we didn't do those initially since we would be doing those later in our VIP group, so we rode the escalators back up to the upper lot. We still had some time to kill, so we went on The Simpsons’ ride (it was my first time and it was so fun!), then did a few scare zones (Mask-a-Raid and Dark Christmas, both amazing) and did the Dracula: Untold and Face/Off mazes (which were ok). 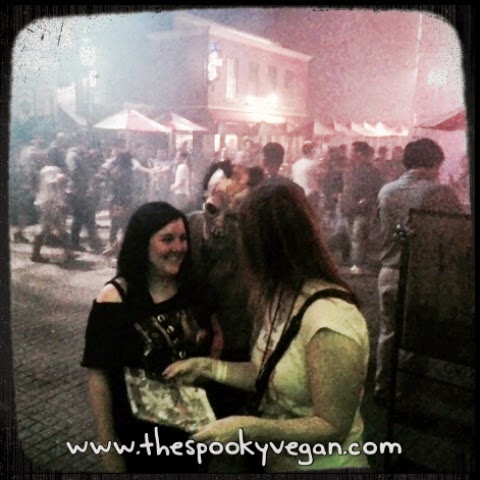 A very helpful ghoul trying to give me and my friend directions.
What a friendly fellow!

By that time it was around 8:20, so we made our way to the VIP lounge, where we checked in, were assigned a tour group, and got to sample the buffet and rest for a bit. As I mentioned earlier, Universal doesn't have a lot of vegan options. The vegan options at the buffet included some veggies (asparagus and Brussels sprouts), edamame and watermelon salad, pita and hummus (though the hummus was barely edible), olives, and probably some salad in there somewhere. There were a few other “vegetarian plates”, but I didn't try those as they appeared to have eggs or cheese in them. So, like I mentioned earlier, Sun Café is an excellent choice if you want to grab dinner first! They also had lots of water, sodas, and beer or wine for those 21 and over (with a two drink max per VIP guest). 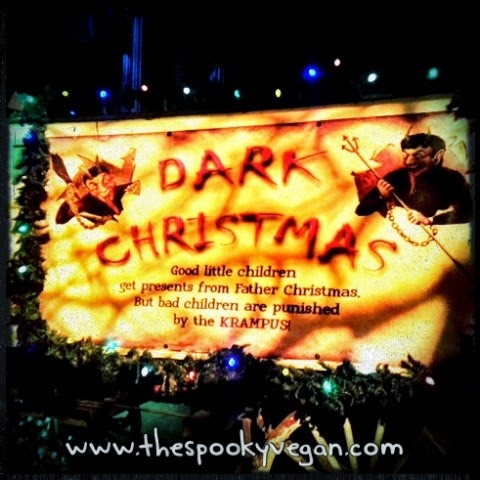 Dark Christmas scare zone was so cool...filled with Krampus, creepy
elves, evil Santas and other evil creatures from the North Pole!

The VIP lounge itself was nice, with lots of tables inside and outside, though I wish they had more than one bathroom stall! After eating and lounging for a bit, we lined up with our tour group (we were called “Wormfood”) and boarded a trolley to hit the three major mazes down in the lower lot. It sure was nice to not have to walk to these! We did From Dusk Till Dawn, The Walking Dead, and AVP: Alien vs. Predator. I just finished watching the From Dusk Till Dawn series on Netflix, so that maze was really fun for me! I especially loved that they had dudes playing Seth and Richie, the two main characters in the film/show, heckling guests outside the maze! For me, The Walking Dead maze was just okay…I guess I was expecting a bit more, or for it to be a bit longer. It wasn't very memorable. My favorite maze of the night was the AVP maze! They did such a great job with the sets and the scares! The props in that maze were really impressive and more than a little frightening! The ending was especially impressive! 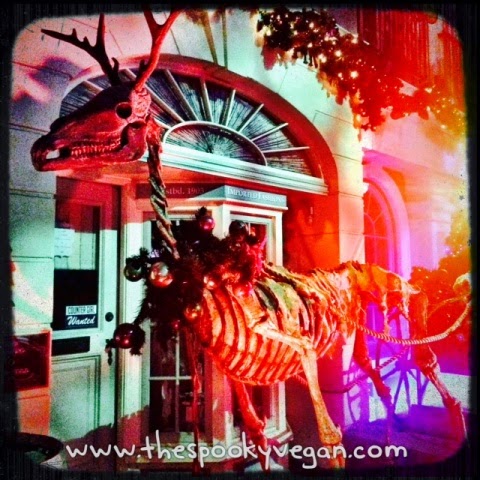 Our VIP tickets allowed us front of line, so we had no wait on The Walking Dead or Dusk Till Dawn maze, and only had to wait a few minutes for the AVP maze. The wait times for general admission were insane and the lines were soooooo long! AVP had a crazy wait time of over 2 hours (I think it was 150 minutes) and Walking Dead and Dusk Till Dawn each had at least an hour wait. I cannot imagine waiting in those lines! With VIP, we did all three within an hour or so. 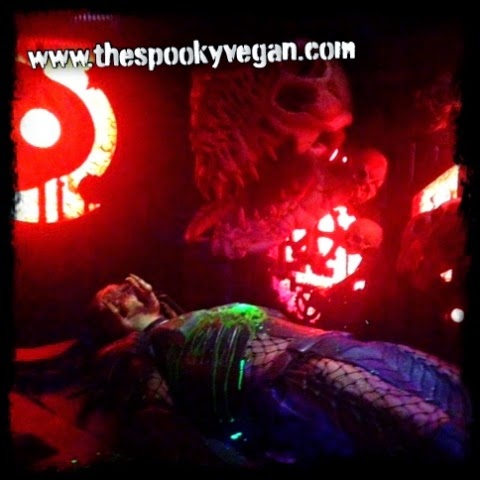 Oozing Predator in the AVP maze!

After hitting the mazes, we were dropped off at the Terror Tram and had to battle our way through zombies (and other guests) through the backlot and through the sets of Psycho and War of the Worlds. This would have been really cool, but it was just too crowded for the zombies to make any real impact. It was pretty awesome to walk by the Psycho house, though! 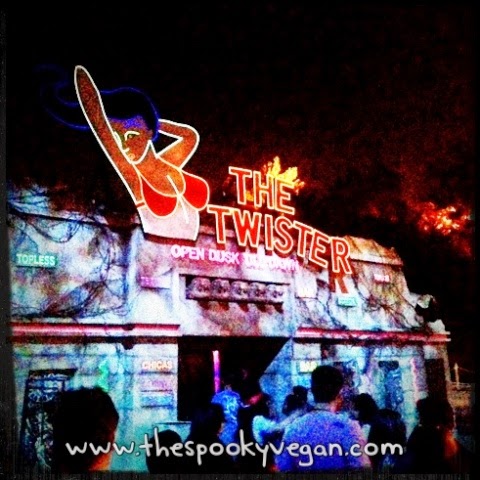 We hopped back on our VIP trolley, which took us back to the upper lot. From there, we decided to do our favorite mazes again! We went back down to the lower lot, did American Werewolf and Clowns again, took a break, then walked all the way to the backlot to do AVP and From Dusk Till Dawn again. The walk to that backlot where AVP, The Walking Dead and From Dusk Till Dawn were located was brutal! We previously had a trolley take us down there (cuz of the VIP passes), and didn't realize just how long of a walk it was! The area they put it in was really cool, and they made the sets look post-apocalyptic and filled the area with walkers you had to get through. After that it was nearing 2am, so we started to make our way out of the park, stopping to look at the merch in shops (Mister Spooky bought me the cutest Bates Motel pin!) and going back through a few scare zones.

Our first time at Universal’s Halloween Horror Nights was a great success. We had a lot of fun and I loved how amazing everything looked, from the high production values of the mazes to the excellent performances of the scare actors to the creativity that was involved on all levels! Universal is certainly the cream of the crop when it comes to Halloween mazes!

Check out a trailer for the event: