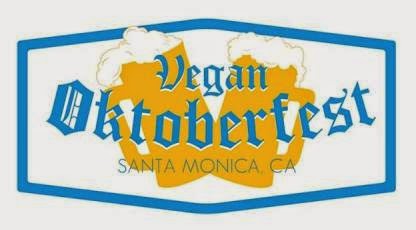 This past Saturday I attended the first ever Vegan Oktoberfest, held right on the beach in Santa Monica, California. Oktoberfest is such a quintessential October celebration, I was so, so excited that we finally had an all-vegan option for this celebration of drink and food! I had grabbed early-bird VIP tickets (cost: $50 each, though after the early bird sale they went up to $65 each) pretty much the day they announced the event many months back, so I had been eagerly anticipating attending this vegan event. 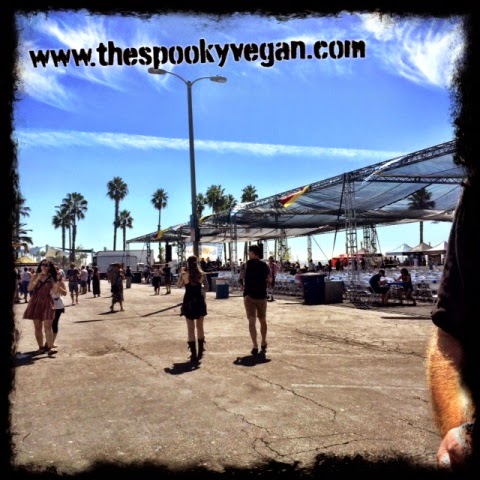 This was around noon when we first got there...I wish I had an
"after" picture to show what it looked like later!

Of course, a Southern Californian heat wave just had to occur on the weekend of the event, so that was a major bummer. It was in the high 90s, even right on the beach. That also meant that droves turned out for a beach day, making parking at the event a nightmare. With VIP tickets, I had early entry and showed up early, but the lot the event organizers said there would be parking in was already full (half of it taken up by the event itself), so we wasted a good 1/2 hour - 45 minutes driving around looking for alternate parking. We finally found a lot, but we could only park there for 4 hours, definitely putting a damper on the event before we even got there. Event organizers (this goes for all events, not just this one) - PLEASE figure out the parking situation and let your patrons know ahead of time. We would have arrived a lot earlier if we knew parking was going to be such a pain in the ass. 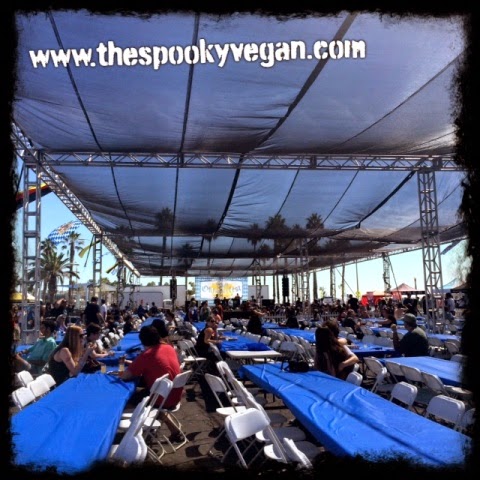 Lots and lots of tables, but these filled up ridiculously fast! I also
wish the canopy made it shadier instead of just providing
light cover from the awful heat.

We finally arrived at the event, already annoyed. We got there a little after noon, which was the VIP entry time. There was no line, and we got in really fast after showing our IDs, getting our tickets scanned and getting our VIP wristbands. We picked up our mini beer steins (about 5 oz. size, similar to Vegan Beer Fest's beer glasses, though these were plastic) and were good to go! At this point, the lines for everything were pretty short, so I made a beeline for Sage Vegan Bistro and got their pretzels ($7 each), with some maple and jalapeno dipping sauces. YUM! I knew the food lines would be atrocious later, so while Mister Spooky went and got us beer, I hit up Southern Fried Vegan and picked up a beer brat with with kraut in a pretzel bun, which was $12 with a bag of chips (unfortunately, their Deep Fried Cheez Steaks weren't ready yet, so I didn't get to try those, dammit). I also tried The Grilled Cheese Truck's special vegan option, which my friend bought, so I don't know the price. It was some kind of grilled cheese with sauerkraut and sausage (sorry, don't remember the name!). The same friend also got Sage's fish and chips, which I tried as well. I loved the pretzels, beer brat and grilled cheese sandwich, but though the texture of the fish was (scarily) spot-on, I didn't care for the flavor too much. The "chips" (aka French fries) were perfect, though! 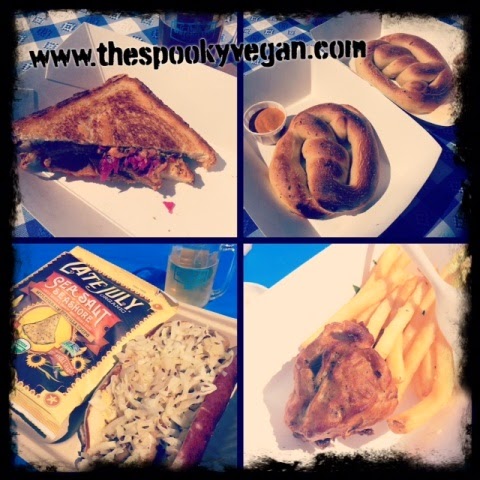 After all that food and multiple brews, I needed something sweet, so I headed over to Life is Sweet Bakeshop for their three beer cupcakes (all three for $10!) and traditional apple strudel ($4.50). The three flavors of the cupcakes were Pumpkin Spice, German Chocolate, and Lemon Wheat, and they were all made with beer from several breweries at the fest! They were the highlight of the festival for me - so light, fluffy and delicious!! The icing was divine and the flavor was out-of-this-world. As you probably know, I am partial to all things pumpkin, so I assumed that would be my favorite cupcake. However, after sampling all three I can't pick a clear favorite because they were all so dang amazing! I also tried the apple strudel from Life is Sweet. It was made the traditional way, with raisins, but you could also get it without the raisins if you preferred. I got it traditional style and loved every bite! 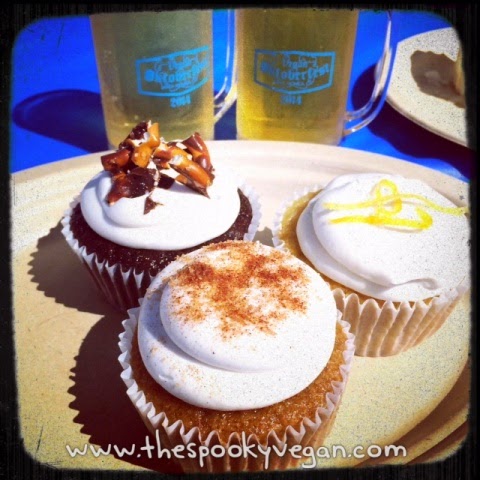 Beer cupcakes from Life is Sweet!

I also got to try KindKreme's vegan ice cream for the first time. I got their Cookies and Cream flavor and it was a welcome respite from the heat! I thought the consistency was a bit grainy, and the aftertaste was funky, but overall it was okay. I also tried their berry flavor, and I thought that tasted way better than the Cookies and Cream one I got. One scoop ran me $4.38 (yes, I remember the stupid .38 because I had to dig through change to find it...can't they just make it $4 as advertised??). 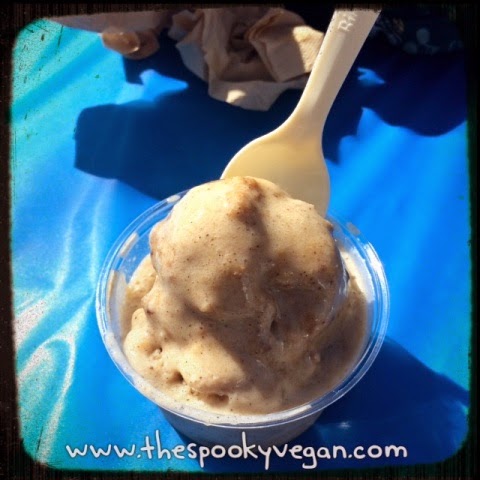 I was happy to see that Nary Dairy was on hand, and got several samples of their delicious nut-based vegan cheese. I loved those guys, they were so friendly and sweet! They and the people from Life is Sweet definitely had the nicest people working their booth! I think their cheeses are my new favorite (sorry, Parmela!), and I left the fest with three of their flavors. They were definitely another food highlight from Oktoberfest! 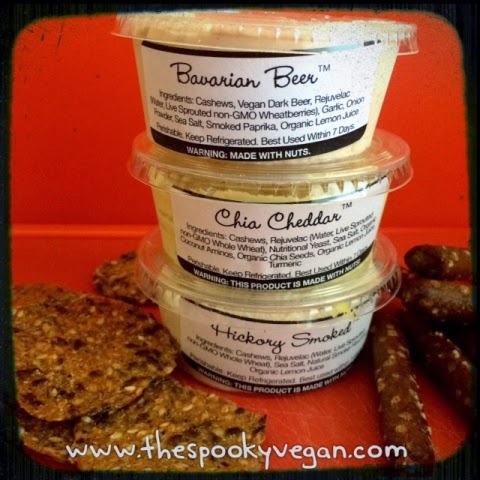 Picked up three Nary Dairy cheeses - their special Bavarian Beer flavor,
Chia Cheddar and Hickory Smoked! All so delicious!

Favorite brews included Einstok's Icelandic White Ale and Four Son's Vanilla Bean brew, with Einstok being my clear favorite! I didn't get to try many other brews, as I was the designated driver for the event. Definitely gonna seek out some Einstok now, though! Great beer!

So, after getting all the food I could and drinking as many brews possible in an hour, the general admission people started to be let in and that's when it clearly got clusterfucked. It got over-crowded really fast, and we had to leave at 3:30 anyway because the lot where we parked had a 4 hour maximum. It was probably for the best that we left early, because it got so overcrowded you could barely walk. Plus, you couldn't really talk to anyone you ran into because the music was so freaking loud. Seriously, I don't need to hear "The Chicken Dance" for the 1,000th time at full blast, thanks. I go to concerts all the time, but for a festival the music was just too loud and annoying. And when it got overcrowded, you couldn't even sit down...the special VIP section was always full with no place to sit and the regular area was full as well. I really appreciate they had actual places to sit, but the VIP area was tiny and needed to be bigger to accommodate everyone who bought a ticket. 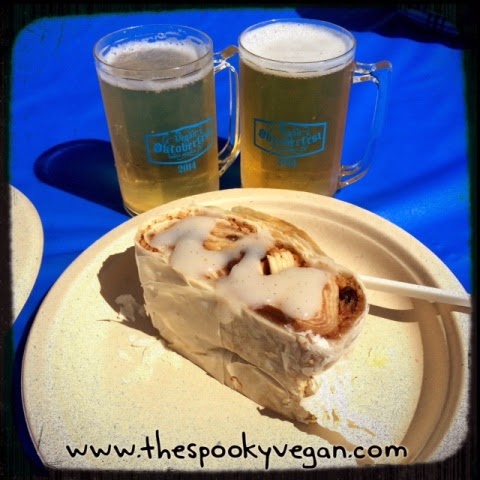 Don't get me wrong, I really appreciate that there is a Vegan Oktoberfest and I am lucky to have such an event in my area, however, I hope they make improvements if they ever have this again, because there was some serious issues that need to be addressed and I am not sure if I would ever attend this event again. You'll find my pros and cons below.


I feel like such a grumpy vegan ragging on this event, but I honestly didn't have that great of a time. I felt like they could have planned the event a lot better and overall was let-down and disappointed. I know this is their first year, so I have to give them a bit of slack due to that, but they need to make serious improvements in coming years. I love that a vegan event completely sold out, but if it's poorly planned and ill-executed, people won't be back next year.

I had really hoped Oktoberfest would be a fun kick-off to my October, but it was more disappointing than anything else.