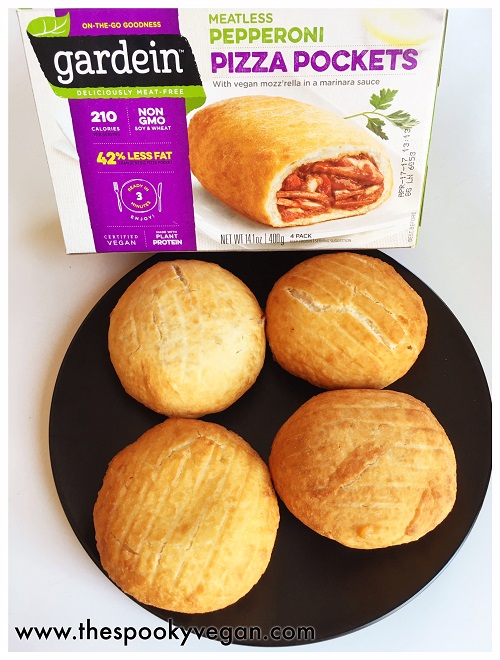 Helloooooo tasty convenience...these new Meatless Pepperoni Pizza Pockets from the lovely folks at Gardein hit stores in the last few months. I tried them at Expo West in March, and had picked up a box in a grocery store soon after that, but somehow these Pizza Pockets got buried in my freezer (behind the wall of other Gardein products, haha). I chanced upon them in the depths of my freezer a few days ago and it was quite a nice surprise, especially since it was one of those days where I was looking for something quick and easy to eat.

These beauties are shaped like buns, about 2 inches in diameter, and are stuffed full of yummy goodness, including pepperoni and mozzarella. Like all other Gardein products, they are vegan and contain non-GMO ingredients. I was curious to try them, since they seem so similar to Tofurky's Pepperoni Pizza Pockets that came out a few years ago (my review) as well as Gardein's own Pocket Meals that I had tried last year (my review). I enjoy most vegan foods that are fast, convenient, delicious, and come encased in a bun, so I hoped to add these Pizza Pockets to my arsenal of go-to on-the-go vegan products! 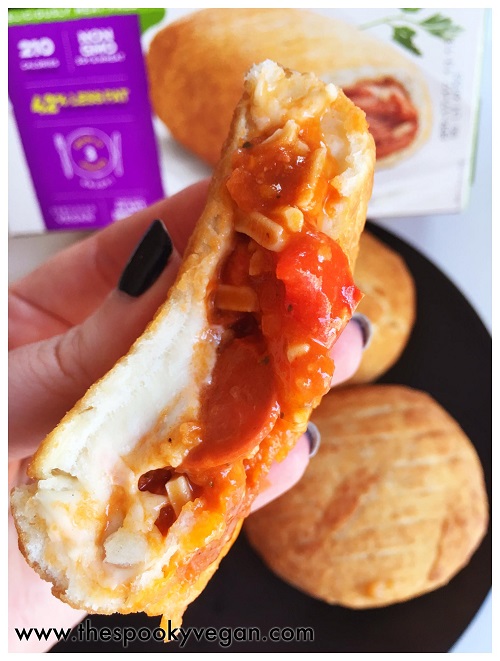 I cooked mine in the microwave and then in the toaster oven as recommended by the directions, and they came out beautifully browned and made my whole kitchen smell like pizza...so, I was pretty much drooling before I even took a bite! Instead of stuffing them all in my mouth like I wanted, I actually cut one in half and found it to be rather messy and gooey, so I used a fork and knife to eat the Pizza Pocket.

I liked the cheese, but the tomato sauce was just kinda "meh" to me and I felt it could have used more oregano or basil to pep it up a bit. I ended up dousing the other half of the Pizza Pocket with Just Ranch by Hampton Creek, and that jazzed things up a bit.

I ate about two pizza pockets (each package comes with four), since they aren't exactly the healthiest things (not that we are eating for health here, though!). They aren't really filling, so I think I could have easily eaten four if I wasn't paying attention! I've included a photo of the nutritional panel in case you care about that kind of stuff. 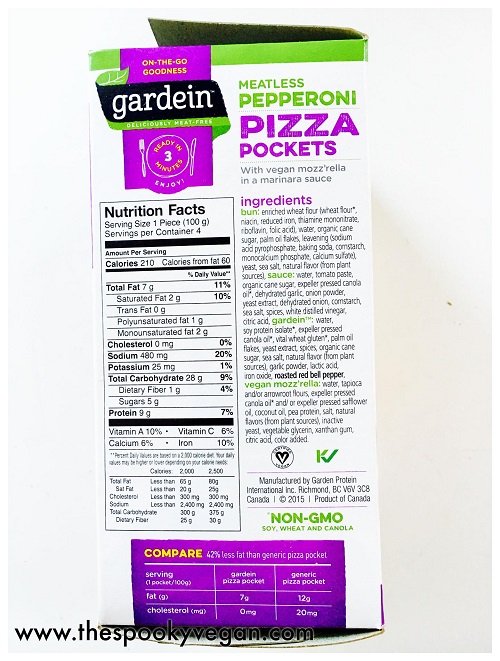 The verdict: I liked how quick and easy they were to prepare, but I think they are slightly too messy to take on the go. They are better for a quick meal or snack when you don't have much time to spare. They weren't my favorite, but I would probably pick them up again due to how convenient is it to make them.

These pizza pockets can be found in the freezer section of grocery stores and run between $4 - $6.

For more info and where these are sold near you, visit Gardein's website!
Posted by Sarah E. Jahier at 8:00 AM