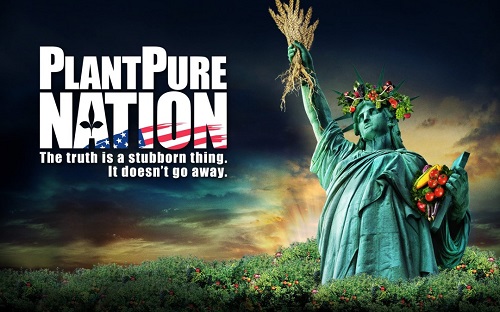 PlantPure Nation just hit Netflix streaming, and it is a revolutionary look at the unsustainable U.S. healthcare system and the one simple solution that has been buried time and time again by the U.S. government and big agribusiness. The documentary examines the research behind how a whole foods, plant-based diet could reverse/cure many diseases (and why no one is telling the general public about this), our bonkers healthcare system, how our nutritional system is ruled by the influence of corporations (i.e. money and greed) and not by what is right or best for the people, the plight of food deserts in lower-income communities, and the changes we can make to revolutionize all this and take back our health.

The filmmaker's father is world-renowned researcher and author T. Colin Campbell, author of The China Study, the most comprehensive study on diet and its effects on disease. He provides a valuable basis to the documentary, but he isn't exactly the focus. His son Nelson Campbell puts his father's research into practice by hosting plant-based jumpstarts to a rural North Carolina community, and the results are pretty amazing! After adopting a plant-based diet for just 10 days, the overall cholesterol levels of the group dropped significantly, and other see noticeable improvements in other diagnosed diseases.

He also works with a Senator in the Kentucky legislator on a bill that basically validates the benefits of a plant-based diet, which is a whole fascinating, nail-biting process that just goes to show how government officials have corporations interests at heart rather than doing good for the public. When that doesn't go as planned, Campbell creates a grassroots campaign for bringing the truth to the public, and the result is really empowering.

Along the way, doctors, lawmakers, politicians, farmers, researchers, nutritionists, and regular people are interviewed and discuss their views on a plant-based diet and why many of them have already made the switch. All these segments make for a fantastic documentary, and not only may it inspire many to go plant-based, but it will also inspire those who are already vegetarian or vegan to adopt a more healthy, whole-foods based diet (I am one of those junk food vegans who could definitely benefit from a cleaner diet!).

At the end of the documentary, you'll wonder why this information has been suppressed from the public for so long (the short answer: money talks, and lawmakers are keeping agribusiness happy while lying to the American public), and you'll kinda be enraged at our government, healthcare system, and food industry.

It really is an empowering, inspirational documentary that had me tearing up at several different segments. The truth is right in front of us, but it's up to us take that truth and start demanding some real change in this country. And we can start making that change within ourselves, with a whole foods, plant-based diet.

I highly recommend checking out this documentary, which is non-graphic and presents the facts in a really straightforward way. This approach makes it easy to watch and share with friends and family. I also happen to think it makes a fantastic double-feature with Cowspiracy, also on Netflix!

Don't have Netflix? PlantPure Nation is also available to watch on Amazon!

And if you are looking to eat a more whole foods, plant-based diet, or simply looking for more information, PlantPure Nation has some great resources on their website!
Posted by Sarah E. Jahier at 11:00 AM