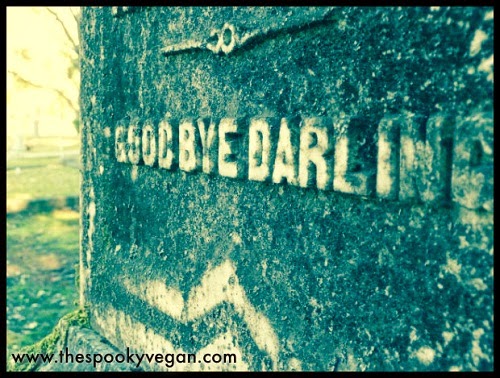 Ok, this is going to be completely different than what I usually write about, and a topic that might become more of a mainstay here on the blog. "Let's talk about Death, baby! Let's talk about you and me!" Yes, I want to talk to you about great big ol' Death and how I've been awakened to finally accept death and openly discuss the subject in a positive light. I have been wanting to write on the subject for a while, and was finally spurned to action after finishing Caitlin Doughty’s mortician memoir Smoke Gets in Your Eyes: And Other Lessons from the Crematory.  In this fantastic book, Doughty recounts her start in the death industry working in a crematorium and how this job led to her eye-opening journey to death acceptance. I have followed Caitlin’s delightful straight-talk about death from her YouTube series Ask a Mortician to her site The Order of the Good Death and now to her memoir. It is always a delight to read about her accounts in the death industry, and how she encourages death acceptance and death positivity instead of the closed-off view of death modern society currently suffers from.

I have always been a little obsessed with death, but reading her book really got me thinking about my own views on death and what I want to happen to my body when I die (natural burial all the way, please!). She has lead me to ponder my views on Death itself and how we as a society treat dying and mourning (hint: it usually isn't in a positive light, or any light at all really - we like to keep death pretty distant).

All my life I have been intrigued by death and have read all I could get my hands on regarding the broad subject, from historical and modern funerary practices to cemeteries to the stages of decay to body farms to autopsies to cultural rituals and so on. All this has led me to reflect on how detached our Western culture is from death and dying, even though we see it all the time on the news or represented in movies, TV shows, and books. I thought about all the gory images I had seen, but also realized I had never seen a dead body IRL. The closest I probably got was my Nonno’s funeral, which was actually closed casket, so really doesn't even count.

The more I think about it, the more I realize how hidden death is from Western culture. But why? Is it that we are so frightened of death that we dare not face it? Do we think dead bodies will contaminate us with disease? Do we think seeing our loved ones’ dead bodies will be too disturbing? It is probably a combination of all these issues, plus many more.

In Western culture, most often death is experienced at a distance, from the relative safety of TV sets or computers, closed behind caskets, as if this distance will keep us safe when our own time comes. Funny thing is, everyone dies. Death is the natural order of things, and to deny it, is, well, to deny ourselves. No amount of denial will keep anyone from dying, though there are many who like to believe they are somehow immortal. I myself am guilty of this mindset, not really believing or taking into account that one day I will die. I mean, REALLY take the time to think about the simple, undeniable fact – one day you will die. It might be today, tomorrow, years in the future, but it is inevitable. 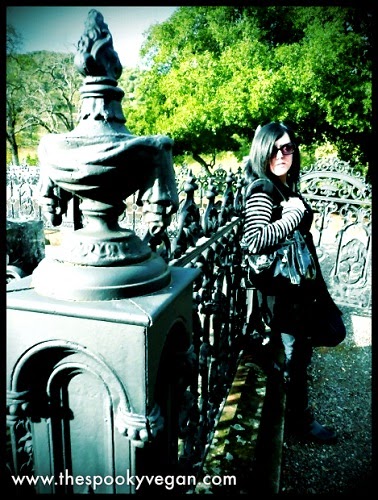 Hanging at the historic Yountville Cemetery
in Yountville, CA

So why something so certain, so 100% true is hidden away is pretty baffling when you think about it. As a society we should be embracing death, since it is a constant that will never go away. Death shouldn't be shunned, shouldn't be hidden, but should be present, as it is everyone’ s fate. I am a huge proponent of being more open about death, planning better for death, and just having honest and open discussions on the subject.

And here is what is so great about Caitlin Doughty and her death work – she encourages death acceptance and promotes death education. She is all for alternative funerary arrangements – including her dream of opening her own funeral home that is a more open environment where families can care for their dead and take the time to truly say goodbye. She encourages home funerals, natural burial, and turning our current death-scape and the funeral industry topsy-turvy! And  to all this I say yes, yes, YES!

And it's not only her - besides Doughty's The Order of the Good Death, Ask a Mortician series, and book, there are many others out there discussing death - Death Salon is an event held a few times a year in different locations (FYI - there are several upcoming events, one at The Getty Villa in Los Angeles on April 26, 2015 which I will likely be attending, and another in Philadelphia in October 2015 at none other than The Mütter Museum!) where intellectual discussions are held on death, mourning, funeral preparations, how different cultures view death, and many other death topics. There are tons of other people and places that are bringing Death out of the shadows and into the limelight - The Morbid Anatomy Museum (whose name is pretty self-explanatory), Nourishing Death (a cool site about funerary foods - I want to do a series on veganizing these recipes!), Bess Lovejoy's book Rest in Pieces: The Curious Fates of Famous Corpses and other books of its ilk, Grave Matters (a rad site featuring the writings of medical historian and author Lindsey Fitzharris), and so many more! Another wonderful thing I've noticed while reading up on death - many of those participating in the death positive/acceptance movement are women. Way to be forward-thinking, ladies!

In closing, I'm excited that death is being openly discussed and that so much positive interest is being generated about death, changing funerary customs, and just being more in touch with our mortality. Reading the articles and watching the video series mentioned above have really opened my eyes to how rich the subject of death really is, and how death should be embraced and discussed rather than shunned and kept hidden.

So let’s keep talking about death! Let's start thinking about our own deaths and our loved ones’ deaths, not in an obsessive, morbid manner but more in practical terms. Let’s plan for the future, foster discussions on death acceptance, and not be scared or uncomfortable to discuss what we want to happen when we die. Denial or ignorance won’t stop death, so let’s plan for it, educate ourselves, and keep talking about it. The more we think, talk, and do, the less scary big ol’ Death becomes.

I know I generally focus on other topics, but I am going to do some more posts on death culture and the like. I hope that my small contributions will at least make people think about death a bit more or even make them more comfortable with the subject of death. At the very least, I hope readers will check out The Order of the Good Death and the other excellent resources mentioned above to open their minds.