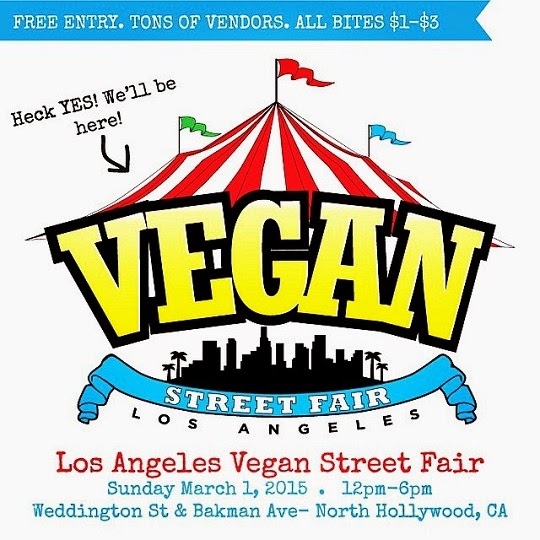 The first ever Vegan Street Fair is coming to Southern California this March! The event will be held in North Hollywood on Sunday, March 1st and will feature tons of vegan vendors dishing up affordable "bites" of food! Want to know more? Check out the description of this awesome event from the VSF website:

Vegan Street Fair is an annual vegan food celebration where local vegan and vegan-friendly restaurants come together to serve you bite-size portions of vegan eats all in one place.

The best part? All bite-size portions are $3 max and entrance is FREE.

At VSF, you get to nosh on as many local eats as your heart desires (and your belly can hold) for street fair prices. So instead of buying a $10 plate of vegan nachos and sitting out the rest of the amazing food experiences, you get bites from one vendor, move on to the next, and enjoy all of your city's BEST vegan eats without getting full for a fraction of the price of a regular meal.

VSF is the true vegan foodie dream -  EAT ALL THE VEGAN THINGS.

At all the vegan festivals I've attended in the past, I've wanted to eat all the vegan things, but after about two plates of food from various vendors my stomach (and oftentimes pants) would give up and I could eat no more. Vegan Street Fair to the rescue, where I can eat a ton of food from lots of different vendors without having to worry about getting full on just a few vendors' dishes! Plus, it is free to get in and the dishes are cheaper, so I'll end up getting a lot more bang for my buck.

Vendors haven't been announced yet, but I expect the best vegan restaurants, the yummiest vegan bakeries, the awesomest vegan snack companies, and many more to be in attendance! I am keeping my fingers crossed that some vendors from my personal wish list show up for VSF, including: Franken Stand, Seabirds Kitchen, Courtesan Cupcakes, Vromage Artisan Cheese, Bite Me Kitchen, Doomie's Home Cookin, Clara's Cakes, Life is Sweet Bakeshop, Sensitive Sweets, Shojin, and more (I have too many to list). If even a fraction of all the vegan foodie places in SoCal show up I will be a very happy spooky vegan!

The tagline for the event is "EAT ALL THE VEGAN THINGS!" and that is a sentiment I can definitely get behind!

I hope to see you there!