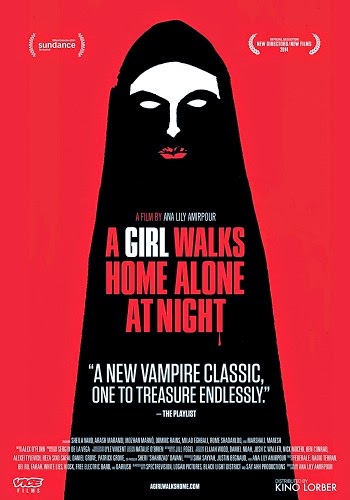 I have been DYING to see A Girl Walks Home Alone at Night, billed as the "first Iranian vampire Western ever made", and it was one of my most-anticipated horror films of 2015, so I was basically counting the days until it showed up on Netflix streaming! And it finally premiered a few days ago so I rushed home from work to see it...

Here is the synopsis:

In the Iranian ghost-town Bad City, a place that reeks of death and loneliness, the townspeople are unaware they are being stalked by a lonesome vampire.

This black and white film is the feature debut from writer/director Ana Lily Amirpour, and I am always stoked to see a female-helmed film, especially one as unique as this one! The film isn't your typical horror movie, in fact I'm not sure I would even call it horror. It's not for everyone, but I found it stylish and engaging, blending elements from pulp cinema, Westerns, film noir, romance, and horror. It has a languid, moody tone, some killer music, gorgeous visuals, and a misfit love (?) story.

I recommend A Girl Walks Home Alone at Night if you are in the mood for a one-of-a-kind film. You can watch it streaming now on Netflix, and you can also purchase it on Amazon!
Posted by Sarah E. Jahier at 10:00 AM