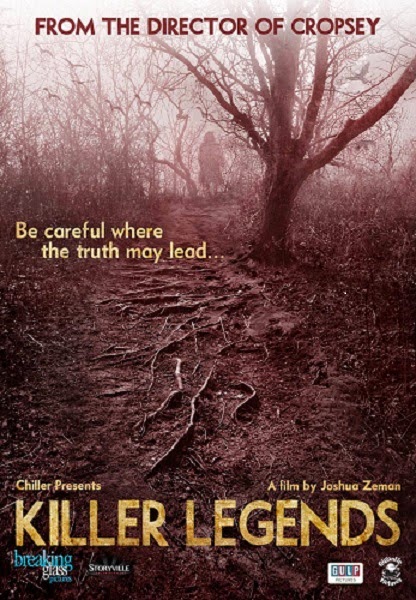 I watch a lot of Netflix and am always looking for new things to watch, so I thought I would start this new section called "Watch Now on Netflix" to recommend titles I've recently enjoyed! All titles are streaming on Netflix at the time of posting, but you can also find them on other streaming services, on DVD or on Blu-ray (links below will lead to titles' Amazon pages).

The other night I watched Killer Legends, a documentary that follows Joshua Zeman (who brought us the chilling documentary Cropsey which I also highly recommend) and Rachel Mills as they explore four urban legends and their shocking true-life origins. They find that the truth is sometimes far more horrifying than fiction.

We follow the duo as they delve into the urban legends of "the hook man" or the cautionary tale about an escaped mental patient with a hook for a hand killing or nearly killing teenagers parked on Lover's Lane, the warnings of tainted Halloween candy, killer clowns, and the ever-popular tale of babysitters being stalked/murdered by a crazed lunatic.

Juxtaposed against these are the true-life tales that may have inspired these well-known urban legends - the Moonlight Murders that took place in Texarkana in the 1940's that were attributed to "The Phantom" and inspired the horror movie The Town That Dreaded Sundown and its recent remake, the heartbreaking case of a young boy being poisoned by candy after trick or treating on Halloween and the monster responsible, who has also been called the man who ruined Halloween, the strange sightings in the 1980s in Chicago of a clown trying to lure children into a van and the most famous evil clown, Pogo, or John Wayne Gacy, a serial killer responsible for the deaths of many young males, and finally the unsolved murder of Janett Christman, who was brutally killed in the 1950s while babysitting.

I really enjoyed this documentary, which was released in 2014. I stumbled upon it just browsing Netflix, and truth be told it actually looked a little cheesy at first, so I put off watching it. I finally gave it a try and I'm glad I did, because this documentary was captivating!

It shows real footage and often grisly photos of the actual crimes that are supposedly the origins of these four urban legends and it does an excellent job of tying everything together..Zeman and Mills visit the towns and cities where the real-life crimes took place, and go to the locations of the actual crime scenes as well as interview investigators, townsfolk, psychologists and other experts on the cases and the urban legends. It was very interesting to discover what might be the origins of urban legends, and most of the time the truth was far more shocking than the legends themselves.

Killer Legends is an excellent documentary, and I suggest you watch it now!
Posted by Sarah E. Jahier at 3:30 AM