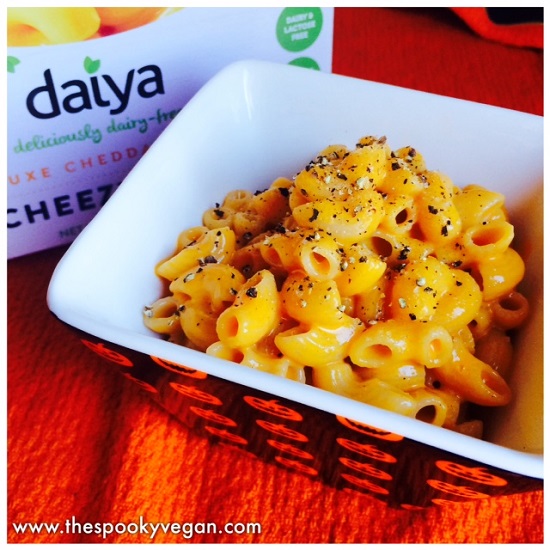 Just a year or so ago, vegans didn't have many options for cruelty-free mac and cheese. We had the delicious frozen mac and cheese from Amy's [review], but the first boxed vegan mac and cheese that was decent was Earth Balance's version [review], released just last year in 2014! After that, many new vegan mac and cheese options have hit the market, including Daiya's three different types. I had tried this kind at Expo West (read about my initial thoughts on it HERE), so I was ecstatic when it finally hit shelves.

Daiya's Cheezy Mac is different from other brands' mac and cheeses as it comes with a packet of cheezy sauce and instead of powdered cheese mix, so you don't need to add any non-dairy milk or vegan butter to make it. Everything you need (macaroni pasta and cheezy sauce) are included in the box it comes in. 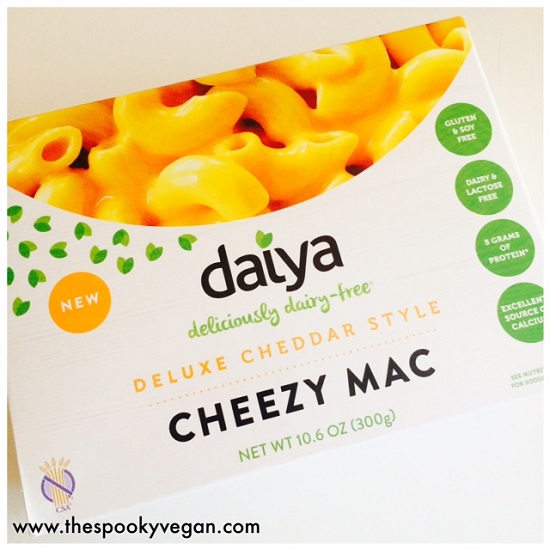 Everything you need is in the box!

There are three different flavors of Cheezy Mac offered by Daiya: Deluxe Cheddar Style, Deluxe Alfredo Style, and Deluxe White Cheddar Style Veggie. I've tried all three, and I can confidently say they are all delicious! My favorite of the three is the cheddar style, though I really love the alfredo and veggie styles, too!

As I mentioned earlier, I had tried this at Expo, but couldn't wait to make it myself! I bought it at Whole Foods for around $6. Yes, it is one of the pricier mac and cheeses, but its flavor and consistency makes the cost well worth it! Plus, as mentioned above, you don't need to add anything else when making this Cheezy Mac, just the pasta and sauce packet included in the box! It is so convenient and easy to make, and reminds me of my pre-vegan days in college when I ate Velveeta's shells and cheese. To prepare, you just boil water, add pasta, drain, then add the cheezy sauce packet. So simple and it comes out so good! Now I can have the same nostalgic Velveeta experience without all the cruelty and without gross ingredients! Woo hoo! 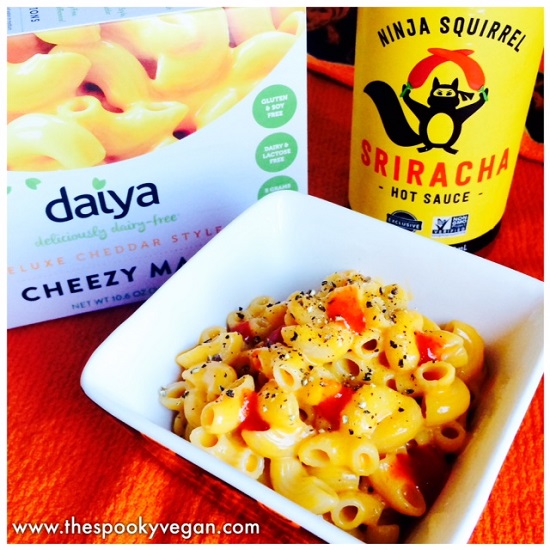 The consistency of the Cheezy Mac is incredible - the pasta is gluten-free, however it doesn't come out gummy like some brands and has a great texture and flavor! And the cheezy sauce...DAMN! That stuff is on-point and so freaking' good - I was scraping the sides of the pot and licking the spoon to try and get every last drop of deliciousness!

For more info, you can visit Daiya's website!
Posted by Sarah E. Jahier at 8:00 AM