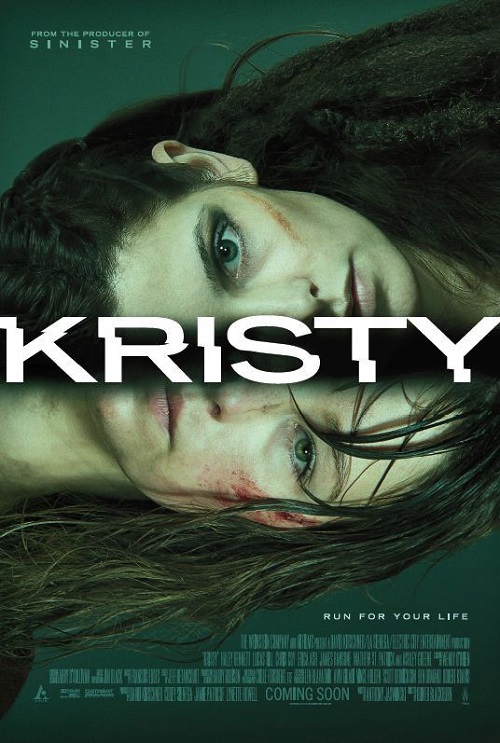 I wasn't sure what to expect from Kristy when I happened upon it while scrolling through new titles on Netflix, however, I vaguely recall someone recommending the film, so I gave it a go. It is directed by Oliver Blackburn (director of Donkey Punch, which I didn't care for), and written by Anthony Jaswinski, which further piqued my interest as he wrote the enjoyable Vanishing on 7th Street. So this past weekend I watched it and was certainly glad I did...

The film's opening forewarns us that there is an online group who are perpetuating murders against pretty, privileged, but otherwise innocent young women, whom they call "Kristy". They stalk their prey before killing them, and uploading these videos to their group online, which appears to be more like a Satanic cult than your regular meetup group. We then cut to Justine (Haley Bennett, from The Hole and The Haunting of Molly Hartley), a hard-working co-ed who is earning her scholarship to her college through work study and scholarships. While her friends and boyfriend are jetting off to be with their well-off families in Aspen and France for Thanksgiving break, she stays alone on campus to study in order to keep her grades up and not lose her scholarship. Her only companions during the long weekend are her resident hall security guard, a groundskeeper, and a gate guard. On Thanksgiving night she borrows her roommate's BMW to grab some snacks from the local convenience store, but she draws the attention of a menacing woman (Ashley Greene, from Burying the Ex and The Apparition). Justine high-tails it back to the safety of the college, but the woman and her masked companions have labeled Justine a "Kristy" and begin their hunt...

While it doesn't appear the Kristy breaks any new ground and while its premise certainly isn't original, I found myself thoroughly enjoying this movie! I liked how it opened on the explanation for the seemingly random killings, how it developed the character of Justine and made her extremely likable (her dance down the deserted college halls was especially endearing), and I liked how it suddenly switched gears with the appearance of the woman and her gang. I enjoyed how it played on isolation and the fear of being alone or being in the wrong place at the wrong time, while also addressing class conflict. It was thrilling, had some of the best jump scares I've seen in a long time, and basically kept me on the edge of my seat. It reminded me a lot of The Strangers (another flick I love), but with the added chutzpah of having a kick-ass final girl like in a slasher movie, with the added bonus of a truly chilling female villain.

It's on Netflix streaming, so watch it now!
Posted by Sarah E. Jahier at 10:30 AM