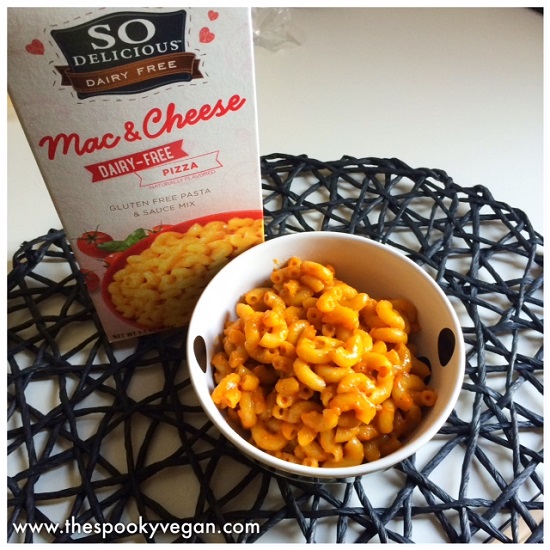 So Delicious' Pizza Mac and Cheese

I really had high hopes for So Delicious' Pizza Mac and Cheese, cuz how could anything pizza-flavored be bad? Well, let me save you the horror of eating this and let me tell you - it's BAD. I really hate giving bad reviews to vegan food items, but sometimes companies just don't hit the mark, and just because something is vegan doesn't mean it's good. Plus, if someone veg-curious picked this up and HATED it, that doesn't really do veganism any justice. However, there is a silver lining to this mac and cheese, and I did manage to salvage it...read on to find out how.

I picked up this mac and cheese at Whole Foods because I'm pizza-obsessed and have liked pretty much everything else So Delicious has put out (ummm, I'm obsessed with their vegan ice cream!). Vegan mac and cheese has come a long way, and there have been so many new boxed mac and cheese options after Earth Balance scored big with their awesome vegan option [review]. I had heard rumblings that this So Delicious mac and cheese wasn't very good, but I chalked it up to pizza-haters and went ahead and purchased a box. It wasn't that expensive (I believe around $3), so that was another incentive to buying it. 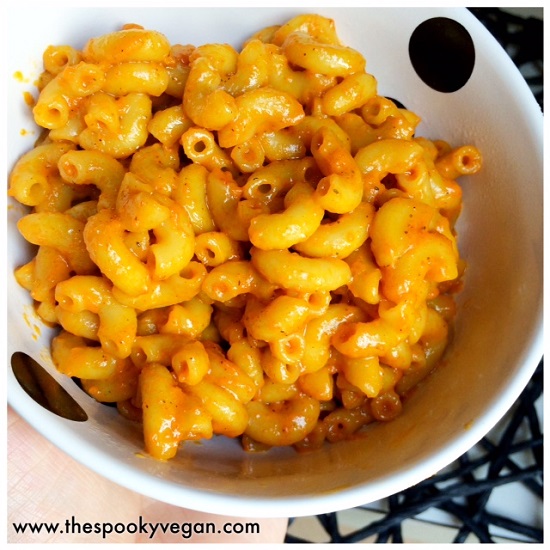 It was easy enough to make - add pasta to boiling water, drain, then add the powdered cheese sauce as well as vegan butter (I used Earth Balance) and non-dairy milk (I used oat milk), mix it all up and serve. It came out kinda red/dark orange-looking after adding the sauce, and right off the bat I could tell it smelled kinda funky. I tried it plain, without any added pepper or salt, and was really disappointed in the flavor (though surprisingly the texture of the gluten-free pasta was fine). And by disappointed, I mean I almost gagged. It had a stale barf taste, and of course I was immediately like WTF. I tried adding salt, pepper, sriracha, anything that might help fix the flavor. Nothing seemed to work. Then I decided to add some Amy's vegan chili to make some chili mac. I didn't hold out much hope that this would change things, but surprisingly the addition of the chili made it edible. With that, I was able to enjoy a bowl. Even more surprising is that Mister Spooky LOVED it and ate the rest!

So while this mac and cheese alone is not recommended, if you mix it up with some veg chili it vastly improves the flavor! There is a silver lining with So Delicious' Pizza Mac and Cheese, just don't try to eat it by itself. 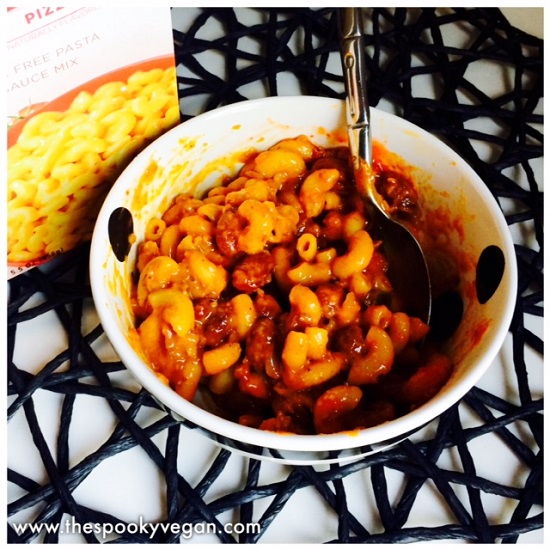 So Delicious' Pizza Mac and Cheese with Amy's Medium Chili mixed in!

I'm not sure if this will be on shelves much longer, as it isn't even listed on So Delicious' website!

Check out my previous review of Annie's Shells and Creamy Sauce from earlier this week, and keep an eye out later this week for a review of Daiya's mac and cheese.
Posted by Sarah E. Jahier at 8:30 AM