Pageant of the MONSTERS Returns to Laguna Beach 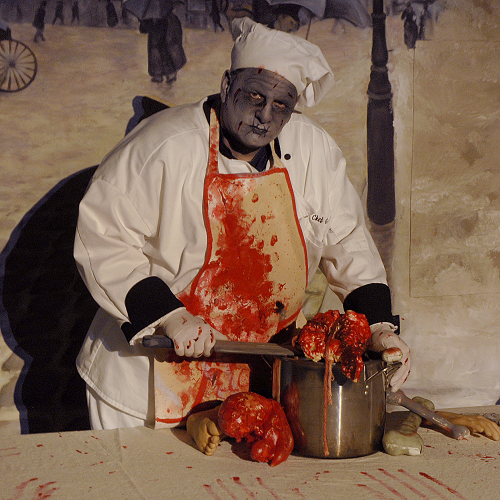 Like I reported a few months ago, this year will see the return of the Pageant of the Monsters to Laguna Beach! The event is only held every five years, and features a terrifying twist on the traditional Pageant of the Masters. It will feature spooky scenes, macabre music, and many more tricks and treats for attendees! They have announced their full schedule full of tricks and treats, check it out via the official press release below:

LAGUNA BEACH, CA — Just when you thought it was safe to go backstage…The Festival of Arts and Pageant of the Masters brings a "monster" of a good time to Laguna Beach!

Reviving an event from years past, Pageant of the Masters Director Diane Challis Davy presents the Pageant of the Monsters, transforming the Pageant's backstage into a Haunted House with an artistic twist. The event will take place on October 26, 27, 28 and 31 at the Festival of Arts from 6 - 9:30 PM. This is the 5th presentation of Pageant of the Monsters. Davy originated the haunted house idea in 1996, it was repeated in 1997 and then again in 2007 and 2013.

This year, the Pageant of the Masters' creative team of artists and technicians has reunited to resurrect the acclaimed Halloween Haunted House as part of the Pageant of the Masters 85th Anniversary celebration. Guests will be directed through the amphitheater, Pageant workshops and stage, which have been transformed into a series of eerie artistically presented vignettes.

Themed Raiders of the Lost Art, guests will follow the footsteps of legendary archaeologist and adventurer "Cincinnati Smith" on a perilous quest to recover treasures from exotic locales across the globe. Trek through the creepy jungle empire of the Amazon to the desert tombs of the pharaohs in this whimsical and haunted spoof.

Davy reveals, "It’s not your usual haunted house. It will be a little scary and spooky, but lots of fun for the whole family."

In addition to the haunted house, the Festival of Arts will also be holding a scarecrow competition inviting local community groups, clubs, organizations and individuals to participate. Attendees will be able to vote on their favorite from October 26 to 28 and the winners will be announced on October 31. This competition is open to the public and cash prizes will be awarded. Deadline to register is October 12. For information on entering the scarecrow contest, please visit foapom.com/monsters.

Other fiendish tricks and treats on the Festival grounds include:
Admission and Location:

Tickets are $15 for adults in advance ($20 at the door) and $10 for children 12 and under. This event is not recommended for children under 5. Tickets are available online at PageantTickets.com or by phone 800-487-3378. Costumes may be worn by guests ages 12 and under. Guests 13 and older are not permitted to wear costumes. The event will take place at Festival of Arts, 650 Laguna Canyon Road, Laguna Beach, CA 92651.

Hope to scare ya there!
Posted by Sarah E. Jahier at 6:30 AM