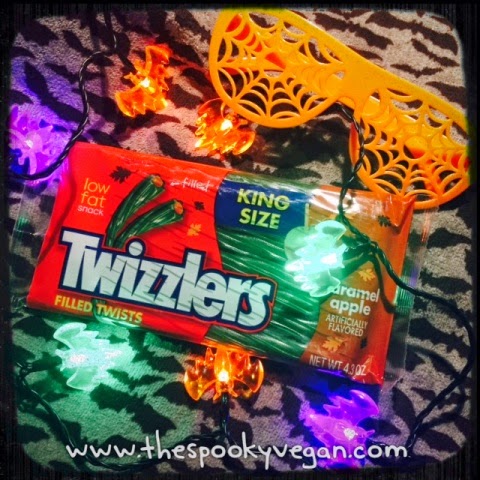 Twizzlers are one of the “mainstream” candies that are accidentally vegan, so I was excited to see that they had a new flavor available for the Halloween season – Caramel Apple filled Twizzlers! I wasn't sure if this particular flavor would also be vegan, but after a quick scan of the ingredients it looks like the Caramel Apple Twizzlers are vegan as well!

These Twizzlers are green on the outside, and filled with a weird, pinkish caramel-flavored filling on the inside. They look a little strange, but their flavor is surprisingly delicious! I was expecting them to have a strong tart, apple flavor, but instead they have a more subtle apple flavor, with stronger hints of rich, creamy caramel flavor. I really liked the flavor and found these to be addicting! 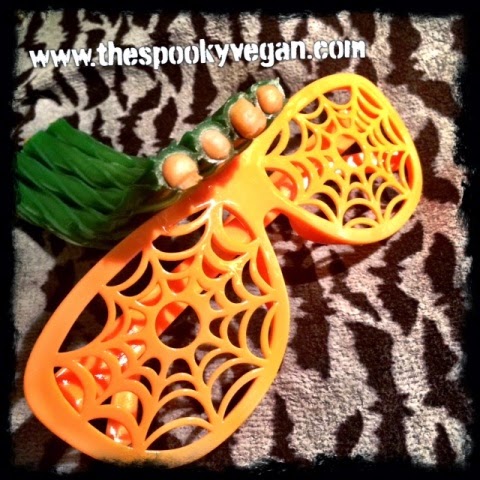 A peek at the weird-colored filling of the Twizzlers - weird color,
but great taste! And doncha love the spiderweb glasses? Got
them at Target for a buck!

I wasn't expecting to like these Caramel Apple Twizzlers so much, but I was surprised just how much I ended up loving them! They are selling them in perfect little packets for trick or treaters (or personal enjoyment) as well as in a king size, which is just right for snacking on while watching a horror movie.

I definitely recommend these Halloween Twizzlers and will definitely be buying them again this year!

UPDATE: I must have my Halloween blinders on because I totally missed "glycerol monostearate" (aka monoglycerides) in the ingredients. I usually avoid anything with any derivative of "stearate" in the ingredients, as this ingredient is usually sourced from animal fat (sometimes it is from vegetable sources). I also learned recently that mono- and diglycerides are usually (but not always) animal-derived. Another questionable ingredient in these Twizzler are the "natural" ingredients, which could pretty much be anything.

One thing to note: regular Twizzlers also contain these ingredients (instead of glycerol monostearate listed they list monoglycerides), and these are often cited as being suitable for vegans/vegetarians as well.

Ultimately, it is up to each individual vegan/vegetarian to decide if they will choose to avoid these ingredients/products. As for my personal opinion, I think it is fine to follow the 99.9% vegan rule as veganism isn't about perfection to me (in our flawed world, there is no way to be 100% vegan). I prefer on focusing on the bigger picture instead of stressing about possible small amounts of animal products. Would I buy these again? Probably not, but I'm also not obsessing over the possibility of consuming a tiny amount of animal by-product either.

Go forth and do what you think is right, and think about what will make the biggest impact on saving the animals!
Posted by Sarah E. Jahier at 8:00 AM