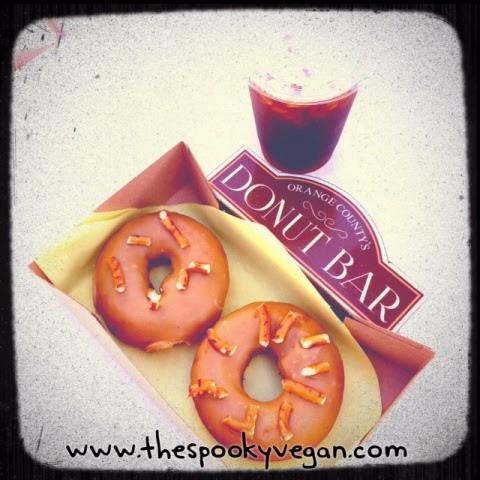 Donut Bar has a location in San Diego and recently opened their second location in Fountain Valley. I visited their new Orange County location this past Saturday morning and got there around 10:30 or 11 AM. Luckily, they weren't sold out of their vegan doughnuts yet (they usually sell out ALL their doughnuts by noon, and I'm sure the vegan ones go faster). 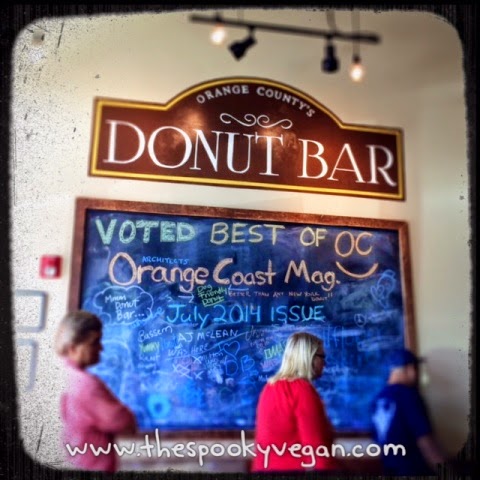 Inside the Donut Bar, with lots of hungry people waiting in line.

Their vegan option that day was Caramel Pretzel, so of course I had to get two (one for now, one for later). It was $3 per doughnut, which was totally worth it as they were HUGE! The doughnut was generously topped with a caramel-type frosting and pretzels. The cake-y inside was perfectly fluffy and moist without being greasy. I loved the crunch that the pretzels added to the exterior of the doughnut, too! Of course they have tons of other non-vegan options (see menu board below), and even something called a D-Waffle, or doughnut waffle, which is a waffle made with doughnut batter! I wish THAT was vegan! I'm really happy they have a delicious vegan doughnut option, though!

They also had Stumptown Coffee on tap (Stumptown cold brew on tap?! HEAVEN!!), so I was super excited about that too! There is another coffee shop next door, and if I were them I would be worried, because if I were closer I would hitting up Donut Bar every day just for the Stumptown cold brew! It was so, so good! They also have other coffee drinks available, including a hot cuppa coffee for a buck! 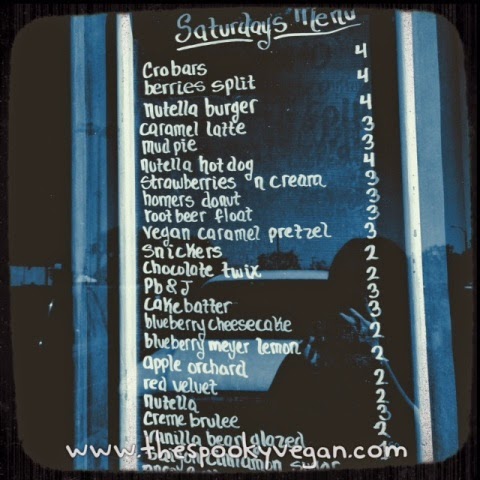 Doughnuts of the day, plus a peek at their prices.
The menu changes daily!

Besides the delicious doughnut and coffee, the atmosphere was awesome as well. The space itself is really cute, with a kind of vintage feel and a big open space. They only have a few seats inside, but lots of seating on the shared patio outside. It isn't in the prettiest area (just a strip mall across the street from a Costco shopping center), but biting into one of their doughnuts will make you forget about the surroundings!

I also want to mention that the friendly service really adds to the charm of this place. The servers were very helpful and all smiles! The server who helped me was knowledgeable of their vegan options and had a great upbeat attitude (without being annoying). The positive vibes really added to the fun atmosphere! 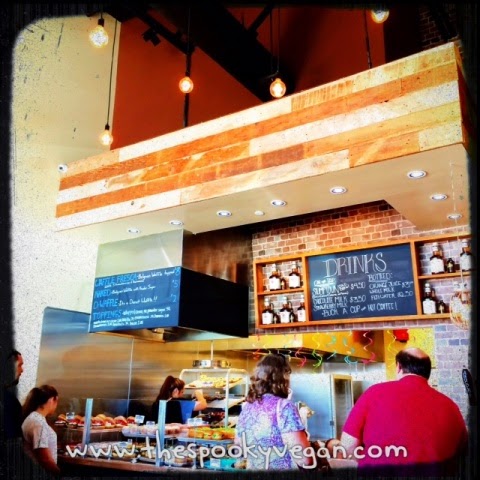 Love the warm and open design of Donut Bar!

I also had a chance to speak to a manager/owner, who said they have a different vegan option every day, like Salted Caramel, Spiced Chai, and other creations. He told me that menus are posted to their Facebook page and Instagram the night before so people can check out what options will be available the next day. I love this idea and think it is so helpful!

I really dug the Donut Bar and will definitely be back. I would recommend getting there early if you decide to visit, as they do sell out of their doughnuts fairly fast and they are a popular place (prepare to wait in line)! When I left there was only one vegan doughnut left and a line of customers out the door.

UPDATE 17-September-2014: Donut Bar is now offering multiple vegan options EVERY DAY! I went this past Saturday and picked up a Strawberry Split donut filled with fresh strawberries and cream, a salted caramel donut, a peanut butter and jelly bar, and a creme brulee donut! And they were all vegan and incredibly delicious, woo hoo! Their menu also more clearly identifies the vegan options of the day with a "V"! Check out pics below: 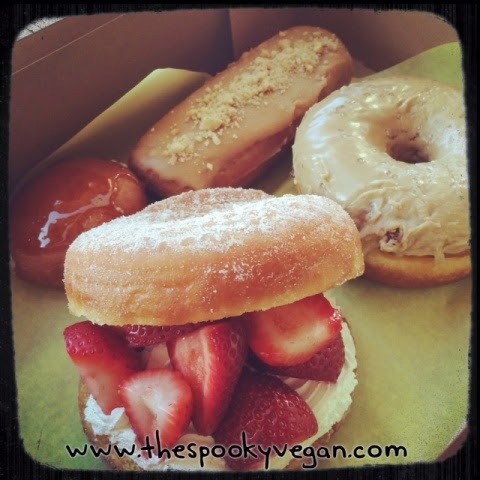 Look at all that vegan deliciousness! 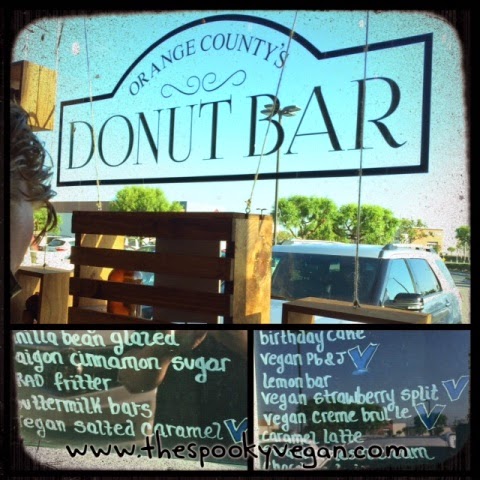 Donut Bar front window that lists the donuts of the day - notice how
all the vegan options have a big "V" next to them!
Posted by Sarah E. Jahier at 9:00 AM