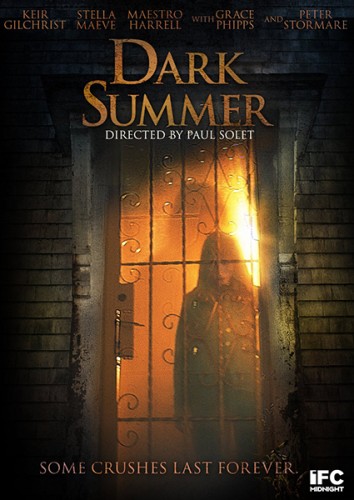 I have been looking forward to Paul Solet's Dark Summer for quite some time, so I was ecstatic to find it streaming on Netflix!

The film follows Daniel (Keir Gilchrist of It Follows) as he is placed on house arrest by his quietly menacing parole officer (played by the always perfect Peter Stormare) for hacking into a classmate's online accounts. He is not allowed to use any electronics that connect to the internet or log into any social media or online accounts or leave his house per the terms of his house arrest. The claustrophobic atmosphere is set from the opening scenes of Daniel's lock-down, and we feel just as trapped as he is. He also isn't allowed to have friends over, but his two best friends Abby (Stella Maeve) and Kevin (Maestro Harrell) sneak in anyway (not hard, since Daniel's parents are away on business) and bring him an old iPad he can use to get online. They also reveal that Daniel was obsessed with the classmate whose accounts he hacked - Mona Wilson (played by Grace Phipps). This obsession spilled over into hacking into every one of her online accounts, with the exception of one, which Daniel still seems obsessed with cracking. When he receives a Skype invite from Mona on his pilfered iPad, Daniel is conflicted but can't help accepting anyway. The exchange that follows sets the tone for Daniel being haunted the remainder of the film.

Dark Summer is an atmospheric film that has some clever twists and turns to keep it interesting. While it isn't a scary movie, per se, it is still very entertaining and sucks you in. I also thought the actors did a phenomenal job with their characters. It is mostly Gilchrist, Maeve, and Harrell on-screen for the film, and each played their part wonderfully with great chemistry. I also liked how I wasn't quite sure if I should be rooting for Daniel or for the other characters. Was he just losing it and seeing things or was he truly being haunted? I also enjoyed how the film presented high school crushes and how there is a thin line between devotion and obsession.

The combination of Mike Le’s script and the direction by Paul Solet create an atmospheric film with some nice surprises. The visuals by director Solet created a claustrophobic feeling, while Mike Le's storyline kept me glued to the screen!

It seems that Dark Summer has a rather low rating online, which is a real shame. I think people were expecting something different, maybe a more straightforward horror with jump scares and the like, but I'm happy to say that Dark Summer is vastly different from your standard horror film. It's quieter, more atmospheric, and even smarter than most run-of-the-mill horror. And if that is something you are looking for, then I highly recommend you watch it now on Netflix!

It's also available on Amazon!
Posted by Sarah E. Jahier at 8:30 AM