I meant to post this at the beginning of July, but this month has just flown by! Is it just me or is this summer going by super-fast?! Not that I'm complaining, mind you; summer can suck it and autumn can't come soon enough! Anyways, I can't let these vegan junk food pics go to waste (though you will recognize some if you follow me on Instagram), so I'm sharing the yummy noms I ate in June below: 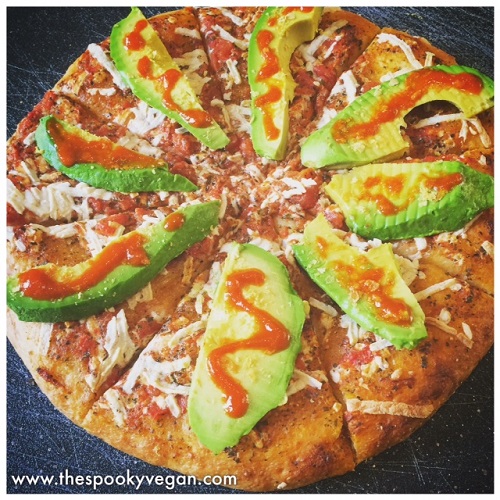 This is Amy's Vegan Margherita Pizza topped with avocado slices and sriracha.
I already love the pizza on its own, but the addition of the avocado and sriracha
just sky-rocketed its flavor! 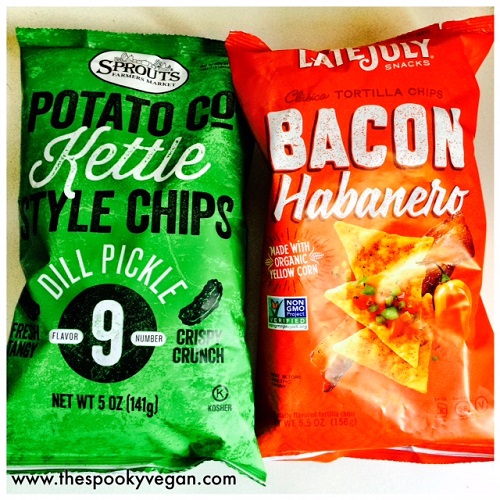 These Sprouts' brand Dill Pickle chips and Late July's Bacon Habanero Tortilla
Chips (surprisingly they are vegan!) are both AMAZING! I love pickles,
so my eyes lit up when I saw the dill pickle chips and they definitely did
not disappoint! And the bacon habanero chips are addicting! 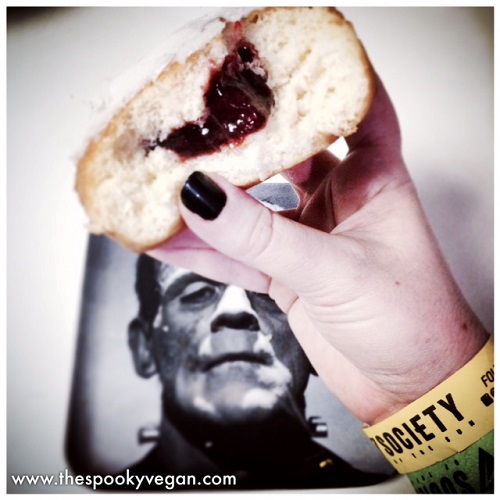 NOM! This is a vegan jelly-filled donut from The Donuttery in Huntington Beach!
Stopped there after an Alkaline Trio show, as per our tradition of
getting Donuttery donuts after concerts! 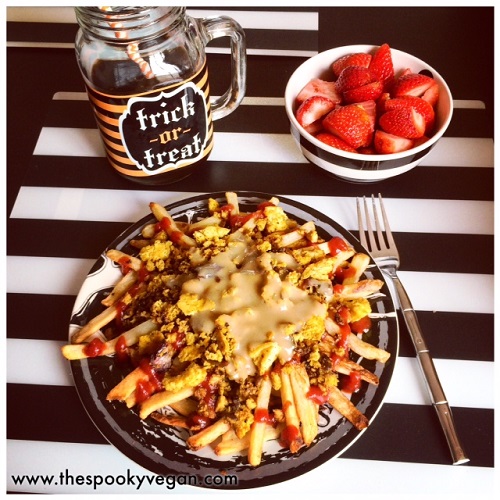 DUDES! I had a dream of making this French Fry scramble, and its tastiness
far surpassed how good I had dreamed it would be! I am drooling just looking
at this pic and remember how freakin' delicious this was! MUST. MAKE. AGAIN!
Served with homemade cold brew coffee (my own family recipe here!) and berries. 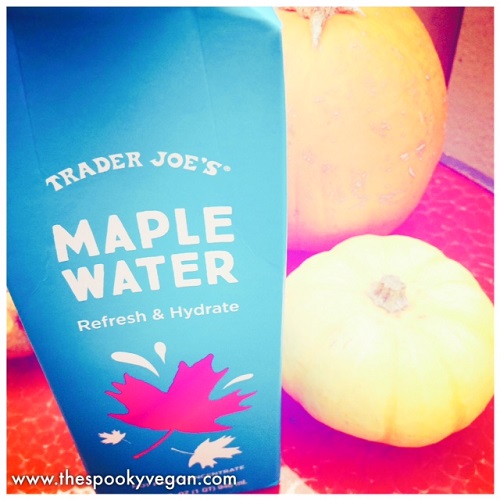 When I saw this Maple Water at Trader Joe's I knew I MUST have it! It just
reminded me of autumn leaves and fall, which I yearn for constantly.
When I tasted it, it has a slightly sweet flavor, but it was very subtle. It was
very refreshing, and I'd buy it again! This doesn't really qualify as junk food,
as this water may the healthiest item on this post... 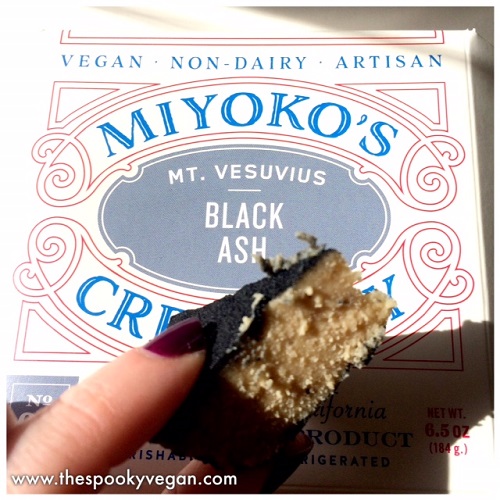 I can get Miyoko's delectable vegan cheeses at Mother's Markets now...which is
both delightful and dangerous! The Black Ash, shown above, is my favorite
so far! I just eat it straight from the package! 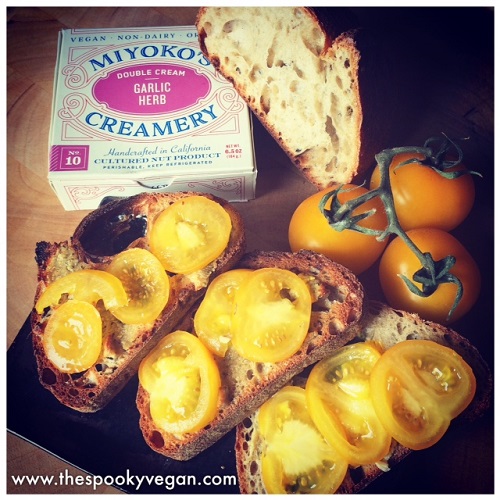 And here we have Miyoko's Double-Cream Garlic Herb, another incredible
fancy vegan cheese! Here I spread it on some olive bread and topped it with
yellow tomatoes. So much yum and the perfect summer snack! 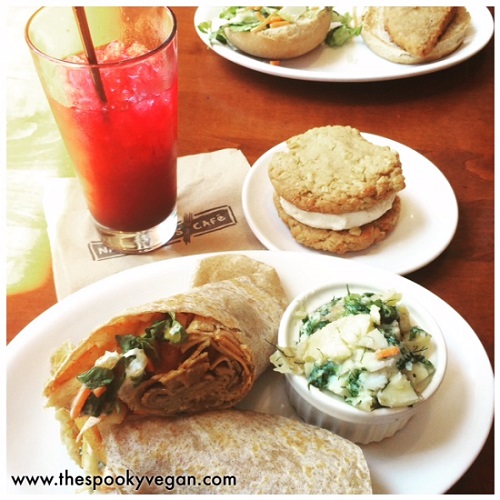 A few weekends ago, Native Foods had a special Bacon Cheeseburger Burrito,
which I rushed out to get, along with a side of their potato salad, blueberry
lavender lemonade, and oatmeal cream pie! I hadn't been to Native Foods
in a while, but this meal made me want to come back more often...soooo good! 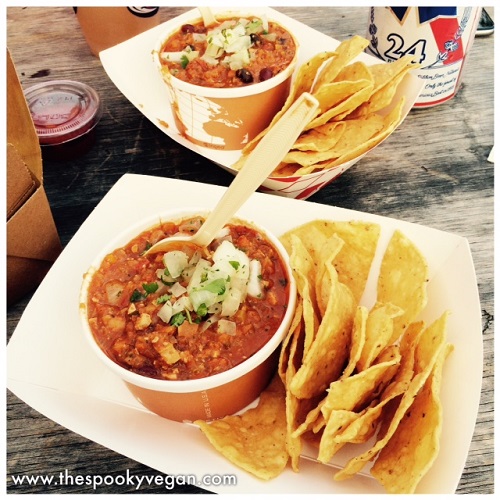 The Observatory has had a lot of kick-ass shows lately, and I discovered that
they have a few vegan options at their snack bar! This is the vegan chili and chips,
which was ok but nothing special. However, their fries (not pictured unfortunately,
as they were devoured too fast) were heavenly!! 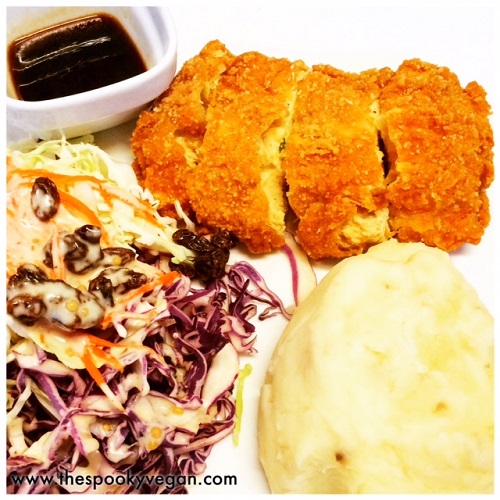 I finally made it back to Vegan Cuisine in Fountain Valley, and of course had
to get their vegan fried chicken, served with mashed potatoes and coleslaw.
Even a year later after originally eating this, it was still soooooo good! 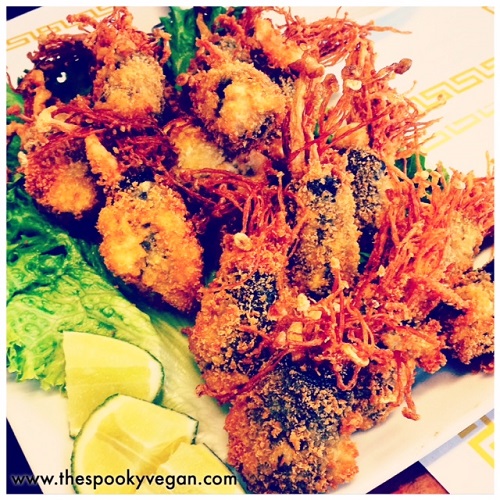 Also got this weird-looking Sea of Love appetizer at Vegan Cuisine - looks
like squid, but it's actually made with mushrooms! It was yummy as well. 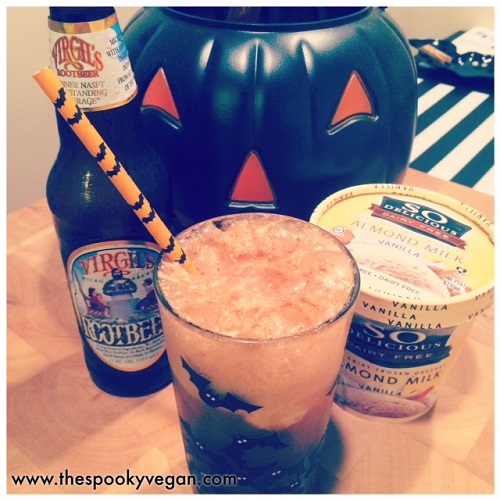 Hot summer nights call for root beer floats! I had mine with Virgil's Root Beer
and So Delicious Almond Milk Vanilla ice cream. Very, very creamy and satisfying!
Posted by Sarah E. Jahier at 7:00 AM