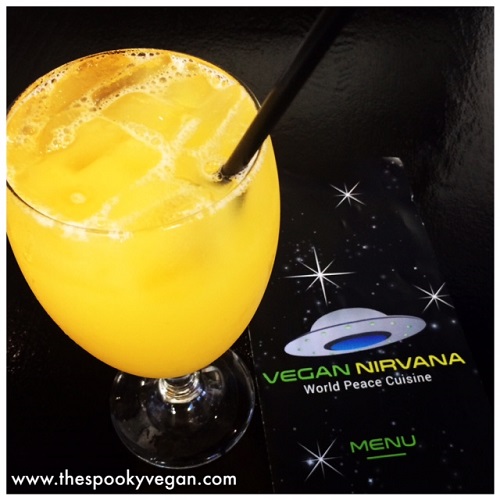 Over the weekend I finally got around to checking out Vegan Nirvana, a new vegan restaurant in Huntington Beach. Ok, new-ish vegan restaurant since they've probably been open for about 6 months! Even though it's only 20 minutes away from my house, for one reason or another I just hadn't made it over to Vegan Nirvana, even though I was keen on checking it out due to its eclectic decor as well as the raves it kept getting from vegan friends. It's got a unique space-hippie vibe, with its decor featuring UFOs, aliens, chakra-Jesus and its menu items have very enlightened names that sound like they are named after yoga poses. All that only adds to its charm, though! 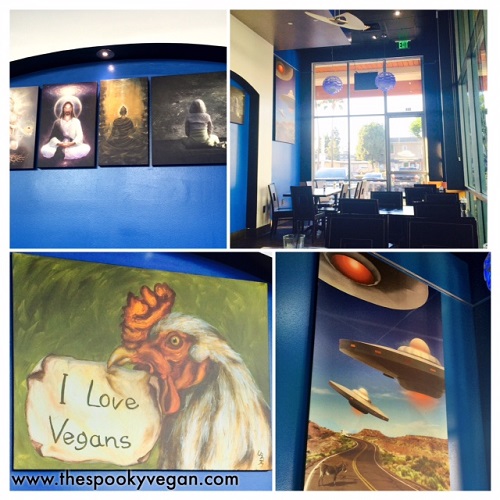 It's located in a small strip mall next to a theater off of Beach Boulevard and Warner Avenue in Huntington, and has plenty of parking. The restaurant itself has lots of seating, both inside and outside. Though there were a few bigger groups of people there when we arrived at 6pm on a Saturday, we were still able to find a table for four without issue. When we got there, there was only one person covering the front as well as all the tables, so service was a bit slow, though not to the point of annoyance. It was a rather relaxed atmosphere, which gave us plenty of time to peruse the menu, which I've posted below. 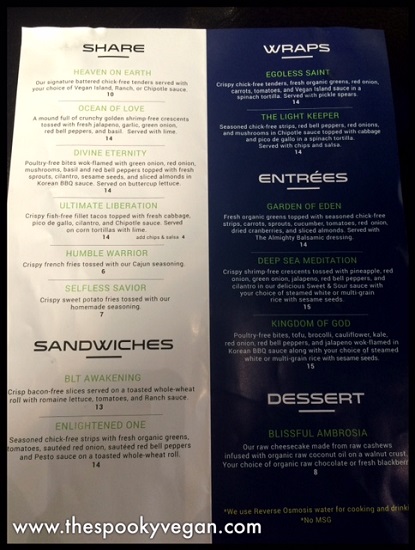 Vegan Nirvana menu as of July 2015

To be adventurous, I started off with the Jackfruit Limeade ($7), which was surprisingly sweet and refreshing. I'm not sure what I expected it to taste like, but it was really good and similar to mango/pineapple juice. I also loved the bright yellow color of it, as you can see in the photo at the top of this post. 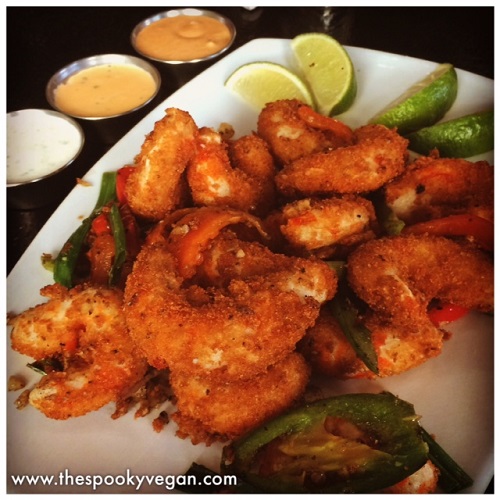 The four of us decided to share the Ocean of Love appetizer, which is "a mound of crunchy golden shrimp-free crescents tossed with fresh jalapeno, garlic, green onion, red bell peppers, and basil. Served with lime." We also asked for the three vegan dipping sauces - ranch, thousand island and chipotle - that they have. This appetizer was delicious, though I was expecting a bigger portion for $14. Still, it was really tasty, though it was so similar to shrimp in both taste and texture that I was a bit weirded out (but only for a second!). There were two omnivores in our party and they were both amazed that this appetizer was vegan and they couldn't get enough of it! And those sauces were delish! 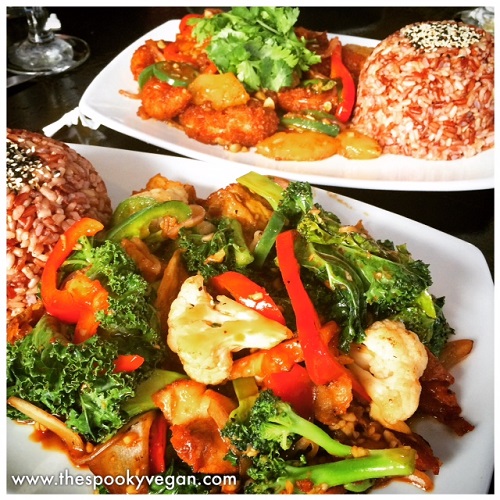 The Kingdom of God (front) and Deep Sea Meditation (back)

For the entrees, we ordered the Kingdom of God and Deep Sea Meditation to share family style. The Kingdom of God is "poultry-free bites, tofu, broccoli, cauliflower, kale, red onion, red bell peppers, and jalapeno wok-flamed in Korean BBQ sauce." And the Deep Sea Meditation is "crispy shrimp-free crescents tossed with pineapple, red onion, green onion, jalapeno, red bell peppers, and cilantro in a delicious sweet and sour sauce." They came with a choice of white or multi-grain rice topped with sesame seeds; we choose the multi-grain rice for both dishes. Both dishes were fantastic! The veggies themselves were prepared expertly, and the vegan meats were really good! And the sauces...swoon! So flavorful! None of us could get enough! Again, I felt like they were a little pricey at $15 each, but after eating them and realizing the high quality of the ingredients and preparation, I think the price is justified. 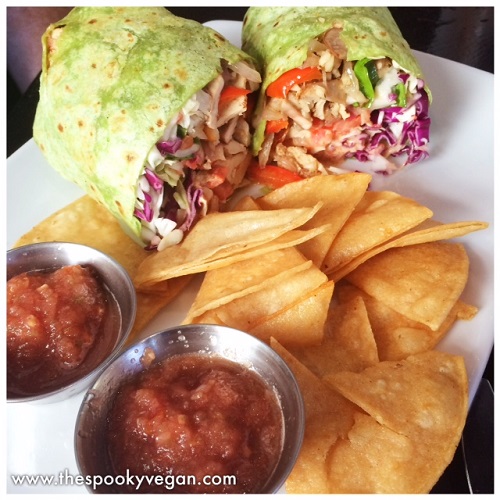 Mister Spooky ordered The Light Keeper ($14), which was a wrap filled with "seasoned chick-free strips, red bell peppers, red onions, and mushrooms in chipotle sauce topped with cabbage and pico de gallo in a spinach tortilla. Served with chips and salsa." He was one of the omnivores in the group and loved it! He is a big guy, and could only eat half of it, saying it was really filling! He loved the flavor of it and the chipotle sauce as well.

I would definitely go back to Vegan Nirvana and am glad I finally made it there! I want to go back and try their Ultimate Liberation (fish-free tacos), BLT Awakening (BLT sandwich), Enlightened One (chick-free sandwich with a yummy sounding pesto sauce), Egoless Saint (chick-free strips wrap), and their dessert, Blissful Ambrosia (raw cheesecake - unfortunately they were out when we went!).

Yay for another solid vegan option in Orange County! I highly recommend you check out Vegan Nirvana if you are in Huntington Beach or in Orange County. Protip: The Donuttery is just a few miles south on Beach Blvd. if you want to pick up some vegan donuts!

Vegan Nirvana doesn't have a website, but you can find more info about them on Yelp!
Posted by Sarah E. Jahier at 8:30 AM