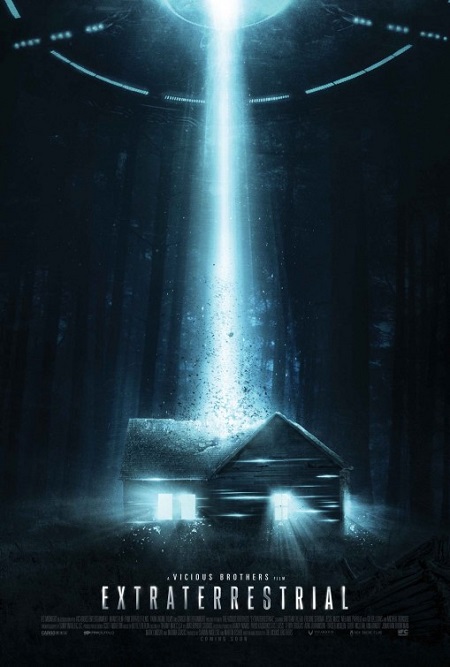 Alien movies are generally so hokey I normally don't watch them, but I decided to give Extraterrestrial a go as it was directed/written by the Vicious Brothers, who made the awesome Grave Encounters. When alien movies are done right they can be incredibly effective and entertaining, and I was pleased to find that Extraterrestrial fell into that category.

Synopsis: A group of college kids go to a cabin in the woods, see something crash-land out of the sky and go investigate. They are blown away when they find a downed UFO in the woods...but their wonder turns to fear when they notice alien footprints leading away from the crash site. When they return to the cabin they are forced to defend themselves, but end up pissing off the aliens even more, with wider, unforeseen consequences they may never have considered.

I like how this started with the typical "kids go into the woods, kids get dead" premise, but then turned that on its head once the aliens showed up. Though at the beginning some of the characters are annoying, you actually start rooting for them once the aliens start terrorizing them. We even get to see Michael Ironside play a nutty Vietnam vet with a pot farm who helps blow some aliens to smithereens, and who wouldn't have fun seeing that?! I also appreciated that this is an alien movie where you actually SEE the aliens! And when you do see them, boy, is it effective! And then there is the surprisingly downbeat ending, complete with a nice wink to The X-Files' Smoking Man!

I had a lot of fun watching Extraterrestrial, which was quite entertaining! You can watch it now on Netflix or purchase it on Amazon!
Posted by Sarah E. Jahier at 10:30 AM