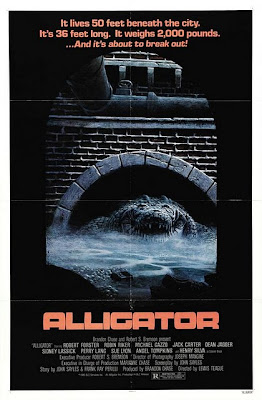 Remember the urban legend about alligators running loose in the sewers? The legend goes that gators were taken home by overeager kids wanted them as pets, only to be flushed down the toilet when they became problematic. The gators ended up in the sewers, eating stray pets, bums and the occasional kid and causing general hysteria.

The 1980 film Alligator follows this same premise, but also throws in some nefarious corporation illegally doing cruel experiments on animals and dumping their growth-hormone packed corpses into the sewers. Well, this is all well and good for Mr. Gator (whose real name is Ramon) since he has a steady diet of pumped up puppies that cause him to reach 30 – 40 feet in length! Still, the hormones cause him to have an insatiable appetite, so soon he is roaming the streets of Chicago, looking for his next bite! Who is gonna stop him? How ‘bout a misogynistic cop with a receding hair line (Robert Forster) and a gator scientist (Robin Riker) who happens to be the same kid whose daddy ended up flushing the alligator all those years ago!


Continue reading on Fatally Yours
Posted by Sarah E. Jahier at 11:04 AM