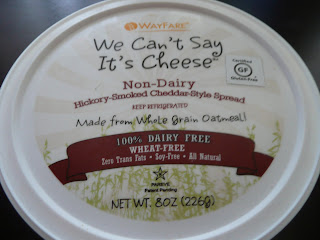 So, I finally decided to try We Can't Say It's Cheese's Hickory Smoked Cheddar-Style Spread. Bloggers, vegan magazines, etc. have been raving about this vegan, wheat-free, soy-free, 100% dairy free cheese-style spread made from whole grain oatmeal and when I saw it on sale at Mother's I snatched it right up!!

I bought some Milton's Multi-Grain Crackers to dip the cheese-style spread with: 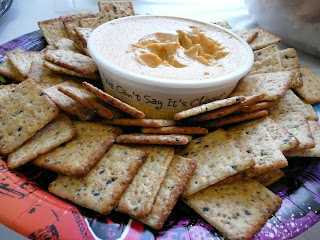 I was definitely surprised at how yummy the Hickory-Smoked Cheddar-Style Spread was!! The texture seemed just right and it had an excellent smoky, cheesy flavor! Now, I haven't had dairy-based cheese in years, so I don't quite remember what it tastes like [besides murder... :P ], but this spread seemed like an awesome analog. The hickory flavor added a lot to the "mmmmmmmmm" factor of this delightful tub of sunny deliciousness. I also tried We Can't Say It's Cheese's regular Cheddar-Style Dip (which I also served to non-vegans, with mixed results), but the hickory flavor is by far my favorite.

We Can't Say It's Cheese's Hickory Smoked Cheddar-Style Spread is a tasty snack and perfect for entertaining when you want a healthy and ethical substitute for cheese. If you are serving guests who happen to be non-vegan, I would recommend using the hickory spread above all other flavors...it really is the best and most closely matches dairy-based cheese spreads.

I won't be buying this cheddar-style spread except for special occasions or maybe if it's on sale, though. Surprisingly, I don't miss cheese all that much, but when I do I like Daiya, just because it's so versatile and can be used on anything from grilled cheese sandwiches to pizzas to salads to casseroles. We Can't Say It's Cheese only comes in the spread or dip, so basically you can dip crackers, chips in it or spread it on bread, flatbread, etc., but that's about it. I tried to put some of the regular Cheddar-Style on a baked potato, but it just didn't work out and Daiya would have been much better.

However, We Can't Say It's Cheese's Hickory Smoked Cheddar-Style Spread IS just as delicious as everyone's been saying and you should at least check it out once!

Visit the makers of We Can't Say It's Cheese, Wayfare Foods!
Posted by Sarah E. Jahier at 10:12 AM