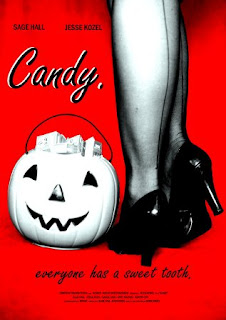 Candy is a short film that is just a perfect bite-sized treat for Halloween! Directed by Sage Hall and written by Jesse Kozel and Jenny Beres (all of which who star in the film), this short six minute film is visually stunning, mixing themes from noir, horror and even avant garde.

Set on Halloween night, it seems that Candy (Sage Hall) has created quite a spread of Halloween sweets for her son, Marcus (Jesse Kozel). Marcus is kind of a mama’s boy, though he seems fed up with Candy’s overbearing nature. Marcus has invited a “date” over, which irks Candy. However, to get back at her son she befriends the girl (Jenny Beres)…only, she doesn’t like the girl’s mouthy attitude and things soon get out of hand…

This is a beautiful and artistically made film! The black and white visuals really pop, especially with the use of Halloween decorations. It visuals really give it a retro feel, much like the vintage-inspired poster above. I also think the June Cleaver-like Candy character adds to its ‘50s style charm. However, it’s not all sweet…this short definitely has some bite to it!

I adored the conniving and evil character of Candy. Sage Hall played her perfectly, without going over the top. Plus the nice little open-ended twist at the end was great! Jesse Kozel also did a commendable job playing the loser Marcus and Jenny Beres was good as Marcus’ foul-mouthed date.

I also must mention the music, done by Abnorml Injustice, which was extremely atmospheric and added to the wonderful feel of the film. The music and visuals complemented each other superbly!

Considering this is a low-budget short film, I am amazed at the care that went into the details of the score, the set design, even the costumes! The filmmakers must truly be commended for making such a fun and breathtaking short!

Director Sage Hall has created a truly memorable Halloween-themed short film that’s visually striking, has a wonderful cast (herself included) and appears extremely polished and professional. No tricks here, this sweet treat is exactly what you want dropped into your Halloween bag!