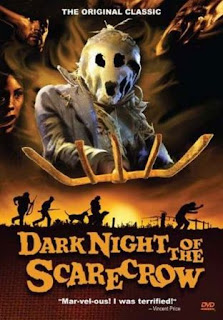 Dark Night of the Scarecrow, a 1981 made-for-TV movie, has finally been released on DVD! This film has been called one of the best made-for-TV movies, so I set out to see how it has held up over the years. I was also excited to check it out since it takes place around Halloween!

The film is about harmless simpleton Bubba (played by the recognizable Larry Drake), whose closest friend is a young girl named Marylee (Tonya Crowe). Though Bubba is in his 30′s, he still has the mind of a child. Though he is perfectly harmless, a few local yokels, including mailman Otis Hazelrigg (Charles Durning), perceive him as a threat. When Marylee is attacked by a dog, the men assume Bubba harmed her and form a lynch mob to hunt him down. Bubba hides in a field dressed and trussed up like a scarecrow. The ignorant men find him anyway and shoot him. Soon after, they find out Bubba didn’t hurt Marylee but actually saved her life from the dog. They go to trial, but are acquitted of all murder charges when they plead self-defense.

Soon after, all four of the men see a scarecrow that looks eerily similar to the one Bubba was dressed up as when they killed him. At first, they believe that Bubba’s mother or the District Attorney or even Marylee is out to avenge Bubba’s death. But as they each begin suffering unfortunate “accidents”, they start to believe Bubba is back from the grave.

Dark Night of the Scarecrow is a very well-done film, especially considering since it was made for television! This release has been cleaned up and looks stunning – thanks VCI Entertainment! I really wasn’t expecting much going into this film, but I was really pleasantly surprised at how much I enjoyed it. I especially enjoyed the “revenge” aspect of the film. No matter who was doing the avenging, whether it be the District Attorney, Bubba’s mama, Marylee or Bubba himself, it was just satisfying to see the four hateful men get what they deserved!

I suppose I was expecting a slasher-esque storyline with a killer scarecrow slicing its way through a small rural town, but thankfully Dark Night of the Scarecrow avoided this. Instead, it really focused on the unlikable, greedy and ignorant murderers. As mentioned above, it sure was nice to see them become paranoid, then scared, then eventually meet their end!

Since the film was made-for-TV (and aired on the CBS channel, no less!) there really isn’t any blood or gore to speak of. Those looking for a bloody slasher had better look elsewhere! However, it doesn’t need gore to be a good movie and therefore succeeds in other areas. For one, I loved the Southern Gothic feel of the film. The scarecrow costume was definitely creepy and the scenes where it is stalking the local yokels were appropriately tense. I also loved that it was set during Halloween. A few scenes are set at a Halloween party with revelers in costumes and the climax is set in a pumpkin patch, making this movie perfect to watch this time of year!

The story, written by J.D. Feigelson, was engaging and I was enthralled the whole way through. There wasn’t a minute where I was bored, despite the slightly slower pace of the film. In addition, the characters were well fleshed out (every single one of the actors did a fantastic job with their characters) and I liked the variety of characters Feigelson gave us. The direction was also well done by Frank De Felitta (best well-known for being the author of Audrey Rose) and never once did it feel like I was watching just a made-for-TV movie. Instead, the film had a very cinematic feel and no doubt could have been released in theaters and made a pretty penny!

Dark Night of the Scarecrow is a Southern-fried creep-fest that’s a fun treat this autumn! It is one of the few “killer scarecrow” movies I’ve seen that is actually GOOD and worth seeing more than once. This film will definitely become a Halloween staple in my house and I look forward to the tradition of watching it every fall.