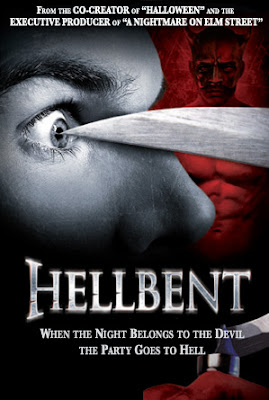 Most well known for being the first gay slasher movie, HellBent is a by-the-numbers horror flick that nevertheless is a blast to watch! Unlike typical slashers, the characters are extremely likable and you care about what happens to them. The wild setting of the West Hollywood Halloween carnival adds to the thrilling atmosphere of the film and the spectacle of muscular men all done up for All Hallow’s Eve kept this girl spellbound! HellBent has to be the horror film with the hottest male cast ever!

The night before Halloween, a gay couple is brutally murdered by a man wearing a devil mask. Not letting the murders dampen their Halloween spirit, the next night four friends head off to celebrate at the annual Halloween Carnival. Responsible Eddie (Dylan Fergus), shy Joey (Hank Harris), outgoing Chaz (Andrew Levitas) and model Tobey (Matt Phillips) all dress to impress and join the flamboyant festivities despite there being a killer on the loose. After inadvertantly making themselves targets for the killer, the men are stalked and methodically killed by the devil-masked murderer.

Sure, the plot is a little thin, but aren’t all slashers? The difference with HellBent is that is actually makes the effort to develop its characters and make them likable. Writer/director Paul Etheredge-Ouzts definitely did an outstanding job with his characters. He makes them human, each with their faults and drama going on, but each very likable. The actors also did a wonderful job at portraying these characters. There were no stereotypical, over-the-top theatrics, just believable characters. I was especially impressed with Matt Phillips’ portrayal of Tobey. As the film progresses, his confidence slowly dwindles and leaves him very vulnerable. Each of the actors had a chance to delve a little deeper than most horror films would have let them and show a spark of humanity in their characters.

The film is low budget and it shows in some places. The picture is always a bit grainy and the lighting in some of the scenes is a little off. Still, despite the film’s budgetary constraints, for the most part it looks great! There are some stunning shots like the killer’s silhouette in the woods, a disorienting dance floor scene and the shots of the Halloween parade and carnival, among others. Despite the story being a little stale and familiar, the candy-colored visuals kept my interest the entire time (not to mention the amazing-looking actors!).

The violence and gore are pretty middle-of-the-road in HellBent. While there are some pretty impressive decapitations and stabbings with the killer’s weapon of choice, a hand scythe, they aren’t really anything that horror fans haven’t already seen before. Nevertheless, the fact that the audience actually cares about the characters makes the murders that much more effective. We are affected by them a bit more because we come to care about the guys. My favorite scene is the dance floor murder, where one of the characters gets murdered under the disorienting strobe light. We’ve all experienced the dizzying effects of strobe lights, and it’s not hard to imagine that a murder could be pulled off under our very disoriented eyes under one of these brightly pulsating lights.

For those fuddy-duddy’s that don’t think they can handle a “gay” horror movie – relax! There is no full-frontal nudity and just one hinted at sex scene towards the beginning of the film. The rest just shows kissing and not much else…so quit worrying your pretty little head and just enjoy the film! There is much fun to be had with HellBent!

If you are looking for a fun, Halloween-themed horror movie with a bunch of hot guys in it, HellBent is definitely hotter than Hell!