31 Days of Halloween: The Happy Haunting of America (2007) Documentary 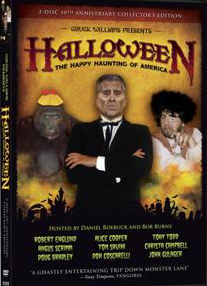 Halloween is my favorite holiday, one that gets me giddier than I already am and truly brings out the kid in me (I think the extra sugar rush helps, too). Candy corn, caramel apples, some hot cider and a few spooky movies are all I need this time of year. Another staple of the season for me is a Halloween Haunt. Wherever you live, big city or small, you’re bound to have a local haunted house, cornfield, hayride, maze or amusement park. It just wouldn’t be Halloween without a trip to once of these haunts!

Which is why I was so delighted to receive Halloween…The Happy Haunting of America, a 2-disc DVD that celebrates everything Halloween-y!! It features tours of some of the best haunts in the United States, as well as interviews with horror celebrities like Doug Bradley (Pinhead from Hellraiser), Angus Scrimm (The Tall Man in the Phantasm films), Tony Todd (Candyman), Robert Englund (most famous for playing Freddy Krueger in Nightmare on Elm Street), Don Coscarelli (director of Phantasm, Bubba Ho-Tep), Christa Campbell (2001 Maniacs, Death by Engagement, Hallow’s Point), John Gulager (director of Feast), special FX maestro Tom Savini, shock rocker Alice Cooper and so on.

The documentary is hosted by Daniel Roebuck and Bob Burns, no strangers to the horror and sci-fi businesses. Both are hardcore Halloween fans, and take a very fun approach to the spooky season! The original documentary that was released ten years ago is covered on disc one, complete with a Dr. Shocker intro that pays homage to the midnight movie monster and mad doctor TV hosts of yesteryear. The documentary has been remastered, and on disc two one can find a bonus 10th anniversary version, complete with ten new haunts and a tour of The Magic Castle in Hollywood.

My favorite parts of the documentary were the interviews with horror icons where they shared childhood Halloween stories. Hearing about their favorite costumes, how they trick ‘r’ treated and what the holiday meant to them was just plain FUN! I also enjoyed the segment on Don Post Studios and the other mask makers that were featured. The story of how long they’ve been around and how they got started was fascinating!

I found the weakest part of the film to be the presentation of the haunts. There was a quick intro for each, but instead of telling us more about each individual haunt, there is just music over the scenes. I really wish filmmakers Chuck Williams and Daniel Roebuck had decided to go more in-depth with each haunt. Just watching scenes of spooky characters and places set only to music got really repetitive after a while, no matter how cool each haunt looked.

Except for a few shoddy production values, that was my only complaint and I wholeheartedly enjoyed this documentary and all its extra features. Those that adore Halloween will definitely dig this DVD, but even the more casual viewer will fall into the Halloween spirit with the help from The Happy Haunting of America!