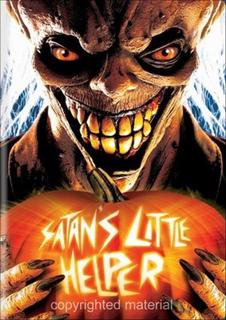 I love a good Halloween horror movie, and I’m not talking about your usual haunted house flick. No, I’m talking about movies that put you in the spirit to spook, movies that haunt your dreams with visions of Halloween and really inspire you to get in the season.

One such gem of a Halloween film is Satan’s Little Helper, part perverse satire, part vicious horror film and a whole lotta fun!

Young Dougie (Alexander Brickel) is obsessed with a video game called Satan’s Little Helper, in which a character helps Satan send people to Hell. It’s Halloween day, and Dougie and his kooky, spacey mom (Amanda Plummer) are picking up Dougie’s sister Jenna (Katheryn Winnick), who is back home from college just so she can take Dougie trick or treating. Problem is, Jenna’s brought her boyfriend Alex (Stephen Graham) home for the holiday and Dougie is pissed…so he storms off to wander the neighborhood alone, clothed in his own Satan costume.

Dougie comes upon a creepily masked serial killer who is going house-to-house, killing people and then re-arranging them on front lawns and porches as macabre Halloween decorations. Dougie thinks he’s finally found his Master and brings Satan home to meet mom and sis. They think the person under the mask is Alex, trying to please Dougie, so they think nothing of the weird behavior. Dougie goes on a crime and killing spree with “Satan,” thinking it is all just a game…until his “Master” attacks his family that is.

Satan’s Little Helper is a fun, darkly humorous flick that borders on satire. You’re never quite sure if director Jeff Lieberman (who has created other cult classics like Just Before Dawn, Squirm, Blue Sunshine) meant it as a social commentary on kids being desensitized to violence or if he just wanted to have a bloody good time, but whatever the case he succeeds in creating a cult classic!

Though the character of Dougie is unbelievably naïve at times (what kid, no matter how desensitized, would think that an old lady being hung out of a window is all part of a game and not real?), I couldn’t help but get sucked into the imaginative story. The whole Halloween setting really helps with the story, especially due to the fact that everyone is in costume and things are expected to be gruesome. The killer, whom we never learn much about, has it pretty easy since no one can see his face and no one really takes the dead bodies he leaves in his wake to be real. My favorite part is when “Satan” gruesomely kills a black cat (very cringe-worthy in of itself!!) and uses its blood to write “BOO” on the side of a house he’s already decorated with a very real body. A lady with her two trick or treating kids asks our killer to pose for a picture, which he obligingly does!

Now, this is by no means a perfect film. For one, the character of Dougie does grate the nerves with his stupidity. For another, the acting at times isn’t all that great. The film also has a low-budget look (it was shot on digital in 2004) that will turn some viewers away. The story is engaging, but towards the end it starts to drag a little bit. Still, despite these flaws Satan’s Little Helper is an extremely fun and clever horror movie.