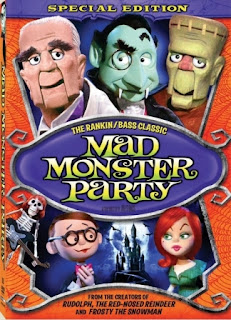 Looking for something ooky and spooky to watch this Halloween? Look no further than the kooky Mad Monster Party! Created by the same folks that brought you stop-motion animation Christmas specials like Rudolph, the Red-Nosed Reindeer, Mad Monster Party is a howling good time for the whole freaky family!

After finding the secret of life, Baron Von Frankenstein (voiced by Boris Karloff) has finally discovered the secret of destruction (“I, Baron von Frankenstein, master of the secret of creation, have now mastered the secret of destruction”)and is inviting all his favorite monsters to his castle for a celebration! He also plans to announce that he is retiring and bequeathing all his secrets to his (gasp!) human heir, the clueless Felix Flanken (voiced by Allen Swift, who also voiced most of the monsters). The Baron’s assistant, lovely redheaded Francesca (voiced by Gale Garnett), doesn’t take too kindly to the news. She and the other monsters, including Dracula, Frankenstein’s Monster and his Mate (voiced by Phyllis Diller), The Wolf Man, The Mummy, The Invisible Man, Dr. Jekyll/Mr. Hyde, The Hunchback, The Creature from the Black Lagoon and so on, plan on taking Felix out before he inherits the Baron’s secrets!

Mad Monster Party is a mad, mad, mad little movie that is a joy to watch around Halloween! With newly restored editions, I really think they should play this on television around Halloween just like they play all of the other stop-animation movies around Christmas! It’s got some spiffy musical numbers, lots of adult humor and overall just looks amazing!

The character design is amazing, especially considering how many monsters are running around. Besides those mentioned above, there is also the hilarious Chef Mafia Machiavelli (“Here we have the antipasto – black widows pickled in their own poison, smoked lizards and snakes, and marinated mice.”), Yetch, the creepy, Peter Lorre-inspired servant (Yetch: “It’s me, your Don Juan.” Francesca: “I Don Juan to look at you”.), a groovy skeleton band called Little Tibia and the Fibulas (“It’s the mummy!”) and, of course, the uninvited It that crashes the party later in the film!

The scope of the film is very ambitious, and seems much bigger than other Rankin/Bass productions like The Year Without Santa Claus or Rudolph, The Red-Nosed Reindeer. The setting of Baron Von Frankenstein’s towering castle, with its crocodile-filled lagoon and man-eating flora and fauna, is absolutely stunning and really invokes nostalgic feelings from childhood, especially when accompanied by the stop-motion animation! This is definitely one for the spooky kid in all of us!

If you are looking for some light-hearted fare this October, Mad Monster Party is one classic film to check out! Even though they slip some decidedly adult humor in there, it is still suitable for young tots, too! Anyone looking to regain some Halloween spirit should definitely watch Mad Monster Party – it never fails to put me in a kooky mood!