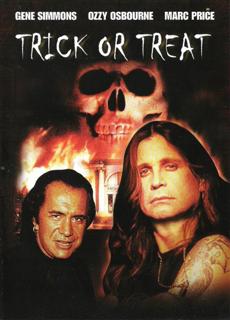 To get in the Halloween spirit, I decided to watch the festively named Trick or Treat, the one that features Ozzy Osbourne and Gene Simmons in cameo roles. Trick or Treat isn’t a great movie by any means, but it has a certain spellbinding charm that keeps it entertaining, and not just for metalheads.

Eddie (Marc Price, or “Skippy” from Family Ties as most people remember him) is a metalhead outcast at his high school. The jocks always pick on him and pull cruel pranks on him, like pushing him naked out into the school gym when the girl’s volleyball team is practicing. His outlet for all his anger and pent-up frustration is metal music, and his idol is rock star Sammi Curr (Tony Fields). When Sammi dies in a hotel fire, Eddie is devastated. A radio DJ (Gene Simmons) gives Eddie the studio master of Sammi’s unreleased record to cheer him up. After playing the record backwards, Eddie unwittingly unleashes the spirit of Sammi. At first, Eddie finds Sammi to be useful at getting revenge on the jocks, but soon realizes Sammi is evil. Sammi becomes more and more powerful until he materializes in the flesh on Halloween night to raise hell…

Trick or Treat was quite a surprise and I really found myself enjoying it. Though there aren’t any scares, its entertainment value alone makes it worth watching. The story is pretty original and I love how the filmmakers took a look at metal music and the big controversy that surrounded it in the ‘80s.

My one big gripe with the film was the poor pacing at the beginning. The first 30 – 45 minutes just crawl by and consist of scenes of Eddie being tormented at school, then getting home and blaring his metal music, then going back to school and being hassled again and returning home to listen to more metal in his gloomy room, rinse, repeat…you get the idea. I think just one scene of this would have elicited enough sympathy for Eddie at which point we could have gotten to the real action of the film.

The real action doesn’t start until somewhere around the one-hour mark, when Sammi is finally unleashed and starts strutting around, zapping people. My favorite part is when Sammi crashes the high school’s Halloween dance and puts on a killer performance – literally! He shoots electrical charges out of his guitar that basically pulverize his victims. He can also move through electrical currents and can get you pretty much anywhere there’s electricity.

The logistics, as well as the how’s and why’s of Sammi’s satanic, electrifying ways are never quite explained, but that niggling little problem is easily quieted by the overall fun you’ll have watching this flick. Besides a few unexplained, illogical plot points and a slow start, the film’s story (by Rhet Topham, with the screenplay written by Joel Soisson, Michael S. Murphey and Rhet Topham) is actually quite inventive. I mean, where else could you find an outcast metalhead conjuring up his dead rock star idol with a satanic ritual, causing irreparable harm to the neighborhood on Halloween? Not to mention all the killer ‘80s hair metal fashion – leather, chains, piercings, tattoos, and who can for get the big, frizzy, poofy hair!

The music, performed mainly by Fastway, is actually pretty good. It’ll put you in that metal state of mind! And, of course, the cameos by Ozzy Osbourne (as a conservative, religious/political pundit speaking out against metal music on TV) and Gene Simmons (as a radio DJ) are pretty enjoyable as well!

Surprisingly, the acting (even by Osbourne and Simmons) is well done. Marc Price plays a convincing teenager that’s fed up with the status quo and the mainstream. He is very relatable and I know many people (myself included) can relate to him and what he is going through in high school. I also loved Tony Fields’ portrayal of Sammi Curr…he completely nails it and had me checking on IMDB to see if he really was a rock star! He is just that good!

For a nostalgic kick, Trick or Treat is a fun movie that’ll take you back to hair metal’s heyday. Don’t expect any scares, but you’ll definitively be entertained by Trick or Treat’s music and unique story.

Metalhead or not, Trick or Treat is a definite horror movie treat!