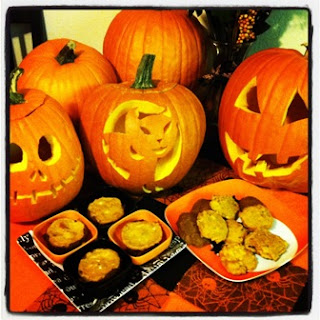 A few of the pumpkins we carved plus my Pumpkin
Cheesecake Brownies (left) and Pumpkin Chocolate
Chip Cookies (right)!

This past weekend Mister Spooky and I hosted a pumpkin carving party for our close friends. We are taking this year off from throwing a Halloween party, but we still wanted to do SOMETHING to get all of our friends together and celebrate the spooky season. And what better way to do so than pumpkin carving?!

Since it was a casual affair, I decided to go relatively easy on the treats. I made some vegan pumpkin cheesecake brownie bites (see recipe below) and vegan pumpkin chocolate chip cookies. Both were HUGE hits! I also served orange-colored chips to go with the pumpkin theme (Spicy Sweet Chili Doritos are vegan!), hard cider and regular spiced cider (Trader Joe's brand is yummy!). 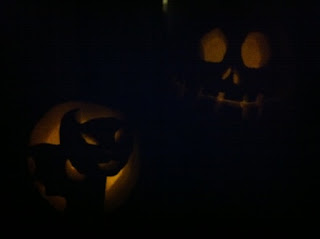 My bat kitty and Skellington-esque pumpkins!

While carving our pumpkins we watched Halloween-themed movies like The Simpson's Treehouse of Horror, Night of the Demons and Trick 'r' Treat! It was a wonderful, relaxing and fun night with friends!

Check out the recipe below for the pumpkin cheesecake topping! The original recipe was a bit vague, so I've fleshed it out a bit more (after some trial and error) to make it easier for you, dear reader! 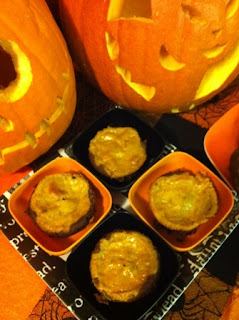 Vegan Pumpkin Cheesecake Brownies!
I served mine in individual small bowls to
make devouring them easy for our guests.

First, start with a basic vegan brownie recipe (I posted a TO DIE FOR recipe for pumpkin brownies HERE!). After you have that batter all ready to go you can start on the pumpkin "cheesecake" topping.

Heat oven to 350 degrees. Use vegan shortening to grease a cupcake pan or use cupcake liners. Alternately, using a regular 8x8" brownie pan (or 9x13" if you are making a bigger batch) works as well.

Using a food processor, blend the vegan cream cheese, silken tofu and canned pumpkin until smooth. Add the remaining ingredients (sugar, spices and vanilla) and mix until well blended. If you want, you can even add a little orange food coloring (just make sure it's vegan) to give it a more intense orange color!

Bake the brownies according to your brownie recipe (usually around 30 - 35 minutes) and take out when a toothpick stuck into the middle comes out clean.